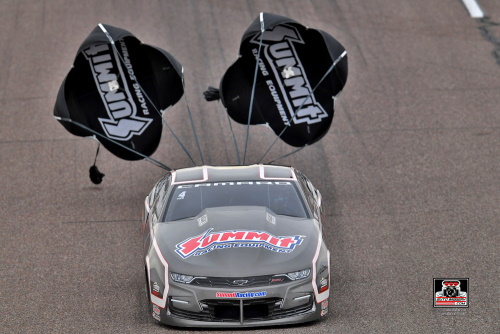 PHOENIX, Ariz.  (February 24, 2020) – Sunday at the 36th annual NHRA Arizona Nationals saw a tremendous shift of good fortune that nearly resulted in victory for KB Racing-powered Bo Butner, who reached a Pro Stock final round for the 25th time in his career. Jason Line, driver of the silver Summit Racing Chevrolet Camaro, was on a similar path on the opposite side of the ladder but ended his day in the semifinals.

Butner, who exited in the first round at the season-opener, made a solid move in the standings at Wild Horse Pass Motorsports Park. After qualifying in the No. 5 position with his Strutmasters/Jim Butner Auto Group Chevrolet Camaro, the 2017 Pro Stock champion felt that he was lined up for a good performance on Sunday in the Valley of the Sun. But in the first round of eliminations, the engine in his Pro Stocker detonated as he tucked away a victory over a red-lighting Val Smeland.

In round two, Smeland’s teammate, Kenny Delco, also fouled out to send Butner ahead with another fortunate win light as he got loose down track and slowed to a 6.863, thereby forfeiting lane choice in the semifinals to Alex Laughlin. There, Laughlin broke as he left the starting line, and Butner surged ahead – but as the finish-line stripe came into view, his Strutmasters-branded Chevy began to slid on the racing surface. Butner called on his years of experience behind the wheel to keep hold of his racecar, and it veered scarily close to the centerline and the timing blocks, but he successfully maneuvered his way to the stripe for the win light.

“We blew up first round, got real loose and shut off second round, then third round I didn’t even know Alex broke. My car came within a half-inch of the centerline, just blowing the tires off,” said Butner. “I’ve been in no-prep races, and that’s exactly what this was like – maybe worse. I couldn’t have taken it another inch.”

“I never would have imagined that today would go this way, but that’s just how this sport is; you never know what’s going to happen,” said Butner. “It was our day until the end, but the guys did a great job. We had to throw a motor in real quick between rounds today, and they did a good job. We’ll go on to Orlando for the World Outlaw Nationals before Gainesville and do some testing. There are a lot of cool things coming up, and we’re pretty fired up.”

Line’s Sunday started from the No. 6 position and came with a first-round meeting with Deric Kramer. When Kramer fell into violent tire shake as he left the starting line, the silver Summit Racing Chevy made haste down the quarter-mile. Line battled through some slippery conditions as he neared the final timer but still got the win with a 6.649, 186.28. In the second stanza, he used the third-quickest pass of the round to advance on a tire-spinning Cristian Cuadra before he was halted in the semis by Enders with another good pass, a 6.582 at 209.33.
“It wasn’t our day today, but so far our silver Summit Racing Chevy Camaro is showing that it can go rounds,” said Line. “A final round in Pomona, and then semifinals here – hopefully that means we’re building some momentum. It’s early yet, but we feel like we aren’t too far off the mark with my car. We’ll be very busy in the next couple of weeks, and we expect that we’ll see results that show that soon.”

Greg Anderson, driving the red Summit Racing Chevrolet Camaro, was stopped short in the first round as the tired overpowered the racetrack as soon as he dropped the clutch.

“We struggled in qualifying, then today we didn’t back it down enough and it bit us,” said four-time Pro Stock world champ Anderson. “It was a disappointing weekend, but the fact of the matter is that we don’t have time to hang our heads, and that’s not our style. We’re excited to put this race behind us and get to Orlando in a couple of weeks for the World Outlaw Nationals. We can really use what we do there as an opportunity to test, so we want to be good and ready in every way we can before that. We have work to do, but that’s something KB Racing is good at. We rise to the challenge.”

The next race on the 2020 NHRA Mello Yello Drag Racing Series tour will be the Amalie Motor Oil NHRA Gatornationals at Gainesville Raceway, March 12-15.