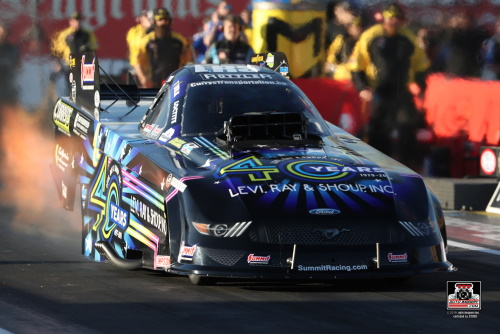 PHOENIX, Ariz. (February 24, 2020) – Tim Wilkerson had quite a racecar at this weekend’s 36th annual NHRA Arizona Nationals, and he is not known to falter at the starting line. The 25-year nitro Funny Car veteran hasn’t had a foul start since the fall event in Las Vegas in 2018, but in the second round of eliminations at Wild Horse Pass Motorsports Park on Sunday, he got a glimpse of red as he left the starting line .014-second too soon.

The Levi, Ray & Shoup Ford Mustang was so capable throughout the weekend, and Wilkerson was proud to wheel it to three consistent rounds of qualifying. In the final qualifying session, he scored a pair of bonus points as the second-quickest car of the round. His 3.889-second pass at 329.10 mph was good for a start from the No. 7 position and a first-round meeting with Alexis DeJoria.

Wilkerson and recently returned DeJoria had been friendly but steady rivals before she left the sport two years ago, and she held a historical advantage heading into the round. Wilk knew he had one of the best racecars he’s had in a long while, though, and he’s at the top of his game in personal performance. He left the starting line first with his LRS Ford and didn’t look back, crossing the finish line stripe with a 3.979, 286.25 to a troubled 6.045, 111.71.

As he approached the stripe, though, his engine went silent, and he was forced to figure out what, exactly, had gone wrong before coming to the starting line for a second-round meeting with John Force.

“It just back-sided a piston the first round in the burnout, and it actually died at like 2.8 seconds,” said Wilkerson with a hint of incredulity. “It just diesled it, and it shut off, and my nose was in the dash. I was like, come on…. finish line. We were just really lucky that [DeJoria] didn’t make a better run.”

Wilkerson was just a touch too quick at the starting line in his match with Force and negated a strong 3.887-second pass at 329.91 mph. The team owner/crew chief/driver is still elevated leaving Phoenix.

“It’s doing what we’re asking of it, so I’m really optimistic,” said Wilkerson.

The next race on the 2020 NHRA Mello Yello Drag Racing Series tour will be the Amalie Motor Oil NHRA Gatornationals at Gainesville Raceway, March 12-15.