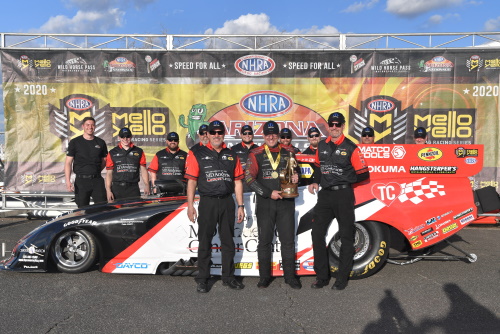 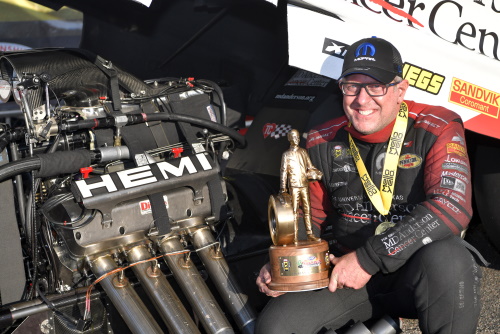 From his No. 4 qualifier position, Johnson Jr. drove his MD Anderson Dodge Charger SRT Hellcat past Paul Lee and Bob Tasca, then used a holeshot win over DSR teammate Ron Capps to set up a final elimination battle against Beckman. Johnson powered past his DSR opponent, who lost traction early, to make his way to the winner’s circle in the second event of the season.

The early season win provided some relief for Johnson and his team, who were looking to recover quickly from a difficult 2019 Countdown to the Championship that followed a promising regular season. 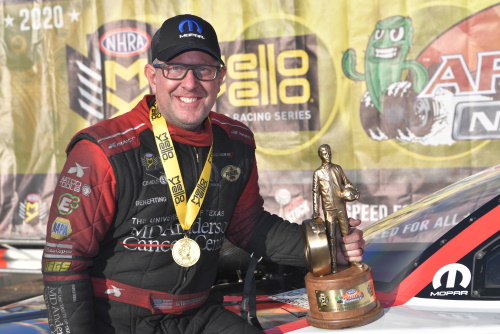 “We had such a good car last year and we didn’t finish well at all, so to come out strong and get that out of the way right off the bat and know how good a car you have right now is great,” said Johnson who jumps four spots into second place in the Funny Car championship standings with his efforts this weekend.

“Now we just shift to maintaining it and learn from the mistakes you make. I think we learned really well what we did wrong last year, and what we needed to do to fix it. It’s nice to be able to know that you did fix it.”

In the final against Johnson Jr., Beckman initially had the advantage as they launched off the starting line but lost traction in the Infinite Hero Foundation Dodge Charger SRT Hellcat and, while he made efforts to pedal it, was unable to recover control quickly enough.

Coming off consecutive wins in both the 2019 season finale and the 2020 season opening national event at Pomona, Beckman’s runner-up finish to his teammate keeps him atop the Funny Car championship standings with 220 points.

The defending Arizona Nationals title winner, Matt Hagan, drove his Mopar Dodge Charger SRT Hellcat Funny Car to the provisional pole position with Friday’s second qualifying run and an elapsed time pass of 3.859 seconds at 331.61 mph. That time stood through Saturday’s qualifying session, shortened to just one run due to rain, to give him his second No.1 qualifier of the year, the 38th of his career and his second at Wild Horse Pass Motorsports Park.

In eliminations, Hagan beat his first round challenger, Jeff Diehl, off the starting line but, as he began to power down the lane, his HEMI®-powered ride began to pull toward the centerline where it clipped a timing block to disqualify the run and bring his race day to a premature end. Despite the quick exit, Hagan remains fifth in points.

After qualifying eighth, Ron Capps, drove his Dodge SRT Hellcat through the eliminations ladder with a win over J.R. Todd in the first round, followed by a quarterfinal victory against Jeff Diehl. That quarterfinal victory earned Capps a 750th career round win since making his professional debut in 1995 at this track while racing Top Fuel and earning his first round win against Joe Amato.

Capps then faced-off against his DSR teammate and eventual event winner, Johnson Jr., in the semifinals for a solid side-by-side battle to the stripe. While he didn’t get the win, the result propelled Capps to the fourth spot in the Funny Car points standings.

In Top Fuel action, for a second consecutive national event, Leah Pruett drove her DSR Mopar Dodge//SRT dragster to the third spot on the eliminations ladder to put herself in a good position to have a solid race-day showing. Bolstered by the memory of her first career Top Fuel victory at Phoenix in 2016, a No. 1 qualifier position in 2017, and runner-up finish last season in 2019, Pruett made quick work of getting through the first round and past Doug Foley with a solid 3.654-second run to make her way to the quarterfinals to face Billy Torrance. Once again, Pruett made another solid run with a 3.688 second elapsed time run, but it wasn’t quite enough to beat her opponent to move further through elimination rounds. Pruett remains third in the Top Fuel standings.

With DSR Mopar Dodge//SRT entries top-five in championship points and looking to continue to build on the momentum generated from two back-to-back Funny Car wins and No.1 qualifier positions to open the season, they now prepare to head to the east coast for the third of 24 events on the 2020 NHRA Mello Yello Drag Racing Series schedule, the NHRA Gatornationals in Gainesville, Fla., March 13 – 15. 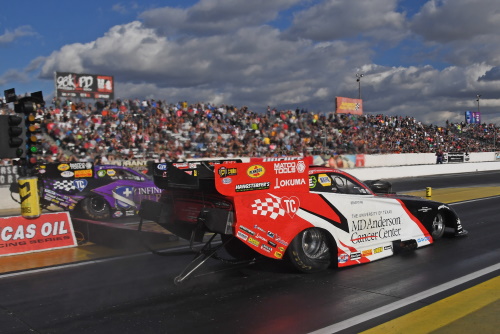 “We had a good car the last qualifying run and it showed us that we had a solid car. Coming up here today we had a lot of confidence. To go out there first round and lay down a solid number really happy with that. We weren’t low e.t. first round but we were real close and to come out second round and set low e.t. so we knew we had a solid car. As a driver, going into each round knowing you’ve got a car that’s going to perform, it makes your job a little easier and gives you a little less stress. The guys did a great job. I mean, even in Pomona we had a good car and just dropped a cylinder second round. We even had a little issue with that in qualifying here and they worked hard to fix that and now it’s running really well and consistent. They did their homework over the off-season.”

“Yes. Especially since we weren’t happy with the way finished last year so it is (satisfying). I was actually very relieved when I turned the corner down there and it felt like it was a little bit of pressure relief. We had such a good car last year and we didn’t finish well at all so to come out strong and get that out of the way right off the bat and know how good a car you have right now. Now we just shift to maintaining it and learning from the mistakes you make. You try to learn from them. I think we learned really well what we did wrong last year, and what we needed to do to fix it. It’s nice to be able to know that you did fix it.”

“How do you hang your head? We still have the best car and the points are showing that. We didn’t have the best car here this weekend. We actually struggled a little bit, but it goes to show you great teams pull out all the stops on race day and figure out how to make it happen. I’m happy for my teammate and his MD Anderson car. We didn’t give it to them. They earned it. But we’re going to be tough to beat the entire rest of the year.”

“For this team, considering where we were and how few runs we had coming in here, we’ve made huge strides for Rahn Tobler. Even though we lost that close race in the semifinals, he was ecstatic and it really feels like we have his race car back and that makes everyone around here feel good. We had a really large clutch wear problem that we’ve been fighting and he finally got it down to where he was comfortable and when he does that, the car goes out and runs 3.80s like that.

“Just a close drag race. I accidentally went in and lit the pre-stage and stage lights against TJ and just kind of sat there. Him and I have raced and been teammates for a long time. He gave me a second before he went in. It was just letting two cars do the talking. The good thing was it was a DSR car going into the final against our teammate (Jack Beckman). Unfortunately, we lost a close one. But, I feel really comfortable and good and Rahn Tobler is happy and excited to get to Gainesville.”

“My guys did a heck of a job today; the car was on a really good run. It was just one of those deals where it got inside on me, and I couldn’t get it back. I thought I lifted soon enough not to hit anything, but a header brushed a timing block, and that DQ’d us. But, a heck of a job for this Mopar team to run such a good number like that on race day. We were No. 1 qualifier, have such a good race car, and I hate that I let my team down like that. It’s race day; I was just trying to get to the finish line first. All in all, we’ve got a great car, things are going in the right direction, the guys are working hard, the parts and pieces are working well, and it’s all coming together.”

“We closed out our Sunday much earlier in the afternoon than we had wanted. Phenomenal performance by the Mopar team in E1 with that 65. I’m disappointed in myself with what happened in E2. Putting that double-bulb on, that was unintentional. I got antsy, and I two-stepped it and was late on the tree. On the return of that, I can guarantee, Gainesville will be nothing but ‘heads down,’ and I’ve got two cars to run. It would be amazing to put them both in the winner’s circle, but the car and the team are doing a phenomenal job. I’m trying to perfect my weaponry – my driving perspective, and I didn’t conquer that this weekend in the second round of eliminations, but one thing is for sure, I guarantee you that I will.”

Dodge//SRT
For more than 100 years, the Dodge brand has carried on the spirit of brothers John and Horace Dodge. Their influence continues today as Dodge proudly offers a complete lineup of performance vehicles that stand out in their own segments. For 2020, Dodge literally expands its high-performance Charger model lineup, adding a Widebody exterior to Americas only four-door muscle car. The 2020 Dodge Charger SRT Hellcat maintains its reign as the most powerful and fastest mass-produced sedan in the world.