GAINESVILLE, Fla. (March 3, 2020) –After a successful trial at the NHRA Winternationals in Pomona this year, the NHRA Wi-Fi For All Zone will be featured at the Amalie Motor Oil NHRA Gatornationals in Gainesville, Fla., March 12-15. This is the next step in a long-term rollout plan to enhance the fan experience through reliable wireless internet service throughout the pits, midways and grandstands.

At Gainesville Raceway, NHRA has invested in fiber networking and partnered with PMY Group to provide over 750,000 square feet of wireless internet access during the Gatornationals. NHRA has also partnered with GoZone WiFi to learn more about the needs and wants of guests and fans at NHRA events. 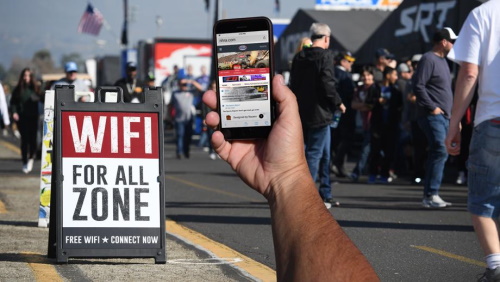 “NHRA national events have a large footprint and some are in areas with limited cellular data service, making accessing the internet a challenge,” said Brad Gerber, vice president of sales and chief development officer for NHRA. “We knew it was high time to begin exploring how best to invest in the infrastructures necessary to provide consistent and convenient wireless internet to our fans, teams, sponsors and partners.”

More reliable wireless internet service will augment the fan experience with easier access to event information and faster online posting. Additionally, the NHRA Wi-Fi For All Zone will help make sponsor activations in the midway more interactive and engaging.