At this time last year, Sheppard was leading by just 16 points in the overall standings after winning four consecutive races at Volusia Speedway Park. This year, Sheppard has doubled that advantage, leading second-place Darrell Lanigan by 32 points. Ricky Weiss sits 54 points behind in third, while the Scott Bloomquist Racing duo of Chris Madden and Scott Bloomquist round out the top five, 90 and 110 points back, respectively.

Sheppard and the Rocket1 Racing team do have a lone tour victory to their credit this season, which they inherited in the first race at Volusia after original winner Dennis Erb Jr. was penalized. However, when glancing back into the history books, it has now been 15 consecutive World of Outlaws races since the last time Sheppard was the first car across the finish line. 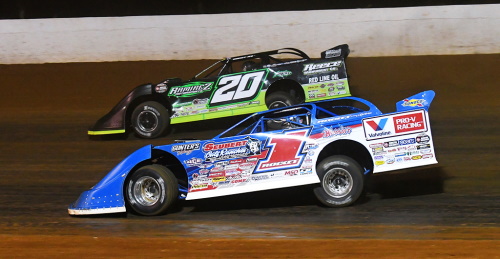 This stands as the longest period of time without a natural Feature win for 27-year-old Illinoisan since joining the full-time roster in 2017. Back on August 30 of last year, Sheppard won the opening night of action at Sharon Speedway’s Battle at the Border, and he hasn’t crossed the finish line first in an Outlaws race since. Previously, his largest gap between wins as an Outlaw was just five races, in 2018 – May 3 (3rd win) to June 14 (4th win).

But despite his absence in Outlaws Victory Lane over the past few months, he’s managed to expand the points lead he claimed in season-opening event Vado Speedway Park, thanks to an incredible amount of consistency, similar to last year’s domination on the tour.

Those numbers are staggering. But if history is any indication, there’s one man in particular who’s proven himself a thorn in the side of Rocket1 over the past few seasons, and he goes by the name of The O-Show.

Other than Sheppard himself, Owens is currently one of the hottest Dirt Late Model drivers in the country. Three consecutive DIRTcar Nationals victories at Volusia just doesn’t happen every year, let alone to someone who’s never won there before. But Owens did exactly that, outrunning Sheppard and the Outlaws three times last month. Now, he’ll look to do it again Saturday night at Smoky Mountain.

Looking back on historical trends, in Outlaws races since Sheppard’s full-time debut in 2017 where Owens has won, Sheppard has finished second to him three times – including twice just last year.

Sheppard will be aiming to repeat Friday at Duck River, and then do something on Saturday he’s never been able to do, beat Owens at Smoky Mountain.

Don’t miss a moment of the action! Subscribe to DIRTVision today and watch every World of Outlaws Morton Buildings Late Model Series event LIVE in 2020!

THIS WEEKEND AT A GLANCE

Duck River Raceway Park is a quarter-mile dirt oval. The track record is

Tickets for both events can be purchased at the gate on race day; Duck River attendees can also purchase general admission or pit passes online at the track’s website.

After the Tennessee doubleheader, the Outlaws turn to another Southeastern showdown at Volunteer Speedway on Friday, March 27 and Cherokee Speedway on Saturday, March 28.