It is the fourth of 24 events during the 2020 season, and the event has become one of the biggest spectacles in the sport. Fans have flocked to the Las Vegas spring race for the last two years, as the first-class facility widened to four lanes in 2018 to showcase four 11,000 horsepower nitro-burning machines powering down the track simultaneously. It’s provided one of the most thrilling moments after another, giving fans one of the most unique and exciting experiences in all of motorsports.

For the first time in NHRA history, Top Alcohol Dragster and Top Alcohol Funny Car will compete in the four-wide format bringing new levels of competition into these powerful categories. 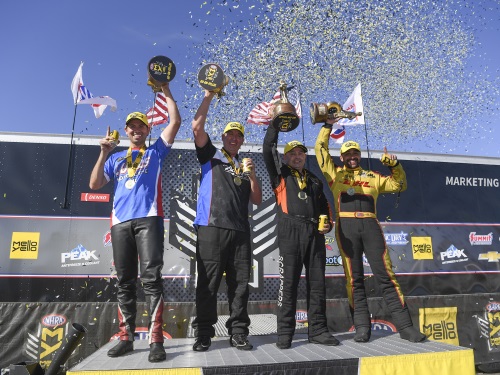 It was a thrilling moment for Salinas a year ago in Vegas, as he ousted the rest of the talented Top Fuel field to win his first career race. With the class as tight as ever and competition at an all-time high, it’s anybody’s race as everyone looks to stay hot in Vegas. Vying for the prize is an all-star list of competitors, including back-to-back world champ Steve Torrence, who won the inaugural four-wide race in Vegas, Pomona winner Doug Kalitta, fall Vegas winner Brittany Force, Antron Brown, Leah Pruett, Clay Millican, Terry McMillen, Shawn Langdon and Austin Prock.

In Funny Car, the four-wide race in Vegas has been a welcome event for Todd. The 2018 world champ has won both races at the track and will look to make it three straight event wins in 2020 as he attempts to pick up his first win in the process. It won’t be easy, as the ultra-competitive Funny Car class is loaded with competitors and side-by-side racing. Don Schumacher Racing has won the first two events thanks to victories from Tommy Johnson Jr. and Jack Beckman, while others looking to break through in 2020 include defending world champ Robert Hight, John Force, Ron Capps, Matt Hagan, Alexis DeJoria, Tim Wilkerson, Bob Tasca III and Cruz Pedregon.

Butner enjoyed his first Vegas four-wide win a year ago, contributing to a hot start that included three wins at the first four races. He’ll try to re-create some of that early-season magic in 2020, hoping to get on track after impressive showings thus far from Jeg Coughlin Jr. and reigning world champ Erica Enders. She won the most recent event in Phoenix, beating Butner in the final round, while Coughlin won the opener in Pomona. Others to watch include Greg Anderson, who has eight overall Vegas wins, Jason Line, Alex Laughlin and Deric Kramer. The NHRA is also celebrating the 50th anniversary of Pro Stock in 2020, honoring legends who will be at the event as part of the yearlong celebration in Pro Stock.

Pro Stock Motorcycle will take part in four-wide racing at Las Vegas for the second time in class history, bringing their two-wheeled excitement to the event. Andrew Hines is the defending world champ and has plenty of four-wide success on the East Coast. He’ll try to match that in Vegas, but the winningest rider in class history will be met with plenty of challenges from standouts like Matt Smith, who won the Vegas fall race last year, Eddie Krawiec, last year’s winner Arana Jr., Angelle Sampey, Jerry Savoie and Karen Stoffer.

NHRA fans can take part in the NHRA 101 walking tour to see the cars and teams hard at work in the pits. Fans can also attend the “Get To Know” session featuring the Pro Stock category and Nitro School to learn how the cars operate and reach their thrilling speeds. The Strip at Las Vegas Motor Speedway will also host a Mello Yello autograph session and allow fans to meet their favorite drivers as well as the Sealmaster Track Walk hosted by NHRA announcer Joe Castello. Another can’t-miss experience is the winner’s circle celebration on Sunday. New for 2020, the winner’s circle will be moved to the track surface, allowing fans a more intimate and up-close experience to celebrate the event winners.

As always, fans can also interact with their favorite drivers as they’re granted an exclusive pit pass to the most powerful and sensory-filled motorsports attraction on the planet. This unique opportunity gives fans direct access to the teams, allowing them to see firsthand the highly-skilled mechanics service their hot rods between rounds, and get autographs from their favorite NHRA drivers.

Fans will want to visit NHRA’s popular Nitro Alley and Manufacturers Midway as well, where sponsors and race vendors create a carnival atmosphere, with interactive displays, simulated competitions, merchandise, food and fun for the entire family.

To purchase general-admission or reserved seats, call (800) 644-4444 or visit www.LVMS.com. Kids 12 and under are free in general admission areas with a paid adult. To honor the Salute to First Responders, military and first responders can save 20 percent on general admission tickets at the gate. For more information about the NHRA visit www.NHRA.com.

WHEN: Friday through Sunday, April 3-5