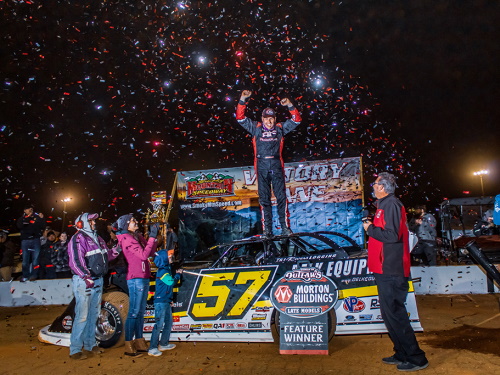 MARYVILLE, TN (March 8, 2020) – Just like on the college basketball court, Saturday night’s World of Outlaws Morton Buildings Late Model Series race featured two of the best in the sport up against each other with the pressure on the line and a big trophy awaiting the winner. By the time 60 laps around Smoky Mountain Speedway were complete, the packed grandstands had been treated to an incredible race that saw home-state hero Mike Marlar regain the lead after a late restart and bring it back to the checkered flag for his first ever Tennessee Tipoff victory.

The 2018 Series champion made the winning move on 2019 Rookie of the Year Ricky Weiss in a big slidejob for the lead with just over two laps remaining to secure the victory, Weiss settling for the runner-up spot. Josh Richards crossed in third after a climb from 10th and strong presence inside the top-five all race long.

Polesitter Chris Madden, of Gray Court, SC, led the field to the drop of the green with Brandon Sheppard and Marlar, from Winfield, TN, on his heels as he pulled away to a nice gap before suffering a reported power steering issue on lap 25, ending his night early. By then, Weiss had made his way to the runner-up position from eighth, picking off cars one at a time down low before inheriting the lead from Madden’s misfortune under the caution.

Weiss, of Headingley, MB, carried the lead for three laps after the restart until Marlar got a great run out of Turn 4 on lap 28 and drove it deep into turn one to take his first lead of the night. Much like he had been doing the whole race, Marlar posted his car up high and fed off the of the topside momentum.

“I definitely had it [set up] a little wrong for the bottom so I needed to run the middle to the outside,” Marlar said. “I felt like I was really fast, even in open track. But when I caught the traffic, I don’t know but for whatever reason, I was really loose.”

That discomfort up high in traffic for Marlar became very apparent around lap 48, when Weiss had noticeably closed the gap Marlar made for himself before hitting lapped traffic. Sticking to the low side, Weiss got a great run off of Turn 4 and beat Marlar to the stripe to regain the race lead.

“When we got to lapped traffic there, I was able to inch up on [Marlar] and was able to get by him,” Weiss said. “I knew we’d have a shot at winning it if it stayed green, but of course we got a caution with about six or seven [laps] to go.”

Weiss led for another five laps and could see the light at the end of the tunnel, until the caution came out with just six circuits remaining. Under the yellow, Marlar paced behind Weiss in his special throwback car number 57, honoring he and his father’s original racing number, and pondered about the move he knew he had to make in an attempt to steal the victory.

“I was giving it everything I had. I had pretty good confidence that I could do it, but there’s always that question mark. But I went ahead and went for it and it all worked out,” Marlar said.

Just ahead of him, Weiss was making an equally difficult decision on what to do – try switching to the high line to hinder Marlar’s momentum or stick to his guns down low.

After a bit of careful thought under yellow, Weiss made his choice to stay down low through Turns 1 and 2 in the hopes of defending the lead.

“It’s real tough, you can only look at your [crew] guys so much,” Weiss said. “The bottom was really good once we got rolling and once we got to lapped traffic because no one could run down there.

“I knew with the momentum, [Marlar’s] line was quicker. It’s just a tough decision to make whether to go up there and leave the line you just took the lead on, or you go down there and try to protect it.”

In the end, Weiss’ maneuverability down low just wasn’t enough to hold off the high-flying Marlar. Out of turn two they raced, bumper-to-bumper, Marlar with the speed into Turn 3. Marlar threw a textbook slidejob on Weiss as they entered the corner and took the lead away permanently with two laps remaining. Marlar brought it all the way back to the checkered for his eighth career World of Outlaws Feature win and first in the Tennessee Tipoff.

In retrospect, Marlar was glad it worked out that Weiss was instructed to move up a bit to protect the lead, but also knows of the downsides of crew signaling.

“When you’re running that outside and making ground on them, you’re afraid that their crew will send them up in front of you and cause a wreck,” Marlar said. “That’s something you have to be aware of when you’re racing, is the crews signaling the driver where to be… I wanted to make sure they were sending [Weiss] up and I was going down.”

Looking back on it, Weiss said he might have considered trusting the topside a bit more to defend the lead instead of sticking down low, but also noted the bottom lane’s disadvantages in the same regard.

“I knew I was really good in [Turns] 1 and 2, I could hit the brown and take off,” Weiss said. “But with 3 and 4, I’ve been here enough times to know that the momentum usually is quicker. But, when you get racing, sometimes the bottom can be quicker, so it’s really hard to judge when you’re in open air and there’s no lapped cars and you’re on the point.”

The Outlaws are back in action in just under two weeks’ time for another Southeastern doubleheader weekend – March 27th at Tennessee’s Volunteer Speedway for the Spring Thaw presented by Exel and March 28th at South Carolina’s Cherokee Speedway.

Don’t miss a moment of the action! Subscribe to DIRTVision presented by Drydene today and watch every World of Outlaws event this year with your Fast Pass! 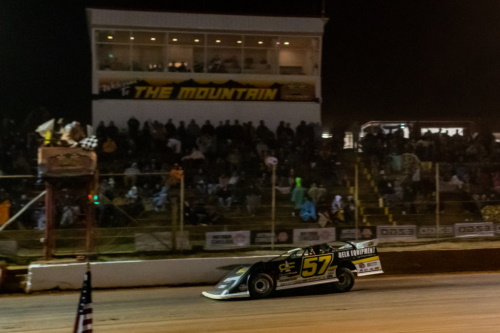