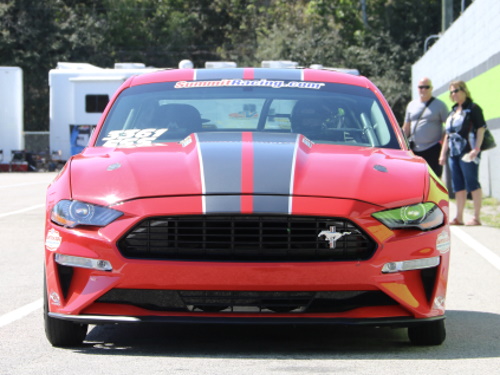 ORLANDO, Fla. (March 9, 2020) – Diverse racer Bo Butner came to Orlando with a rather long to-do list this past weekend, and he was able to check off one very important item in a head-to-head, one-and-done match with fellow Factory Stock competitor Dave Kramer.

Between elimination rounds on Sunday at the Drag Illustrated World Doorslammer Nationals presented by CTech Manufacturing, Butner and Kramer squared off in front of a jubilantly divided crowd – Butner in his Summit Racing-branded Cobra Jet Mustang, and Kramer behind the wheel of his KB Racing-powered COPO Camaro. It was Butner who took home the $25,000 prize following a very close side-by-side race in which he was first off the starting line and first to the finish.

“The people loved it,” said Butner. “There were as many people high-fiving and screaming as when I won the Pro Stock championship in Pomona in 2017. It was crazy, and it was a lot of fun to see the Ford fans and the Chevrolet fans so excited leading up to it.”

The match was initially a wager between the two drivers that was supposed to be a best-of-three, but both drivers agreed to a one-and-done to the eighth-mile when circumstances shifted and time dwindled.

Leading up to their match, Butner and his team worked to get the Cobra Jet in line for the start of the SAMTech.edu Factory Stock Showdown at next week’s NHRA Gatornationals. Unfortunately, they encountered a string of challenges that prevented them from making a full pass. Even so, Butner and Kramer agreed to run for the money, as promised.

“I knew it would be a big gamble for me because we hadn’t made a hit before that, but we made changes to my car, and I felt confident,” Butner explained. “Things went our way. I know for a fact that we were both 100% NHRA legal – I trust him, he trusts me – and it made me feel good that we both went out there, we both got off the starting line, and it was a good race. I’m very excited for Gainesville now.”

The Summit Racing Cobra Jet will be ready, but it won’t be Butner behind the wheel – Jack Hodge will be making his debut in the SAMTech.edu Factory Stock Showdown racing Butner’s Mustang.

“Jack will be here to test all day Monday, and then he’ll race the Cobra Jet this week in Gainesville,” said Butner. “I’ll be there helping him to tune it, and not exactly ‘coaching’ him, but I’ll let him know what I know. I’m very happy with the car; he’s got a good shot.”

Hodge is joining Butner to form a two-car team for the 2020 Factory Stock Showdown. He will race a Ford Mustang identically built and prepared to Butner’s Summit Racing Cobra Jet, but it is a brand new car that won’t be ready until just after Gainesville.

“It’s a twin of mine; everything is the same,” said Butner. “We just came up a little short on getting the wiring finished on time, but it’ll be ready when we get home from Gainesville. Then we’ll take it, I’ll go test it, and then Jack will fly in to test. From there on, we’ll have two cars – and those two cars are going to be tough to beat.”