ORLANDO, FL (March 9, 2020) – Greg Anderson simply loves a good drag race. The four-time NHRA Pro Stock world champ thrives under pressure, and at the Drag Illustrated World Doorslammer Nationals presented by CTech Manufacturing, the driver of the red Summit Racing Chevrolet Camaro was in proper form over the course of a most enjoyable weekend that culminated in his first final-round appearance of the season.

“I had a good weekend; this was really a good time,” said Anderson, who missed the final win light by just a smidge in a close race with Jeg Coughlin. “We’ve made a lot of progress since the first two races of the year. We had a disappointing start in Pomona and Phoenix, but this weekend we definitely made up a lot of ground.”

The KB Racing team had all of the right parts and pieces in place at Orlando Speed World Dragway, and Anderson’s Summit Racing Chevy was at the top of the sheet on Friday with a 6.474-second pass. On Saturday, he bettered his time with a cool 6.470 and came into raceday with a ton of power that was communicating effectively with the pristine racing surface. 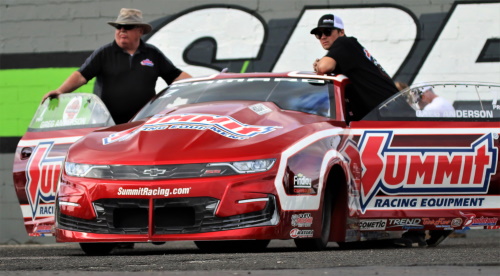 Anderson drew Pro Stock rookie Kyle Koretsky for the first round, and although his opponent was off the starting line first and made a tremendous run in his KB Racing-powered Nitro Fish Chevrolet Camaro, it was class veteran Anderson with the win light, 6.513 at 209.26 mph to 6.528, 211.30.

The final round put the spotlight on one of the greatest Pro Stock rivalries in recent times, with the two mail-order automotive parts house giants squaring off for the $75,000 payout.

“I had a blast with this race,” said Anderson, who has a history of success at bonus events, including a record seven K&N Horsepower Challenge victories. “This reminds me of the K&N shootout, and I love that race. This brings you back in time to where it all started. Ken Black started this team to go race and have fun, and that’s what we did this week. I loved it, and my hat is off to Drag Illustrated and [promotors] Wes Buck and Richard Freeman. They all did a great job, and it was just so good for Pro Stock. I hope the fans enjoyed it as much as all of the Pro Stock racers did.”