SONOMA, Calif. (Aug. 1, 2015) – The field is set at the 28th annual NHRA Sonoma Nationals, and Tommy Johnson Jr. and the Terry Chandler-funded Make-A-Wish Funny Car team are gearing up for a first-round match with Tim Wilkerson. Johnson, driving the Don Schumacher Racing Make-A-Wish Dodge Charger, has raced Wilkerson twice so far in the 2015 rendition of NHRA’s Mello Yello Drag Racing Series, and they are currently split with one win each.

In the first round of qualifying on Friday, Johnson clocked a 4.087-second pass at 310.20 mph, and as the sun set at Sonoma Raceway and the cool ocean breeze lowered the temperature, conditions were ripe. Johnson flew down the racetrack in his John Collins-tuned Make-A-Wish Dodge Charger R/T and tripped the timer at the finish line to the tune of a 4.031, 317.05.

The time was quick, but the session was one for the record books at no less than seven Funny Cars broke into the 3-second zone.

“John [Collins, crew chief] was by far more frustrated that we weren’t one of the cars to go in the 3s, but I’m still plenty happy with the performance of our Make-A-Wish Dodge,” said Johnson, who ran the first sub 4-second pass in Chicago last season. “A 4.03 is nothing to sneeze at, but John knows what we’re capable of, and he’s frustrated that we haven’t been able to get the set-up right to get back in the close. We’ve been close, but we’ve just missed it a few times. We’re still learning it, and it’s just a matter of time before we get back there.”

“We would rather have made a really good run on Friday night, but in the big picture, we aren’t going to race in those conditions on Sunday,” said Johnson. “We wanted to get a good, solid run in conditions that we’ll race in tomorrow, and we did that today. We’ll be very competitive tomorrow. Tim [Wilkerson] is as tough as they come, and it won’t be an easy first-round matchup, but there aren’t many of those anyway. We’ll go up there with a solid car, and I’m sure we’ll run well.”

At each NHRA Mello Yello Drag Racing Series event, the Make-A-Wish team and Don Schumacher Racing host Wish Kids and their families in the hospitality area. The children get to meet Johnson as well as Chandler, who fully funds the Make-A-Wish team out of her own pocket. 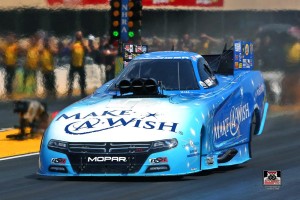 “This weekend at Sonoma Raceway we had one of the largest turnouts we’ve had in quite awhile,” said Johnson. “There were nine Wish Kids here today, and none of them had ever been to a drag race, so it was a really neat experience for us to share this with them. One little girl today really fell in love with racing, and she even asked me if she could drive our Make-A-Wish Dodge in the last qualifying run. It’s great to spend this time with the kids, and I’d love nothing more than to put their Make-A-Wish car in the winner’s circle tomorrow.”

ABOUT MAKE-A-WISH
Make-A-Wish® grants the wishes of children with life-threatening medical conditions to enrich the human experience with hope, strength and joy. According to a 2011 U.S. study of wish impact, most health professionals surveyed believe a wish-come-true can have positive impacts on the health of children. Kids say wishes give them renewed strength to fight their illnesses, and their parents say these experiences help strengthen the entire family. Based in Phoenix, Make-A-Wish is one of the world’s leading children’s charities, serving children in every community in the United States and its territories. With the help of generous donors and more than 27,000 volunteers, Make-A-Wish grants a wish somewhere in the country every 37 minutes. It has granted more than 254,000 wishes since its inception in 1980; more than 14,200 in 2014 alone. Visit Make-A-Wish at wish.org to learn more.