Beckman won the iconic race at Gainesville Raceway for the first time in 2018, and he’ll have a great opportunity to do it again this year. He’s been red-hot in his 11,000-horsepower Infinite Hero Foundation Dodge Charger SRT, winning the opening race in Pomona and following it with a runner-up in Phoenix. While it doesn’t automatically predict future success, Beckman does note the huge boost his team has received.

“It’s an awesome feeling, and every team and every driver aspires to be in that position,” Beckman said. “When you’ve got a great hotrod, you drive better, and when you go more rounds, you get more data. You’re going to learn more about your car under race conditions. When someone hands you a trophy, you’ve earned it in this class. It’s that satisfaction that with all that work you and your team have put in, there’s a payoff. And once you taste victory, nobody minds working a little harder.”

Beckman’s early-season success is just a continuation of a strong finish to close out 2019. He finished second overall behind reigning world champ Robert Hight, winning twice in the Mello Yello Countdown to the Championship and advancing to three finals. That momentum has continued this year, qualifying second in Pomona en route to a commanding performance and grinding his way to the finals in Phoenix.

“This year has just been a continuation of last year,” said Beckman, who has 31 career wins. “A lot of times you take the car back in the off-season, take it apart and for whatever reason it doesn’t have the same magic. But we’ve had that and I was confident we could do well at the Winternationals. While we thoroughly earned that trophy, Phoenix was equally important. Even though we weren’t at our best, we showed we could still get wins and that’s big.”

It’s proven Beckman and his team, led by crew chiefs John Medlen and Dean Antonelli, can win in any way possible. That will be crucial as the points leader heads to Gainesville, looking to repeat his 2018 victory. To do that, he’ll have to get past the likes of Hight, Phoenix winner and Don Schumacher Racing teammate Tommy Johnson Jr., Ron Capps, Matt Hagan, John Force, Alexis DeJoria, Bob Tasca III, Tim Wilkerson, Cruz Pedregon and 2018 world champ J.R. Todd, but Beckman, knowing the history of the prestigious race, promises to be locked in.

“The longer a race has been on the NHRA tour, the more history and great moments it’s going to have, and it’s no secret I’m a historian of the sport,” Beckman said. “Gainesville and the Winternationals are so similar because they’re both he season-openers for that part of the United States. There’s big gaps on both sides of the schedule for Gainesville, so you want to do well. It’s such a special race and, afterwards, you want to be able to ruminate that you were able to close the deal in Gainesville.” 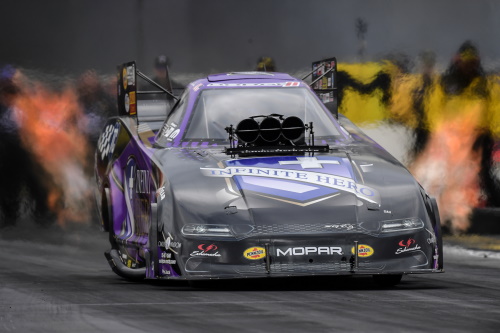 Butner claimed his first Gatornationals win in Pro Stock a year ago, but 2020 has belonged to rival team Elite Motorsports thus far. Jeg Coughlin Jr. won the opener, while reigning world champ Erica Enders grabbed the victory in Phoenix. The NHRA is also celebrating the 50th anniversary of Pro Stock in 2020, Class legends Larry Morgan and Tony Christian will be honored during the race.