Force, who finished runner-up at the season-opening Winternationals, continued to impress behind the wheel of his ‘Ole Blue’ Chevy Camaro at the recent NHRA Arizona Nationals at Wild Horse Pass Motorsports Park. The 152-time winner rocketed to the No. 2 qualifier spot and brought the same energy into race day. In the first round of eliminations, Force laid down low ET and top speed of the event with a stout 3.848-second pass at 335.90 mph. His consistency showed through the next two rounds and although he came up short to rival Jack Beckman in the semifinal, he left Wild Horse Pass third in the Mello Yello points standings by only two points.

“We didn’t get the win, but Phoenix was a good weekend for the BlueDEF Chevy team. I have a good race car and we’ll get BlueDEF, Chevy and all our sponsors in the winner’s circle soon,” Force said. “It’s early and the season is just getting started but my son-in-law Danny Hood, Ronnie Thompson and Tim Fabrisi and the young guys on my team are working hard so we’ll be there soon.”

The Hall of Fame team owner and driver makes his way to historic Gainesville Raceway with success on his side. Force has 13 final round appearances with eight victories at the facility and has started race day from the top spot seven times. At last year’s Gatornationals Force raced to a semifinal finish.

“I always like getting to Gainesville. It’s the first race on the east coast and it’s always a big show. The locals, the fans, it’s just an unbelievable event every year,” Force said. “This BlueDEF team is ready to get there and I’m ready to get back in the car. I’ve won at Gainesville before, I’ve crashed there, lots of good and not so good memories but I’m hoping we get to the final and get a win this weekend.”

John and daughter, Brittany Force and fellow Funny Car teammate Robert Hight will be at Gainesville Buick GMC on Friday, March 13 from 9:30-10:30 a.m. at 2101 N Main Street, Gainesville, Fla. 32609 for a special meet-and-greet and autograph session with the fans. 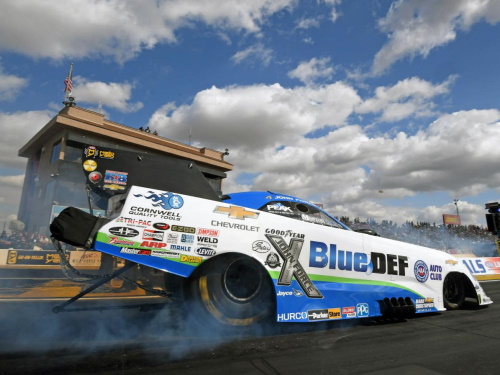