For the 2019 Auto Club Road to the Future award winner, the 2020 season has been off to a promising start. At preseason testing, Prock laid down a stout 3.682-second pass at 333.08 mph in his Montana Brand / Rocky Mountain Twist dragster that carried over into the season-opening Winternationals. There he raced to a career-best elapsed time of 3.678-seconds, secured the No. 2 qualifying spot, his best qualifying effort, and finished runner-up for the first time to be second in the Mello Yello points standings. Following the recent NHRA Arizona Nationals where Prock and the Montana Brand team finished race day early in the first round, the Mike Green and Joe Barlam led team took advantage to test Monday where where they made four passes down track and picked up new data that the team is confident about.

“This Montana Brand / Rocky Mountain Twist team had a tough weekend in Phoenix. We had a few gremlins, so we stayed and tested at Wild Horse Pass, and learned a lot. I think we’ll be ok at this next one and will be well on our way to having a great season,” said Prock who is only 22 points behind his previous No. 2 spot in points standings. “Mike Green, Joe Barlam and my team have been working really hard and we feel like we can show up and go some rounds and win in Gainesville.”

Heading to historic Gainesville Raceway where he attended Frank Hawley’s drag racing school and was licensed in an Alcohol Funny Car and Nostalgia Funny Car, Prock is looking for his first win at the facility and second in his NHRA Mello Yello drag racing career.

“I’m very excited for Gainesville. I would love to get a win down there for Eric Medlen and we’re really looking forward to redeeming ourselves from Phoenix,” said Prock referencing former John Force Racing Funny Car driver, Eric Medlen who passed away from injuries at a testing accident at Gainesville Raceway. “This car is putting up the numbers it needs to, and we just need to get back the momentum we had at the start of the season. We’re heading in the right direction, and I can’t wait to see this Montana Brand / Rocky Mountain Twist team back in the winner’s circle.” 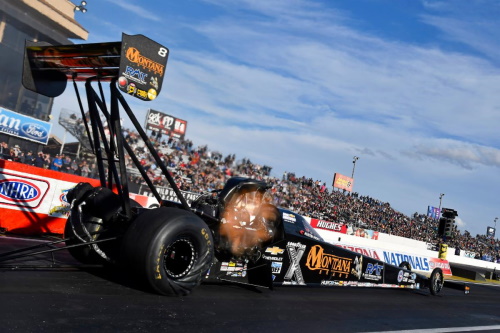