GAINESVILLE, Fla. (March 11, 2020) – There was technically an off-season for the NHRA Mello Yello Drag Racing Series between the 2019 and 2020 seasons, but it hasn’t looked like Jeg Coughlin Jr. has skipped a beat in the new year. After ending last season on a positive note, Coughlin has continued that momentum heading into this weekend’s 51st annual AMALIE Motor Oil NHRA Gatornationals at Gainesville Raceway.

He has qualified No. 1 in four of the past five races, dating back to last year, advancing to four finals and winning two races, including the final race of 2019 and the first race of 2020. After announcing the “Breaking Barriers” retirement tour as Coughlin steps away from full-time Pro Stock racing following the 2020 season, Coughlin has been rolling in his JEGS.com/Elite Motorsports Chevrolet to start the year. That includes the NHRA Winternationals win and a $75,000 shootout victory in Orlando during the off-week before Gainesville, leaving Coughlin on track for another big weekend.

“We had a hell of a Countdown in ’19, and missed the championship by just over one round of competition,” Coughlin said. “That’s nothing to dwell on. What’s exciting is we were in a lot of final rounds, we won the World Finals in Pomona, slept well and hibernated for the winter and came out and won the Winternationals. We had a little mishap in Phoenix, but we rebounded well (in Orlando). We’ll try to keep on rolling.”

Richie Crampton (Top Fuel), Robert Hight (Funny Car), Bo Butner (Pro Stock) and Andrew Hines (Pro Stock Motorcycle) are defending winners of an event that will be televised on FOX Sports 1 (FS1), including finals coverage on Sunday, March 15 at 9:30 p.m. (ET). It is the third of 18 races during the 2020 NHRA Pro Stock season, which is also celebrating its 50th season this year. Class legends Larry Morgan and Tony Christian will be honored during the race, while Coughlin, an active legend in the sport, will try to earn his third career Pro Stock win in Gainesville.

A number of class legends and standouts will also try to keep that from happening, including teammate and reigning world champ Erica Enders, four-time world champ Greg Anderson, Jason Line, a three-time champ who is retiring at the end of the year as well, Alex Laughlin, Kenny Delco, Val Smeland, Butner and Chris McGaha. But not many have looked as impressive as Coughlin this year, which he attributes to a talented Elite Motorsports team and his crew chief, Rickie Jones.

“We’ve been clicking really well as a team,” said Coughlin, who has 64 career Pro Stock wins. “The mindset has been very aggressive and it’s working. We’re doing everything we can as a group to win races. That same game plan is in place for this weekend. We want to be the last team standing come Sunday afternoon.”

Doing so in his final season of full-time Pro Stock racing would be extra meaningful for Coughlin, who has enjoyed success at all of NHRA’s biggest races. That includes the Gatornationals, which has always been seen as a prestigious race, and Coughlin will aim to go out a winner. He and Enders have split the first two races on the NHRA tour in 2020, but Coughlin knows this type of run won’t last forever. The key is ensuring to make the most out of the opportunities when they arise.

“We’re set for a big weekend,” Coughlin said. “The Gatornationals are always a special race, the first time the NHRA tour gets to the East Coast each year, and we’re coming in on a great run. It’s been a stellar start to the season for our JEGS.com/Elite Motorsports Chevrolet Camaro and the Elite team in general. The wins are already stacking up.” 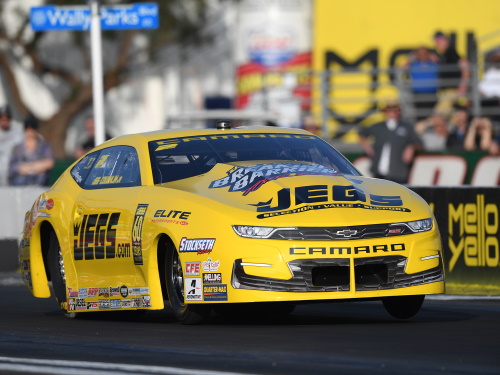