(March 12, 2020) – After conversations with Circuit Ricardo Tormo and the local government, the NASCAR Whelen Euro Series season opener in Valencia, Spain has been rescheduled due to the ongoing concerns regarding the spread of COVID-19 (coronavirus). The NASCAR GP Spain at Valencia, previously scheduled for April 25-26, will now take place on October 31st – November 1st.

All other events are scheduled to proceed as planned. The 2020 NASCAR Whelen Euro Series season will begin with the June 6-7 NASCAR GP UK at Brands Hatch.

By serving as the final event of the season, the NASCAR GP Spain will become a playoff event and award double points. The American Festival of Rome at Vallelunga, Italy will be the closing round of the regular season and award standard points.

The NASCAR Whelen Euro Series will continue to monitor the global situation and provide timely updates if necessary. 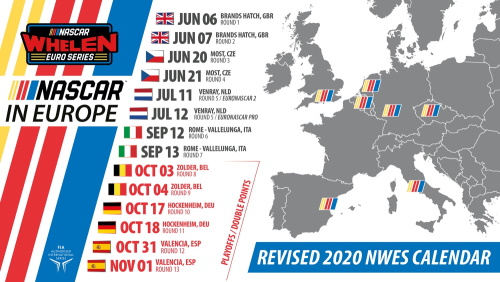