GAINESVILLE, Fla. (March 12, 2020) – Andrew Hines put together one of the most impressive seasons in Pro Stock Motorcycle history last season, and certainly enjoyed the best year in his remarkable career. In a year where nearly everything went right, Hines won half the races in the class, rolling to his sixth NHRA Mello Yello Drag Racing Series world title.

With the 2020 Pro Stock Motorcycle season set to open at this weekend’s 51st annual AMALIE Motor Oil NHRA Gatornationals at Gainesville Raceway, Hines is solely focused on this year and not trying to top his banner campaign. The way Hines tells it, he’s not attempting to raise the bar, in part because what he did a year ago on his Screamin’ Eagle Vance & Hines Harley-Davidson would be nearly impossible to exceed. But racing for another championship certainly isn’t out of the question.

“There’s no way you can top last year,” Hines said. “It’s just not going to happen. Now, you just try to continue that success and put on a show for all the Harley fans. Being around this sport nearly my entire life, I’ve seen the trials and tribulations that can happen, and you can never expect to have a year like that. It was just a phenomenal year, but this is a new year and you just have to focus on that.”

Richie Crampton (Top Fuel), Robert Hight (Funny Car), Bo Butner (Pro Stock) and Hines (Pro Stock Motorcycle) are defending winners of an event that will be televised on FOX Sports 1 (FS1), including finals coverage on Sunday, March 15 at 9:30 p.m. (ET). It is the first of 16 races during the 2020 Pro Stock Motorcycle season and Hines feels confident coming off another productive off-season.

That comes on the heels of winning eight races and advancing to 10 final rounds, winning seven of the 10 races in the regular season. It was a completely dominant performance for Hines, who is the winningest rider in the class on the strength of 56 career victories. Reaching 100 career final rounds is well within reach for Hines, who has 96 finals appearances, and staying motivated has never been a problem, either.

“We’ve done a lot of work,” Hines said. “We built a new bike for (teammate) Angelle (Sampey), and we’ve got a new jet-fire orange color this year as a throwback to a 1970s orange that Harley-Davidson used to have, which is pretty cool. We also found some time to make some more horsepower, so we’re looking forward to Gainesville. It’s always nice to try to set the tone for the season there. I’ve had decent success and you want to do well, but we know it’s going to be a challenge.”

The new look will undoubtedly be an eye-catcher in Gainesville, where Hines will try to grab his second straight victory at the iconic facility and his third overall. Hines’ teammate, Eddie Krawiec, won the previous three years at the Gatornationals and has six career wins at the opener, while a talented field of 20-plus riders in Gainesville will also include the likes of Matt and Angie Smith, Hector Arana Jr., Jerry Savoie, Steve Johnson, Karen Stoffer, Ryan Oehler and Scotty Pollacheck. With talent at every turn, Hines knows there will be plenty of challenges in 2020.

“It’s nice to get going, get back on the bike and try to have a good season,” Hines said. “As far as the competition in the class, everyone has gotten better and it’s going to be one of the toughest years as far as the level of competition. Everyone’s bringing their ‘A’ game and if you have fields in the low 20s (as far as participants), that drives more passion to the sport, and it’s better for the sport and the class.” 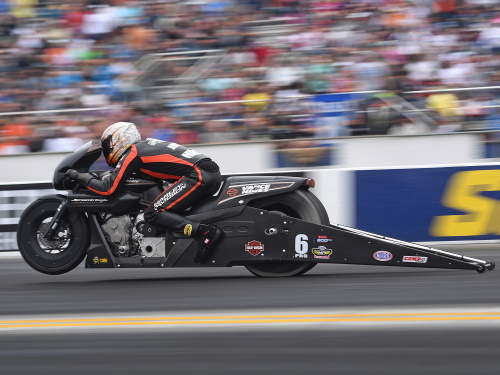 Hight used his fourth win at the legendary facility as momentum for his third world title in Funny Car. He’ll face off in the loaded class against Pomona winner Jack Beckman, Tommy Johnson Jr., who won in Phoenix, John Force, J.R. Todd and Ron Capps.