GLENDORA, Calif. (March 26, 2020) – NHRA, like much of the world, is currently on hold due to the global COVID-19 pandemic, but NHRA is delivering its fans some racing action thanks to live social media platforms.

On Friday, March 27 from 6-9 p.m. EDT NHRA will launch its first episode of NHRA Rewind Live on NHRA.com, NHRA.tv, NHRA’s Facebook and YouTube channel. Fans can join the NHRA on FOX broadcast team as they view the 2019 Seattle event and recall all the exciting racing action from one of the most memorable events in NHRA history.

That event, many will remember, was one for the record books as NHRA legend John Force won his 150th Funny Car title – a feat that will likely never be reached again.

Fans can join NHRA on FOX lead announcer Brian Lohnes and the two-time Funny Car world champion, analyst and color commentator Tony Pedregon as they recall the race, revealing their insider insights for the first time. Fans can also comment on the live feed to ask Lohnes and Pedregon questions about the event and discuss behind the scenes details. 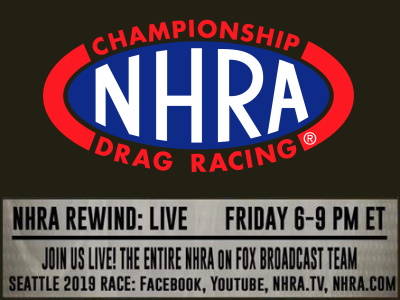