2020 NWES SEASON
A record 33 full-time entries for the 2020 NASCAR Whelen Euro Series
The strongest field in the history of NASCAR racing in Europe! 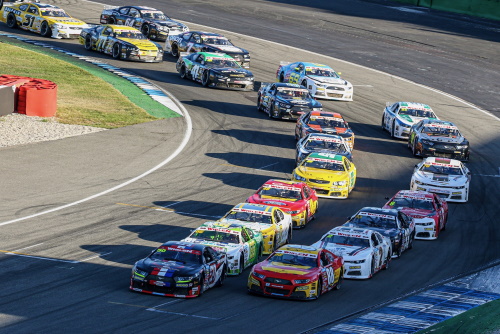 (March 27, 2020) – In these challenging times, the entire NWES community relay the #StayHome message and encourage everybody to be smart and safe. When it will be time to return racing, the NASCAR Whelen Euro Series will hit the track with a record number of 33 full-time entries, fielded by 17 teams for the 2020 NWES season.

Champion team Hendriks Motorsport will expand to put three cars in the entry list, while EuroNASCAR 2 title winning squad DF1 Racing will field four Chevrolet Camaros. A fifth car will be entered by the Austrians in cooperation with Marko Stipp Motorsport. CAAL Racing and Jacques Villeneuve’s Feed Vict Racing will have four V8 beasts each ready for the upcoming season. The Italian powerhouse also reached a technical partnership with Solaris Motorsport, which will return with their Camaro. There are several two-car teams confirmed for the 2020 NWES season: Alex Caffi Motorsport, RDV Competition, PK Carsport, 42 Racing and Braxx Racing. Memphis Racing, Mishumotors, Marko Stipp Motorsport, Team Bleekemolen and newcomer TC Motorsports will field one full-time entry each.

As proven by the many drivers already announced during the offseason, the competition level will be the highest in NWES history, with an unprecedented number of drivers capable of winning. The battle for titles and trophies will be more intense than ever before.

Roy Hendriks (Hendriks Motorsport): “The competition will be outstanding and there have been several big names already announced. I think it will be harder in 2020 than it was last year. Beside ours there are a lot of good drivers joining the other teams. The cars are ready to race and also the whole team and all drivers want to get back to the track as soon as possible. But we fully understand that it’s not responsible to go racing during this crisis. We make the best out of it, as we have more time to think about strategies and setups right now.”

Norbert Walchhofer (DF1 Racing): “I really think the upcoming season will be the strongest one in the history of NWES. Our drivers are well prepared and we’re looking positively to the 2020 season despite these difficult times. We are looking forward to hitting the track again soon and continuing our winning streak from 2019.”

Jacques Villeneuve (Feed Vict Racing): “It’s great to see so many entries because it shows that there’s a lot of interest in the series. There are also many important names joining. The races are exciting, the cars are fun to drive, the tracks are great and the drivers are hungry for pure racing. There’s a place for everyone, from 16 to 70 years old. We all can’t wait to go back racing, but now it’s the time to be smart and focus on going through this difficult moment, hoping to return to the track soon.”

Luca Canneori (CAAL Racing): “We worked hard during the winter, preparing our cars and completing several test days. We are ready for a season with no equals as far as competition on track. Having so many strong competitors is positive for the whole sport. We are of course looking forward to going back racing soon and giving the fans some unique NASCAR races.”

Anthony Kumpen (PK Carsport): “We’ve already won our first race in 2020 with our new driver Alon Day piloting the #24 Monster Energy car at virtual Watkins Glen. I watched the sim race and it was nice! To have such a big grid for the 2020 NWES season is good news. Since joining the series in 2014 I always said that EuroNASCAR is one of the fastest growing series in Europe and it is becoming really strong. It’s a special mix of experienced and young drivers, surrounded by great crowds at the tracks, a special atmosphere. It’s great to be part of the series for a team like us.”

Franck Violas (RDV Competition): “We started racing in NWES ten years ago and year after year the level kept rising. It’s amazing to have so many teams and drivers with the potential to win a race. It’s not like in other series where the same drivers and teams end up on the podium. We had a tough 2019 season but I think we will look way better in the 2020 championship. To have 33 full time entries already is great for us as we can prove ourselves in this tight and high-level competition. We work very hard to be successful again.”

Jerry De Weerdt (Braxx Racing): “I’m really looking forward to the upcoming season as we worked hard during the winter to put everything in place. We are still working on filling a third car with good drivers. I think we already have a strong line-up for the series. Marc Goossens will join us again and he’s always good for podiums and wins. We also have young drivers in our rows who have the potential to bring home some good results in 2020.” 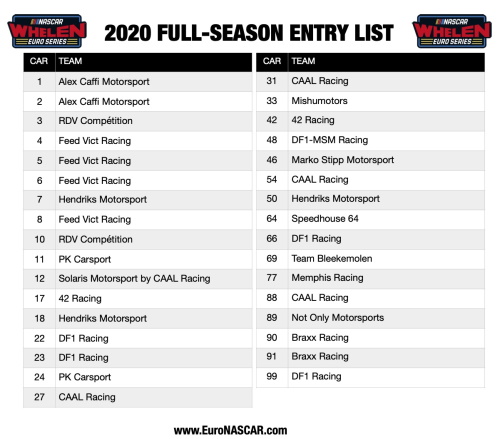