SONOMA, Calif. (Aug. 1, 2015) – Qualifying for the 28th annual NHRA Sonoma Nationals completed under sunny skies and in warm temperatures at beautiful Sonoma Raceway, and the Gray Motorsports NHRA Pro Stock team found themselves on opposite sides of the ladder and with well-tuned Chevrolet Camaros prepared to take on the competition as they make a charge towards the title.
A Sonoma title has yet to belong to the Gray Motorsports Pro Stock team, but for brothers and teammates Shane Gray and Jonathan Gray, tomorrow could very well be the day. They both have reliable racecars that have instilled a certain level of confidence.

Shane Gray Fastest on the Property 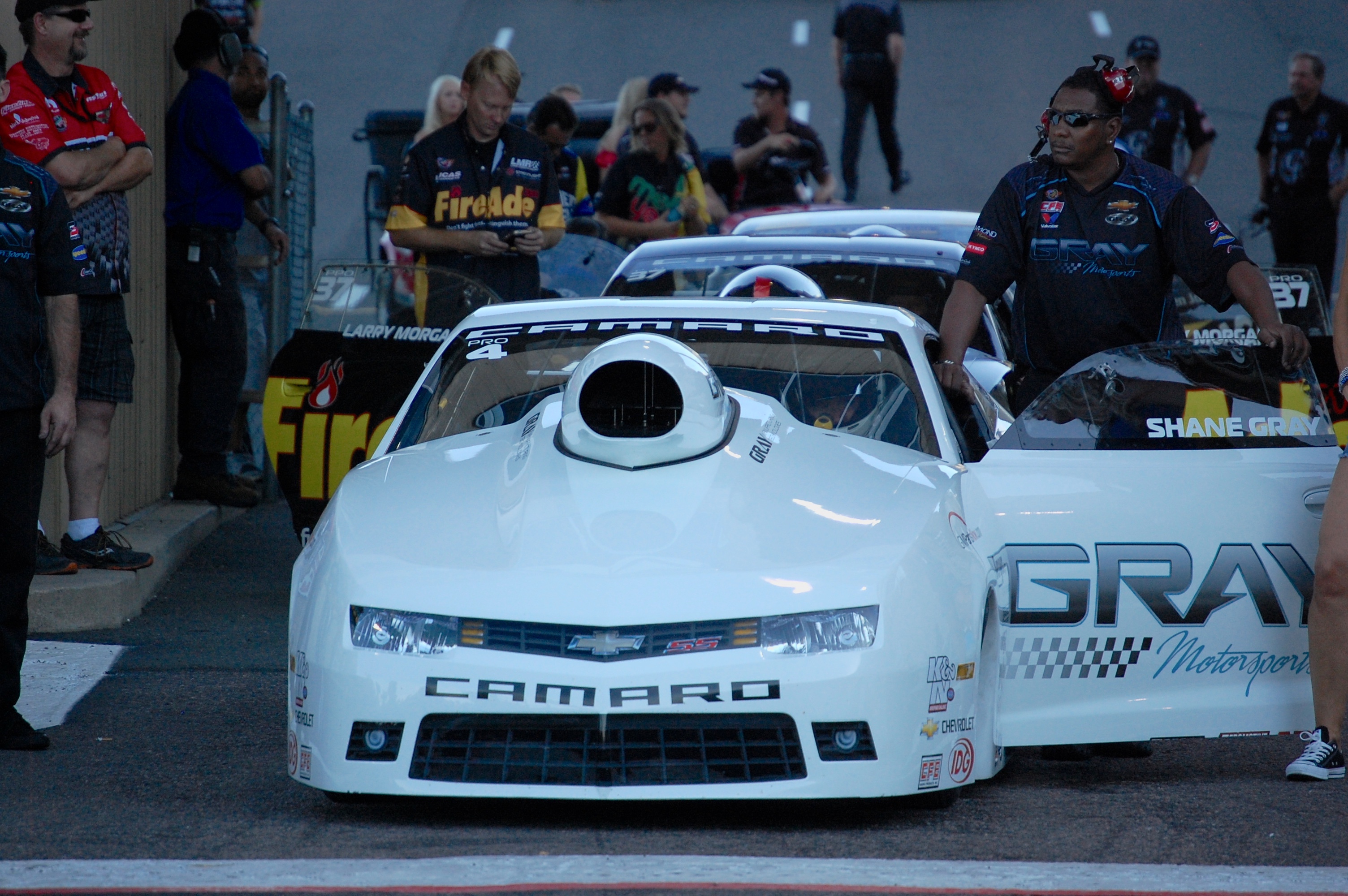 There is no denying that Shane Gray’s Gray Motorsports Chevrolet Camaro has tons of potential, and on Saturday in Sonoma, Shane powered to a 213 mph pass that was the fastest of all the Pro Stockers throughout qualifying.
In the first round of qualifying, the Denver, N.C.-based driver clocked a 6.533-second pass at 212.09 mph that set him up in the No. 5 position. Unfortunately, he was unable to take advantage of the late session on Friday and the most optimum conditions as the sun set. Just as he was about to fire up the Gray Motorsports Camaro, the battery died and he was pushed back.
On Saturday, Shane came back with a 6.560 and lowered the boom with a sturdy and stunning 213.00 mph for Gray Motorsports. He rounded out qualifying on a 6.536, 212.29 and will start from the No. 8 position. His first-round opponent will be Erica Enders, a driver he has raced twice this season and is ready to turn the tables on.
“I think we are starting to get a better handle on our Gray Motorsports Chevrolet Camaro,” said Shane. “Jim [Yates, consultant] and Justin [Elkes, crew chief] are doing a good job with it, and this team seems to get better every run. Today we were just getting ready for raceday. We went down the racetrack with what we’re going to roll for raceday tomorrow, and I feel confident. I’m actually looking forward to tomorrow because I think we have a chance. You know, you’re always starving for your next win. But racing is kind of like going by an ice cream shop when you’re a kid. You want all of it – the No. 1 qualifier, the fastest car, the win. Some days you get to have some of it, and some days you get all of it. But there are days you just don’t get any. Hopefully, tomorrow we’ll get what we came here for. I’m just going to jump up there tomorrow, let her fly, and see what we can do.” 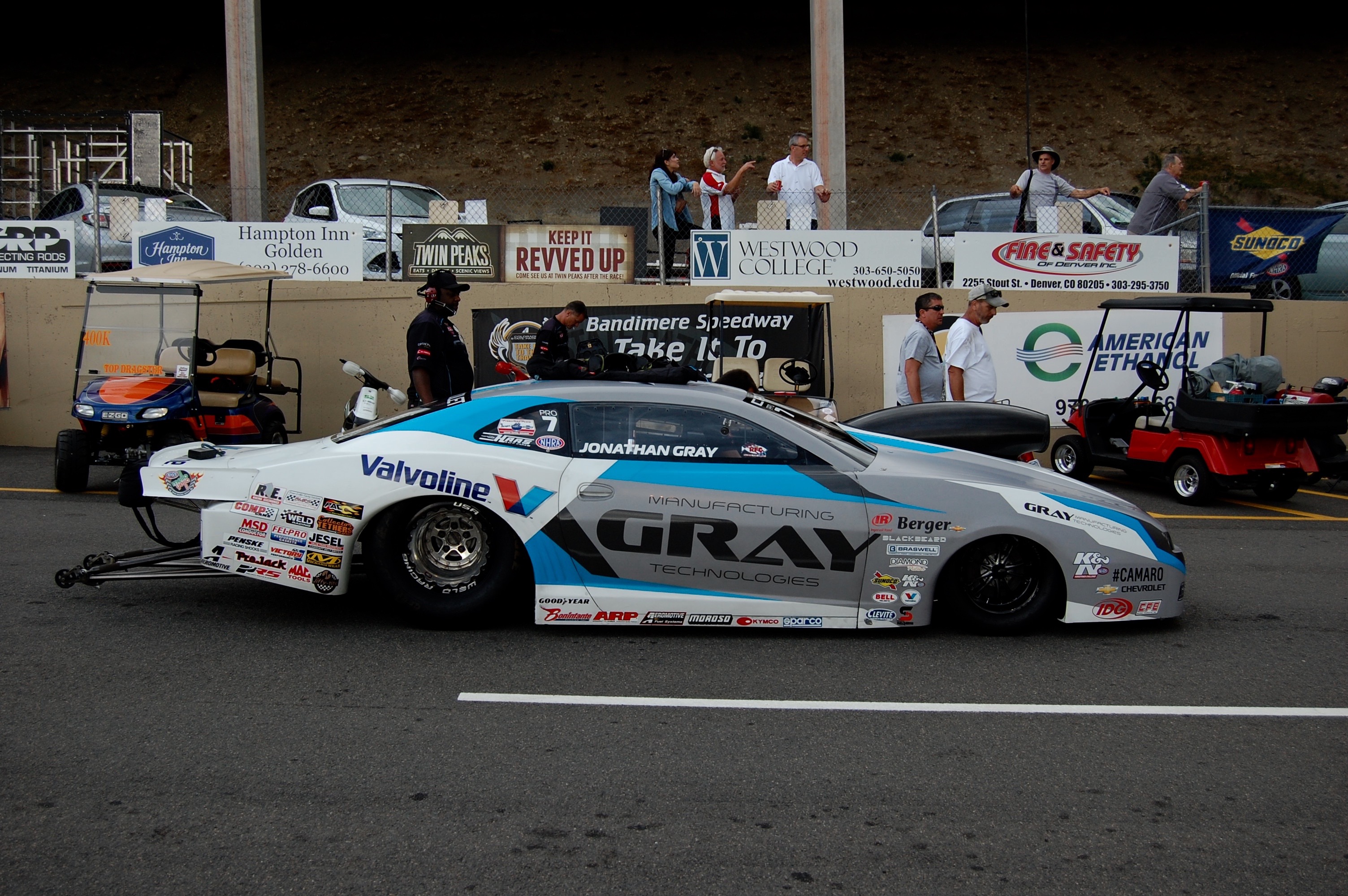 Jonathan Gray performed well during qualifying at the NHRA Sonoma Nationals. The driver of the Gray Manufacturing Chevrolet Camaro has been at the helm of a rejuvenated racecar in recent races, and ultimately he qualified in the No. 6 position in Sonoma after a quick recovery from a bit of a shaky start.
In the first session, Jonathan was 6.561-seconds at the finish line stripe with a 211.06 mph – it was good, but only worthy of the No. 9 spot. He rebounded quickly though, returning in the second session to clock a 6.527, 211.76 that moved him up to the No. 5 position.
Saturday, in warmer conditions and with the sun on the racetrack, he recorded a 6.536 at a solid 212.29 mph, and his final qualifying pass was a 6.568, 210.64.
“We made a decent run this morning, and I have a good racecar,” said Jonathan, simply. “Our Gray Manufacturing Chevrolet Camaro is consistent and reliable heading into Sunday. Lane choice doesn’t really seem to be a factor here, but we do have it for first round and that’s always a good thing. Coming into today, we wanted to try to go up there and make a nice run, and we did okay. We didn’t really change anything for the fourth session, but we kind of worked on the car a little bit. We didn’t quite go far enough in the right direction, but we can see what happened and what we need to do. We just had too much wheel speed, so we’ll make the adjustments and go from there. The biggest challenge for me here seems to be the tree [NHRA’s timing system at the starting line]. I’ve been struggling with it because it feels like it just takes so long for the tree to come down here, but we’ll deal with that challenge and see how we do. I think we have a good chance for Sunday.”

About Gray Motorsports
Gray Motorsports was launched by Motorsports veteran and seven-time NHRA Funny Car winner Johnny Gray. In 2009, Johnny opened a fully equipped race shop with the mission of developing a top of the line in-house engine program capable of winning NHRA Pro Stock world championships.
Gray Motorsports is enriched with a powerful group of veteran engine builders, tuners, and personnel, as well as an exceptional roster of drivers and a stable of fast Chevrolet Camaros. The team has accumulated four Pro Stock national event wins with driver Shane Gray at the wheel of a Jerry Haas-built Chevy Camaro, including a victory earned in 2014 at the prestigious U.S. Nationals in Indianapolis in an all-Gray Motorsports final-round battle. Shane’s brother, Jonathan Gray, licensed in a Pro Stock car early in 2014 and made his professional debut at the Gatornationals in Gainesville. Jonathan made a strong case for rookie of the year as he visited two final rounds before securing the first national event title of his still young career at the NHRA Carolina Nationals.
In all, Gray Motorsports won five races in 2014, and the dedicated and ambitious team is tackling the 2015 season of NHRA’s Mello Yello Drag Racing Series with their collective vision set on procuring their first NHRA Pro Stock world title.