“As I think back on those three events, that was actually pretty crazy,” said Coughlin, who will pullback from full-time racing at the end of the year. “At the time, the competitor in you comes out and the way they set it up was NASCAR versus NHRA so we just kind of dove into the fight. It probably was a bit insane but it was also a lot of fun.

“You’re in these things with no roll cage, no safety belts and no brakes really, except for one the brakeman uses after the run is over. It’s all about gravity and once they release you in that tube, you’re fully committed. The sled and its occupants are going to the bottom of the mountain. How you get there is up to you. If you crash and turn it over, you’re still going all the way down, just on your head, and that happened.” 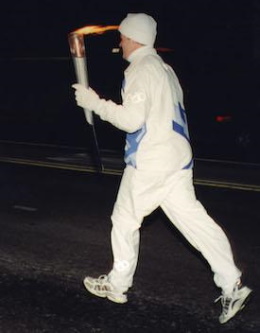 Coughlin got involved in the charity event after hearing the story of former NASCAR driver Geoff Bodine, who had learned of the struggles of the United States bobsled team in the 1990s. Bodine discovered the American athletes were far behind countries like Germany and Russia because they were using old, second- and third-hand bobsleds from their European counterparts.

Thinking the technology in the USA was equal to or even superior to most other countries, Bodine put a group together and started building bobsleds at his racecar shop. Almost immediately, the fortunes of the Americans soared and by 2002, the team collected its first Olympic medals since 1956. The Bo-Dyn Project took off from there.

“Geoff put quite the effort together to help our athletes and it was great to see the success they had attained after his involvement,” said Coughlin, who was a torchbearer for the 2002 Salt Lake City Winter Games. “Both the men’s and the women’s teams jumped way up in the world rankings. Of course, funding was critical and they put together the Challenge both to raise money and awareness for our U.S. athletes.

“When Woody (Scott Woodruff, director of media and motorsports at JEGS) asked if I wanted to race as part of the NHRA team going up against the NASCAR guys, I jumped at the chance. I figured not too many civilians would ever have the chance to pilot a bobsled with our Olympic athletes serving as coaches. I knew nothing about bobsleds other than watching on TV but we decided to go for it.”

The Bobsled Challenge had actually taken place for two years prior to the NHRA drivers getting involved but despite their lack of experience, an NHRA contingent of Coughlin, Morgan Lucas, J.R. Todd, Melanie Troxel, Shawn Langdon and Bob Vandergriff attacked Mount Van Hoevenberg in Lake Placid, N.Y., with wide-eyed gusto. 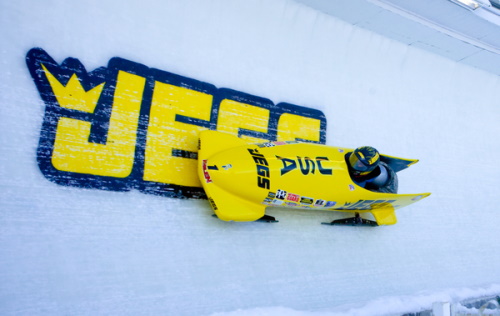 “I clearly remember going to the first event and just being an awe of this little town and the history that had been made there,” Coughlin said. “They took us to the ice rink where the ‘Miracle on Ice’ hockey game had taken place, we went by the giant ski jumping structure, the Olympic Village, everything I saw as a kid watching the Winter Games from there in 1980.

“We had two days of training with the actual Olympic team members helping us every step of the way. As we ascended the road to get to the top of the modern bobsled run, which is all elevated in a climate-controlled track, you could see the old run, carved out of the earth, and they told us of the fatalities that had happened over there. That certainly got you to focus.”

Adjusting for their skill level, the participants raced in two-man bobsleds and did not push-start themselves like Olympians do. Instead, each driver and brakeman were already seated in a sled already on the track. An official would then simply let the sled go and gravity would take over. 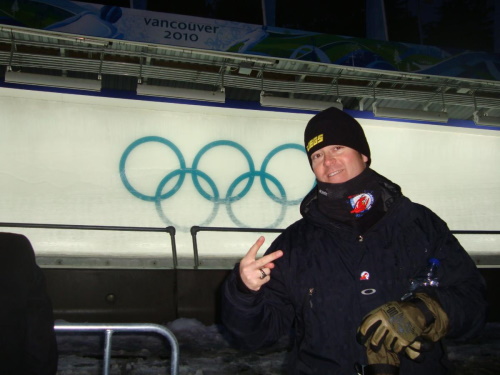 “The closest thing I could relate to was as a kid in Ohio and running our little Radio Flyer wagons down the hill,” Coughlin said. “They had given us a lot of coaching and we walked the entire length of the track, but I could hear the NASCAR drivers talking about cornering and entry and exit points and I thought, ‘well the only thing I have to offer is quick reaction times.’

“The first day of practice was quite an experience. It comes at you fast when you get up to 60-70 mph and it seemed like I hit everything I could hit on the way down. I thought about it a lot overnight but the next day was even worse. Out of 19 drivers I think I was third slowest.

“Fortunately, on game day things came together. It was bitterly cold and snowing a bit and I was third out. My idea was to not steer it much unless I absolutely had to and I ended up putting together a great run. We whittled the field down from there and I ended up third so I was super happy with that result.”

A positive finish and plenty of time with the athletes spurred Coughlin to participate in two more challenges until the entire project ended. His best finish was second overall, in a bobsled that was fully branded in JEGS famous yellow-and-black livery. 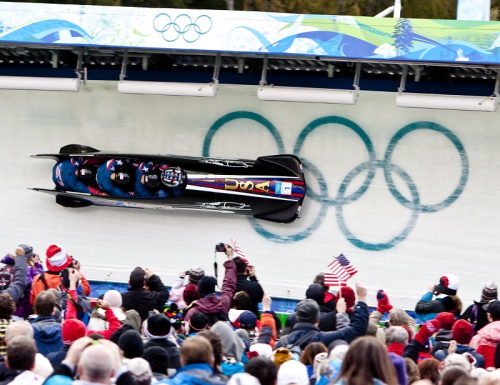 Team USA 1 zooms down the track in the famous Night Train bobsled in Vancouver.

“After that first year I made some notes in my calendar about what I had learned,” Coughlin said. “Lo and behold, about two weeks before the following year’s event, those notes popped up and really kind of got my mind back to thinking about what I needed to do. Overall, it was a wonderful experience. I never crashed so that was good as well.

“The main thing was to help the athletes and get Team USA on top. I was fortunate enough to be a guest of the U.S. Bobsled Federation at the 2010 Winter Games in Vancouver where the men’s four-man team, using a Bo-Dyn bobsled nicknamed ‘Night Train,’ won a gold medal, our country’s first since 1948.

“The next year at the Charlotte 4-Wide Nationals we hosted the four gentlemen who won the gold and NHRA made them Grand Marshalls of the event. We even saluted them with a ‘Night Train’ sticker on my racecar. It was quite an honor to have been a part of it all.” 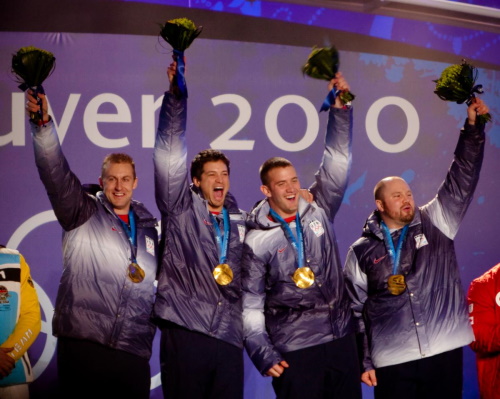 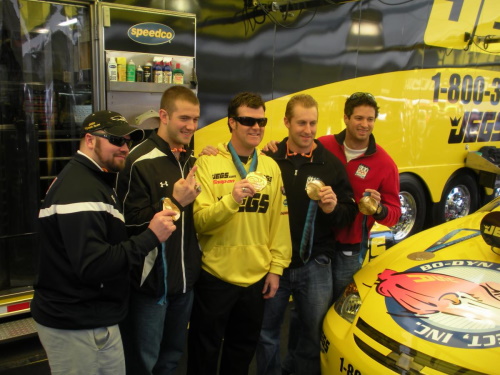