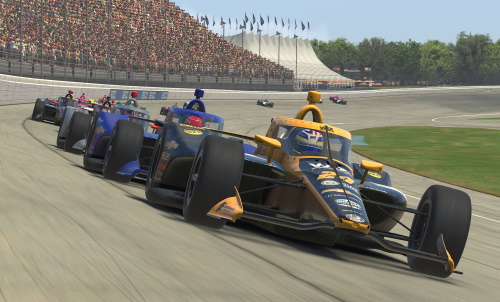 BROOKLYN, Mich. (April 12, 2020) – For the straight race, Sage Karam led the most laps (49) in a INDYCAR iRacing Challenge virtual event, the Chevrolet 275 at Michigan International Speedway, but the 25-year-old Nazareth, PA driver didn’t make it to victory lane Saturday in the 85-lap feature race on the fast two-mile oval track.

Karam, the winner of the inaugural INDYCAR iRacing Challenge at Watkins Glen International two weeks ago, started ninth in the 31-driver starting grid and avoided a huge mishap on the track’s front straightaway at the drop of the green flag. Sage had qualified with a time of 32.791 seconds to Marcus Ericsson’s pole time of 32.765 seconds. 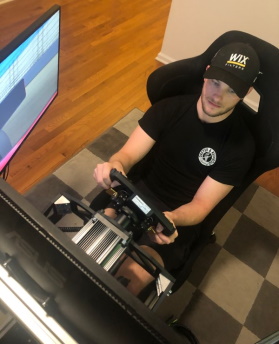 When the restart began on lap seven, Karam was ready to pounce on the lead group and he drove the No. 24 Dreyer & Reinbold Racing WIX Filters Chevrolet to the point on lap 10. He and fellow Chevy driver Will Power put on a tremendous show exchanging the lead until the first pit stop on lap 40.

Sage proved to be the master out of the pits with fast ‘in’ and ‘out’ laps that gave him the advantage over Power and other drivers battling for the lead. By lap 45, Karam was back in the top spot and running the high line at the famed high-banked MIS oval.

Dicing his way through lapped traffic, Karam continued to wage a tight battle with Power when he made his second pit stop on lap 72. Several of the drivers were on a different fuel strategy to make it the checkered flag without a late race pit stop. 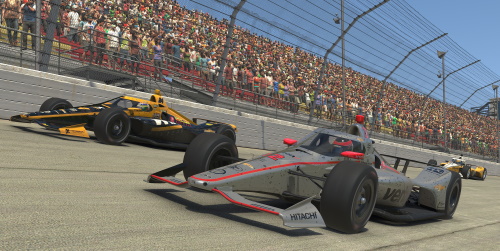 Sage on high line against Power at MIS

Karam, Power and Graham Rahal, the top three before the final pit stop, attempted to slice their way through the field in an effort to return to the front of field. Unfortunately for Sage, lapped traffic once again hurt his charge as he spun on lap 83 in his pursuit of Power. He was able to regain control and return to action, placing 14th at the finish.

For third consecutive INDYCAR iRacing Challenge, Karam led the most laps with 49 of the 85 circuits. In the past three races, Sage has led 116 of 175 total laps. Sage led Saturday on six separate occasions at MIS. 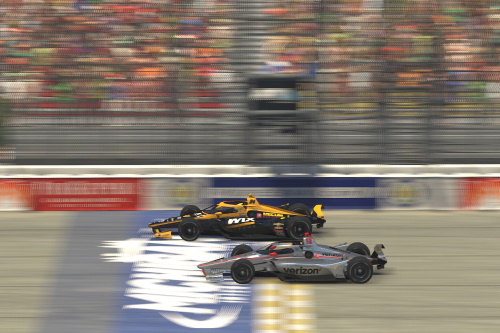 Sage and Will battle for the lead at MIS

“We had a great day,” said Karam. “We led a bunch of laps. It was fun. We knew it was going to be a crap shoot with fuel strategy. For the second straight race, it was fuel affair. It’s all good. This is all about having fun for the drivers and fans. They knew we were here today (Saturday). I was racing with Will (Power) late in the race in an effort to get to the front. And traffic got up with us and I spun. We kind of knew it would be a wild race on an oval. That first crash helping some guys with pit stops and it hurt us. But our pit stops were fast today. We picked up time over the other guys.”

The INDYCAR iRacing Challenge series now moves to Saturday (April 18) with a “Random Draw” race circuit followed by Circuit of the Americas (COTA) on April 25 and an INDYCAR “Dream” track on May 2.