(April 18, 2020) – The NASCAR Whelen Euro Series will take on the virtual racing world with a brand new series, the EuroNASCAR Esports Series. Starting on April 21st with an exciting Prologue Race at the famous Daytona International Speedway Road Course, the virtual championship will then feature seven points-scoring events and for the first time in sim-racing, impact the 2020 real-life NWES Teams Championship.

All NWES teams and more than 60 drivers already confirmed their entry for the first ENES season, ready to battle every Tuesday night live from 20:00 CET in a compact and exciting format.

A CALENDAR FEATURING A MIX OF EUROPEAN AND AMERICAN TRACKS
After the non-championship Prologue event at Daytona, the weekly EuroNASCAR Esports Series will head towards virtual Brands Hatch, UK on April 28 for a night of Pure Racing on the iconic Indy Circuit, home of the popular American SpeedFest in real life. The following Tuesday, the ENES will make a virtual trip to the other side of the Atlantic to race at Watkins Glen allowing European racers to compete at the legendary track in the federal state of New York.

On May 12, the series will return to Europe to celebrate a very special debut: Circuit Park Zandvoort will welcome the NWES drivers for the first time for a night of door-to-door racing on the 4.307 km road course on the North Sea shore. The road course layout of the legendary Indianapolis Motor Speedway will close the regular season on May 19.

For the first event of the double-points paying playoffs, the ENES will return to Brands Hatch to race on the Grand Prix layout for another unique debut. The second Semi Final will then take place at the unique Charlotte Roval in North Carolina while the season will close at one of the crown jewels of the real-life NWES calendar: Circuit Zolder in Belgium.

REAL-LIFE IMPACT: TEAMS CHAMPIONSHIP POINTS FOR THE ENES TITLE
Drivers will not only fight to become the first ENES champion. For the first time, results of the virtual series will also have an impact on the real-life Team Championship of the 2020 NASCAR Whelen Euro Series. At the end of the virtual season, the ENES Champion will bring 40 bonus points to his team, the equivalent of one regular season race, while the runner-up will earn 35 points, third place will be worth 34 points and so on. While in real life two drivers share one NWES car and sum their points for the Teams Championship, in the ENES each driver will compete separately and only the best placed will score points for the team at the end of the season.

This will provide thrilling and exciting battles for the win in the virtual world, as the teams and drivers will chase bonus points that could decide the 2020 Teams Championship battle.

AN EXCITING HEAT RACING FORMAT
With more than 60 drivers already entered, the first ever EuroNASCAR Esports Series will adopt a compact and exciting heat racing format. After a 2-lap qualifying session, two 10-minute Heat Races will each send the top 15 drivers to the Main Event. Those left out from the Heat Races will have one last opportunity to find their way to the final through the 10-min Last Chance Qualifier, which will award six transfer positions. The Main Event Race will be 30 minutes long and award ENES championship points using the NWES points system.

Sure future contenders for the 2020 real-life NWES title – Stienes Longin, Gianmarco Ercoli, Thomas Ferrando, Giorgio Maggi, Lasse Soerensen and many more – will also be on the grid.

The virtual engines of the EuroNASCAR Esports Series will start roaring on Tuesday, April 21st at virtual Daytona International Speedway. All the ENES races will be streamed live on the EuroNASCAR Youtube channel, Facebook page and Twitch profile as well as on Motorsport.tv. 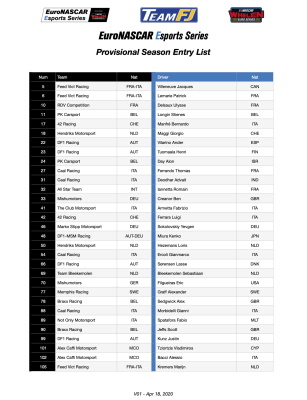 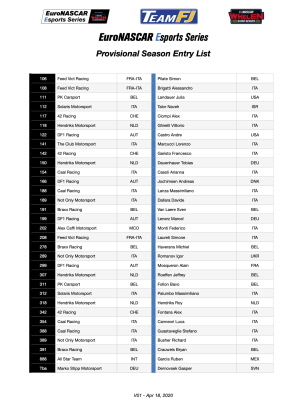