(May 7, 2020) –  Following the evolution of the measures adopted worldwide to face the COVID-19 pandemic and the progressive loosening of the lockdown situation in Europe, Team FJ announced today a revised schedule for season 1 of the EuroNASCAR Esports Series. Beginning with Round 3 at Circuit Zandvoort, the virtual events on iRacing will have a bi-weekly cadence.

The Zandvoort event will take place on Tuesday, May 19, followed by the last round of the regular season at virtual Indianapolis Motor Speedway on June 2. The playoffs will begin with the June 16 event at the Brands Hatch Grand Prix Circuit, while on June 30 it will be the Charlotte Roval to host the penultimate race of the ENES. The series will conclude with the Final at virtual Circuit Zolder on July 14th.

The races will continue to take place on Tuesday evenings at 20:00 CEST and will all be streamed live on the EuroNASCAR Youtube channel, Facebook page and Twitch profile as well as on Motorsport.tv. 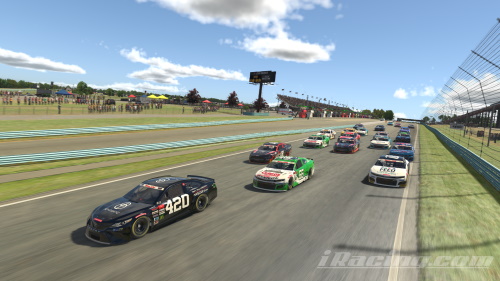