Karam, the winner of the inaugural INDYCAR Challenge iRacing event at the virtual Watkins Glen International road circuit in March, started second in the 10-lap Final with a strong 10-driver field on the fast, tricky infield circuit of the 1.5-mile AMS oval. The 25-year-old driver from Nazareth, Pa., grabbed the lead in the first turn and fought off three-time U.S. Rallycross champion Scott Speed for the majority of the finale.

However, iRacing veteran Mitchell DeJong, a three-time iRX All-Star Invitational race winner this year, waited until the last lap to use his shorter “Joker” turn and slid by Karam to take his fourth iRX Final win by just 0.564 seconds at the checkered flag. Speed finished third. 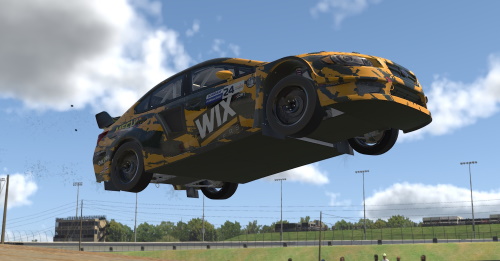 It was a tough night for Karam’s DRR teammate Conner Martell, who looked strong his heat race with the #21 ALiAS Sport Subaru WRX STI machine. As Martell fought with IndyCar driver James Hinchcliffe for the lead, Hinchcliffe’s car hit Martell’s Subaru and caused the Vermont driver to spin into the wall. Conner had to come from 10th in the Last Chance Qualifier and placed second. Unfortunately, only the winner advanced to the 10-car Final race at Atlanta.

Karam, who won a real ARX2 Lites Rallycross final last year at Mid-Ohio Sports Car Course, finished third in his six-lap heat race and won his LCQ event to advance to the Final in the DRR WIX Filters mount.

Sage is no stranger to iRacing competition with wins in IndyCar and Sports Cars virtual action, but Friday’s virtual Rallycross contest, featuring drivers from Rallycross, IndyCar, NASCAR, NHRA, Off-Road, Action Sports and Formula Drift, was his initial showing in the format.

“Wow, what an event with iRacing Rallycross!” said Karam. “I knew Mitchell, my teammate in Sim racing sports cars, was waiting to use his ‘joker’ at the end, and I thought I still had enough gap to win the Final. But he flew by me on the last lap to take the win. It felt like a win for me, though. I didn’t expect much in my first iRacing Rallycross race. I was just hoping to make the 10-driver Final.

“At the end of the race, I was trying to be smooth, but I may have pushed too hard. I was trying hold my lead. Mitchell and Scott have been very helpful this week in teaching me about the iRacing Rallycross racing. It’s much different from the real thing. But it was great fun. I’m anxious to race in the final race in the series next Friday night.”

The final Subaru iRX All-Star Invitational Rallycross event in the six-race series for charity will be a return to the site of the series opener at Hell Lankebanen, Norway on Friday (May 15) at 6.p.m. ET/3 p.m. PT. The Norway iRX iRacing finale will be streamed across iRacing’s social media platforms, with live streaming simulcasts on the Facebook pages of competitors, teams and sponsors. Karam will also have his ‘in-car’ stream on Twitch.TV for media and fans through sagekaram24.