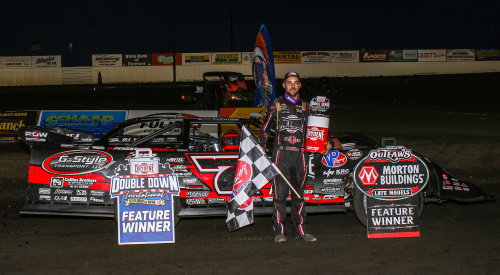 JACKSON, MN (May 23, 2020) – It took years for Ricky Weiss to win that elusive first career Feature with the World of Outlaws Morton Buildings Late Model Series. The second win took him only eight races.

Holding off the field from start-to-finish, Weiss of Headingley, Manitoba, Canada, rocketed around the outside and drove by Brent Larson into Turn 1 on the opening night of the Drydene Double Down Invitational as the World of Outlaws Morton Buildings Late Models RETURN to RACING for the first time in 77 days at Minnesota’s Jackson Motorplex was completed following state, local and CDC guidelines. 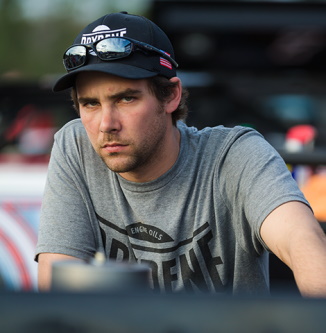 “I was just so excited to finally get going and race again,” said Weiss in a quiet victory lane since the event was run without fans due to local mass gathering restrictions. “I wanted to do it safely; the Outlaws took their time and did it right. This is a race I was looking forward to. We did really good at Knoxville and, well, this is a mini-Knoxville. It’s a wonderful facility and I was just praying the rain would hold off.”

Drawing the outside pole of the 30-lap Feature, Weiss took the green flag with Brent Larson of Lake Elmo, MN, in pole position. Jumping to the early lead, Weiss quickly overtook Larson into Turn 1 and brought Shannon Babb of Moweaqua, IL, with him into second. Babb, who pieced his new Team Zero Race Cars ride together late last night and then hauled to Jackson, was the fast qualifier with a quick time of 15.886 seconds around the 4/10th-mile.

After a slew of cautions hampered the early running, the pace finally picked up in a hot and heavy manner. Racing on a lightning fast surface, Weiss clocked a run of 15.379 seconds on the fifth lap of the feature, which was over a half-second faster than Babb’s quick time and even faster than Scott Bloomquist’s track record of 15.402 from 2018. With the absurd speed underneath him, Weiss built a full-straightaway advantage by the next caution on Lap 5.

“These Bloomquist Race Cars are so strong on the bottom,” Weiss said. “You know 10 years back I was a high side guy through and through, but man this thing just turns so great down low.”

Once the Turn 2 calamity halted on Lap 6, Brandon Sheppard of New Berlin, IL, made his presence known with an immediate charge to the front. Starting 10th, “B-Shepp” shot forward and drove his Rocket1 Racing #1 to the third spot in just six laps; then moved into second on Lap 9. With 21 laps remaining, it seemed as if all signs were pointing to a showdown between Sheppard and Weiss, who sit first and second in the current championship standings.

“Jason was keeping me calm with the signals there,” noted Weiss on those behind him. “We have great communication together and he’d signal me for when they’re coming, when I need to go, when I need to hold back. I really just can’t thank my guys enough. I know my dad and girlfriend are driving home watching (on DIRTVision) and my mom is watching too, I wish they could be here.”

In fact, it was wishful thinking that Weiss himself made it, let alone his family. A week ago, the 31-year old pilot was doubting he could even cross the Canada-United States border due to COVID-19 regulations. In the end, Weiss was able to make the trip and made it worth all the trouble.

His $6,000 score didn’t come without a hint of worry, however. Sheppard initially cut Weiss’ lead down from more than 2.4 seconds behind to less than one second, but that’s all the two-time and defending World of Outlaws could muster in his chase-down of the Team Drydene #7.

A restart with 12 laps remaining bunched the field up one more time, but Sheppard, Babb and the rest could do little-to-nothing in stopping Weiss on this night. The reigning Rookie of the Year ran off into the Jackson night and crossed the finish line for his second career World of Outlaws Morton Buildings Late Model Series victory, a win by 1.203 seconds over Sheppard.

“I, and all of us, really owe Drydene a big thanks for what they’re doing here,” said Weiss, who sports the Drydene Performance Products look on his Team Zero Race Car. “They’ve thrown up a lot of money for us to compete this weekend and they support several guys back here in the pit area. It should be a great show tomorrow with $20,000 on the line.”

Although it wasn’t much, the four points that Weiss snookered from Sheppard is still good enough to trim the championship chase down to 52 points between the two, with Sheppard maintaining command. A strong runner-up result from the fifth row was certainly appreciated by “B-Shepp” and the Rocket crew, but they know they have ground to make up.

“We had a really balanced car in the feature, I mean before the top got dirty I could really move around,” Sheppard stated. “I just messed up qualifying with the wrong line. I haven’t been up to par lately and it has cost us later in the night. I’ve been really struggling there since the pandemic, so I’ve got to do a better job of qualifying to position us better in the feature.”

For a team that won five of the first seven races and then 18 overall in 2019, this kind of victory lane absence is rare territory for Sheppard and the Rocket Chassis house car. He’s been incredibly consistent with 10 Top-10 results in 10 races this year, but a victory via another driver’s disqualification at Volusia Speedway Park is his only mark in the W column with the World of Outlaws in 2020.

“We want to win,” Sheppard said on his runner-up finish. “We want to win bad. Our consistency is there, but we just have to put full nights together and that starts with me in qualifying. We’ll get adjusted for tomorrow and hopefully go after that $20,000.”

Rounding out the field behind Weiss and Sheppard was four-time DIRTcar Summer Nationals champion, Shannon Babb. After setting quick time and redrawing the third slot, Babb was strong in the early running, but was unable to maintain pace in the closing stages. A third-place finish in a brand-new car that was finished last night was more than enough to send the Moweaqua Missile back with a smile on his face though.

“This was our first time here at this track, and man it raced really well,” Babb explained. “Ricky was by far the best car tonight, he could just roll the corners so well. For our first night on this car, I was blown away. It was so much fun to drive. I’m excited for what’s to come.”

In the fourth spot was Chase Junghans of Manhattan, KS, who completed a superb 16th-to-4th bid in his #18 entry. Chris Madden closed out the top five in his Scott Bloomquist Racing, Team Drydene #0M. Completing the Top 10 was Ricky Thornton Jr. in sixth, Jeremy Grady in seventh, Darrell Lanigan in eighth, Ashton Winger in ninth, and Matt Cosner in 10th.

The World of Outlaws Morton Buildings Late Model Series will be back at Jackson Motorplex Saturday night with a $20,000-to-win, $1,000-to-start program in the Drydene Double Down Invitational. No fans are permitted to the participant-only event, but fans can watch all the action LIVE at home via DIRTVision.