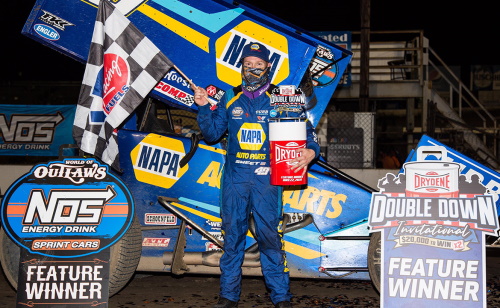 PEVELY, MO (May 23, 2020) – Brad Sweet’s win Friday night at Federated Auto Parts Raceway at I-55 was a return to form for the reigning champion after a disappointing return at Knoxville, but it came with a challenge.

A challenge from his own brother-in-law Kyle Larson. 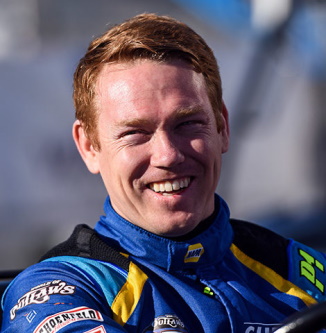 There was no family love in their battle. Both wanted the win just as bad as the other, racing clean but hard. However, the reigning champion made the right move at the right time to hold off Larson to win the first night of the Drydene Double Down Invitational against a star-studded field and in front of a limited crowd of fans in the stands — the first return of fans at a World of Outlaws NOS Energy Drink Sprint Car Series race since February.

“That was a lot of fun,” Sweet said. “Kyle is an unbelievable talent. He’s my brother-in-law, but he makes me earn these wins dammit… It’s a lot of fun to see fans back in the stands. It’s not a lot of fun to win in front of empty grandstands. Hopefully the crowds keep getting bigger and bigger.”

Larson, in his first World of Outlaws appearance at I-55, stunned everyone and gave Johnny Gibson a reason to hit his high octave of excitement by announcing Larson’s incredible track record setting 9.995 sec. qualifying lap around the 1/3-mile track. It’s the first lap under 10 seconds at the track for the World of Outlaws.

Shortly after, the attention turned to Jacob Allen — poised to potentially win his first World of Outlaws race. He took a dominating win in his Drydene Heat Race and then bolted by Sweet at the start of the DIRTVision Fast Pass Dash to claim the pole for the 30-lap Feature.

Allen was impressive in the early laps for the Feature. He pulled ahead of second-place Shane Stewart by half a straightaway in the first three laps and when Sweet moved into the runner-up spot and caught the Drydene #1A Shark Racing car in lap traffic, Allen was still able to hold the hungry champion behind him.

However, a mistake on a restart after a caution nine laps into the Feature cost him the lead. He eventually fell to fifth but is not hanging his head. The Pennsylvania driver had a smile after the race and an attitude of confidence.

“All of these guys have a chip on their shoulder, we’re only getting to race so much,” Allen said. “Those guys that ran in front of me, the other four there, are aggressive racers and the track was aggressive. I’m not hanging my head about it at all. I was leading laps. I felt very strong. I wasn’t looking forward to the caution, but I wasn’t scared of it either. I just think I drove through too hard through the bottom and it took me a few laps to get going. Other than that, I felt like I was ripping just as good as anybody and had a car to win the race.”

Larson followed Sweet by Allen and began to slowly real him in every lap. He looked to steal the lead with 12 laps to go on a restart by diving under Sweet in Turn 1 but didn’t have the traction to pull it off. Sweet sped away and Larson’s slow exit off Turn 2 put third-place Logan Schuchart on his bumper.

A few laps later Sweet found himself caught in lap traffic, giving Larson another opportunity to go after the NAPA Auto Parts #49 car.

He stalked his brother-in-law for several laps before throwing another slide job at him in Turn 3. This time he made it stick, taking the lead with five laps to go. Sweet wasn’t done with Larson either, though.

The next corner, while Larson went high, Sweet dove to the bottom and found enough grip in the track for his Hoosier tires to dig into and charge ahead of Larson’s Finley Farms #57.

With the lead back in his hands, Sweet rode the high side hoping to block any on coming run by Larson and make him have to pass him down low. Larson built up a run to take another shot at Sweet but ran out of time before Sweet was the first to see the checkered flag.

“Early in the race I was tight and waited for the racetrack to come to us,” Larson said. “I could maintain with him (Sweet) and was able to slide by him once in traffic, but I couldn’t get the grip I needed to stay in front of him. It was a good race. Good run for our team. We’ve struggled a lot so far this year with the 57. Good run. Hopefully we can come back tomorrow and win and click off some good finishes.”

For Sweet, he said he gave it everything he had in the physically demanding race.

“There were some developing lines on the racetrack,” Sweet said. With him (Larson) behind me, I thought the top would be the place to be. But he found the middle and I got stuck behind in lap traffic there. Just need to do a little better job on my end. They (Kasey Kahne Racing team) gave me a great race car. It was a lot of fun to be back.”

Schuchart rounded out the podium and maintains the points lead by four points over Sweet. Ten-time Series champion Donny Schatz, who finished seventh, has now moved up into third — 26 points behind Schuchart.

Drivers will compete for an incredible $20,000-to-win prize on Saturday for night two of the Drydene Double Down Invitational at Federated Auto Parts Raceway at I-55. All of the action can be watched LIVE on DIRTVision, starting at 6 p.m. (CT).