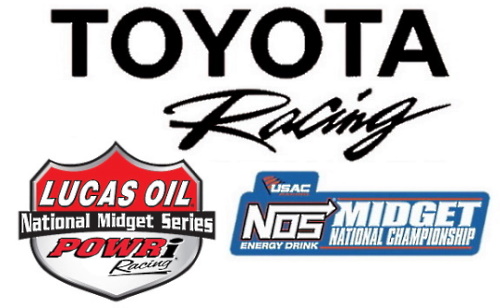 Daum, a three-time POWRi champion, earned his 21st national Midget car feature with Toyota, marking the sixth of the year for the manufacturer and the 294th in program history.

Daum was joined on the podium by 15-year-old Emerson Axsom, who earned a runner-up finish in his POWRi debut with the Petry Motorsports Toyota team. Ace McCarthy made it three Toyotas in the top-five with a fifth place showing.

In Tulsa, Toyota-powered drivers led the first 10 laps of the night in an incident-filled 40-lap feature. Kevin Thomas, Jr., took the lead at the green flag, but was able to hold down the top spot for just one lap before Windom took over the position on lap two.

Windom held the point through lap 10 before he and eventual race winner Justin Grant would trade the lead three times over the next three laps with Grant taking over first place for good on lap 13.

While Grant was able to maintain a consistent lead, the action behind him was intense throughout the feature. Thomas ran in the top-five for much of the event and was battling for second with Windom on lap 25 when he slid to a stop in turn one after attempting a slider to take over second. He would re-fire, but was forced to re-join the field at the back of the pack.

As the laps began to wind down, it was another Toyota driver, 17-year-old Cannon McIntosh, who was making a charge for the runner-up position when he got up over the cushion and hit the turn four wall. He was able to continue, but forced to the back of the field.

As Grant took the checkered flag, Windom finished second and was joined in the top-10 by fellow Toyota drivers Andrew Layser in sixth, Thomas Meseraull was seventh, Buddy Kofoid placed eighth and Daison Pursley recovered from an early spin to finish ninth.

The POWRi Lucas Oil National Midget League is back in action Sunday night at Valley Speedway, while the USAC NOS Energy Drink National Midget Series returns to the track with six races in six nights during Indiana Midget Week, kicking off at Paragon Speedway, June 14.