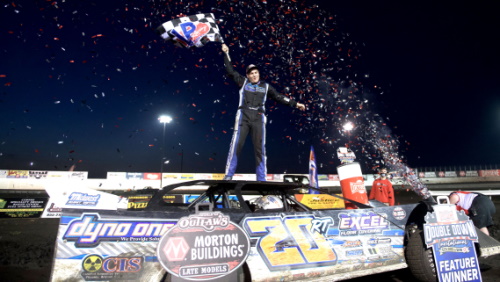 JACKSON, MN (May 24, 2020) – One mistake. One tiny slip-up. One window of opportunity to strike. That’s all Ricky Thornton Jr. needed on Saturday night.

He got just that on the 53rd lap of the $20,000-to-win Drydene Double Down Invitational at Jackson Motorplex.

After waging war with Chad Simpson all race long, a costly error in Turn 2 sent Simpson’s #25 machine over the cushion and the race lead landed right in the lap of Chandler, AZ, native Ricky Thornton Jr. Controlling the final seven laps with Friday’s winner Ricky Weiss and two-time champion Brandon Sheppard hot on his tail, Thornton fought off the nerves and held on for his first career World of Outlaws Morton Buildings Late Model Series victory in an exciting Minnesota showdown.

“This is huge,” Thornton let out in victory lane. “I’ve always wanted to run a Late Model and Todd and Vicky Burns have made this dream come true for me. I swear I have never gotten nervous in a car, but that was for sure the most nervous I have ever been those final seven laps.”

From the jump of Saturday’s 60-lapper, it was all about Thornton and Simpson. The duo brought the 24-car field to the green flag after both took heat race wins and pulled the 1-2 pills in the Morton Buildings redraw. While Simpson controlled the majority of the race, it was Thornton who paced the opening circuit after nailing the low-line around the Jackson 4/10th-mile. While Thornton was quick down low, Simpson was quicker up top and blew by the No. 20RT to assume the lead on the second lap.

Slipping back to third on Lap 6, Thornton quickly rallied after Chris Madden passed him for second and drove back around the Scott Bloomquist Racing, Drydene #0M to reclaim his spot. From there, Simpson went searching out front and allowed Thornton to close. They ran side-by-side down the backstretch on Lap 9, but Simpson proved too strong on the high side and maintained control. Before a caution with 16 laps down, the duo ran off into lap traffic while the battle for fourth heated up between Justin Zeitner, Scott Bloomquist and Weiss.

On Lap 26, the door-to-door battle was back as Thornton caught Simpson again, but a mistake of his own in turn two cost Thornton serious ground just shy of halfway. He caught him again and provided another serious challenge in lap traffic on Lap 40, but a caution halted the action. The ensuring restart nearly changed the whole race when Weiss drove underneath Thornton momentarily, but another caution saved Thornton and slotted him back into second.

“I kept running around the top and then all of a sudden Weiss got under me and pretty much passed me,” noted Thornton. “I thought that as long as I could get back by him and maybe block him, I could hang on. You just get such a good run from center-off-to-exit, but your straightaway speed isn’t as good.”

Proving his speed time and time again, Thornton managed to reel Simpson back in on each and every occasion. However, it’s one thing to catch ’em, it’s another thing to pass ’em. That’s where Thornton struggled in his race-long chase for the lead. With that in mind though, Thornton went to the intimidation tactics.

“I just wanted to make him drive harder and maybe slip up,” said Thornton on his late-race game plan. “I honestly think my only shot was to slide him off Turn 4 and hope that we didn’t wreck. The odds are we honestly probably would have ran second tonight. I could tell that the cushion kept getting more and more gnarly over there, so I just kept showing my nose down there. I wanted to pressure him and show him I was there. Then I got that one big mistake, and it was it all it took.”

That mistake came on Lap 53, when Simpson railed around the outside a little too heavy, and he jumped the cushion at the exit of Turn 2. Watching his golden opportunity develop right in front of his own eyes, Thornton stabbed the brakes, turned down the track, and drove by Simpson to claim the race lead with seven laps remaining.

A restart with six laps left set the stage with Thornton out front for the first time since the green flag dropped. A strong restart followed by a three-way battle for second between Simpson, Weiss and Sheppard, all played a part in helping Thornton escape from the hornet’s nest behind him. After Weiss and Sheppard disposed of Simpson, they made one last ditch run at Thornton, but didn’t have enough as he earned $20,000 with a win in the Drydene Double Down Invitational.

“Maybe if we had five more laps, I might have had something,” Weiss thought. “I got besides Ricky a few times, and maybe if I made a move sooner that could’ve been me there to capitalize when Chad slipped up. They were just so good once they built their momentum up, I was great on restarts and could get to their door, but they eventually got away every time.”

It wasn’t a win like Friday’s triumph, but a second-place result for the Headingley, Manitoba native still allowed him to ever-so-slightly cut down Brandon Sheppard’s young point lead. Leaving Jackson, Sheppard is ahead of Weiss by 52 markers through the first 11 races of the 2020 World of Outlaws Late Model campaign.

“It’s still so early in the season, Brandon is always gonna be there,” Weiss said on the points situation. “We’re just gonna do what we do and not worry about him. If we beat him, we beat him. He’s a strong racer and he’s smart with points, so it’s way too early for me think about that.”

For Sheppard, his incredible streak of a top-10 finish in every single feature this season was extended, but so was his absence from victory lane. The Rocket1 Racing crew won the opening night of the DIRTcar Nationals at Volusia Speedway Park in February, but that came on a post-race disqualification, so the victory lane celebrations were nixed. That means it’s been 267 days (Aug. 30, 2019) since they were last in World of Outlaws victory lane, a number that’s been bothering “B-Shepp.”

“I’m definitely disappointed we didn’t win one this weekend,” said third-place Sheppard. “Especially considering how good my car was. I just needed to be more aggressive in the beginning. We have got to work on qualifying and win some heat races to start up front.”

Trailing Thornton, Weiss and Sheppard to the line was Chad Simpson in fourth-place after leading 51 laps of the 60-lapper. Chris Madden rounded out the top-five in fifth.

The World of Outlaws Morton Buildings Late Model Series will continue the RETURN to RACING tour next weekend with an “Inside Out” doubleheader. Competing at Iowa’s Davenport Speedway on Friday & Saturday, May 22-23, the Outlaws will race on the quarter-mile infield oval on Friday night before switching to the big half-mile outer oval on Saturday evening.