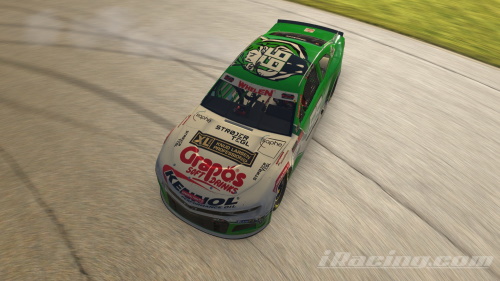 (June 10, 2020) – The regular season finale of the EuroNASCAR Esports Series at virtual Indianapolis Motor Speedway delivered another fantastic show together with the fifth different winner in as many events on iRacing. Lasse Soerensen grabbed the checkered flag in the 30-minute Main Event race with a dominant performance and extended his lead in the points standings for DF1 Racing. 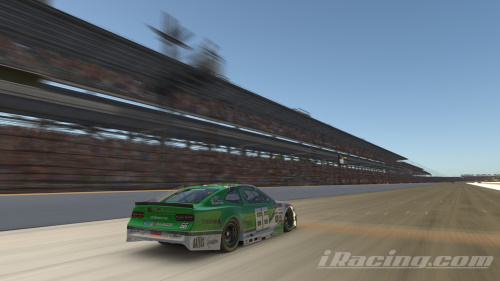 DF1 Racing monopolized the front row of the Main Event race at the Indianapolis road course thanks to Andre Castro – the American scored the pole position and won Heat 1 – and Soerensen, who posted the second fastest lap around the 4.192-km track and won the second Heat of the day.

Castro led the initial part of the Main Event with Soerensen sitting in his shadow and a five-car group forming at the front. The DF1 Racing duo was closely followed by a trio of Hendriks Motorsport drivers: Loris Hezemans, Jeffrey Roeffen and Tobias Dauenhauer.

Eight laps into the race, Soerensen made a move on his teammate and Castro let the Dane grab the lead feeling he wasn’t as fast as him. While Soerensen quickly built a consistent advantage culminating in a 4.743 seconds advantage under the checkered flag, Castro came out the winner in a spectacular door-to-door battle for second place to make it a 1-2 finish for Austrian powerhouse DF1 Racing. 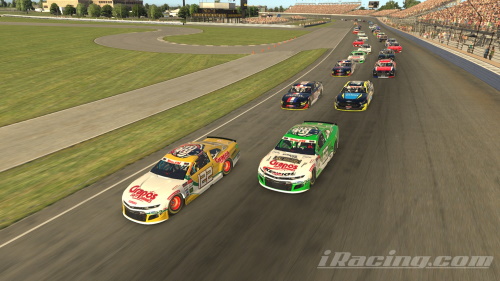 “It was a good race and I had a very good pace,” said 2019 EuroNASCAR 2 Champion Lasse Soerensen. “I really felt that I could manage the tyres throughout the whole race. I have to thank Andre for playing it fair and letting me by easily. I think that was the best thing we could do for the team. All in all it was a good race for the whole team as we scored a lot of points.”

Managing tyres was the key to success and Castro struggled for a handful laps on his rubbers. He initially lost second to Roeffen but was able to pass the Dutchman in a four-way battle and beat the Hendriks Motorsport trio. Reigning NWES Champion Loris Hezemans finished a close third and completed the podium of the ENES Round 4 at Indianapolis Motor Speedway. Roeffen and Dauenhauer, who won the third Heat of the evening, rounded out the top-5.

“I didn’t lift or anything,” Castro said about the lead change that decided the race. “He had a good run on the infield straight and he was faster than me for a couple of laps so I didn’t defend my position. I thought I could just follow him and get in the rhythm but he had a very good pace and he was definitely faster than the rest of the field.”

By splitting the top-5, DF1 Racing and Hendriks Motorsport confirmed their status as the main contenders for the ENES title and the 40 points going to the real-life team who will win the inaugural EuroNASCAR Esports Series championship. 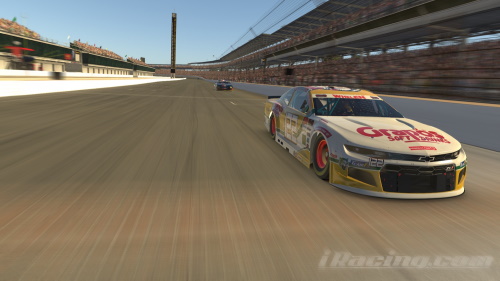 Feed Vict Racing teammates Marijn Kremers and Simon Pilate ended up sixth and seventh, scoring their best result of the season for the newly formed team owned by Jacques Villeneuve, Patrick Lemarie, Dario Caso and Onofrio Veneziani. PK Carsport team member Bavo Follon was eight and bested RDV Competition’s Ulysse Delsaux. The Frenchman, who entered the event fifth in points, was shuffled back to 20th place after an early contact, but fought his way back up to the top-10. Bryan Crauwels rounded out the top-10 for Braxx Racing.

After Round 4 at Indianapolis Motor Speedway, Soerensen leads the standings with 145 points. Roeffen sits in second 10 points behind the Dane and 2 points ahead of Hezemans. Castro is fourth with a 22-point gap from Soerensen and Dauenhauer completes a top-5 once again split between DF1 Racing and Hendriks Motorsport. Ulysse Delsaux is sixth for RDV Competition.

The ENES will virtually return to the UK next week, on Tuesday June 16th, to open the playoffs on the Brands Hatch Grand Prix Circuit. It will be the first time for NWES drivers and teams on the longer layout at Brands Hatch and Soerensen will be the strong favorite at a track he has a very special bond with. 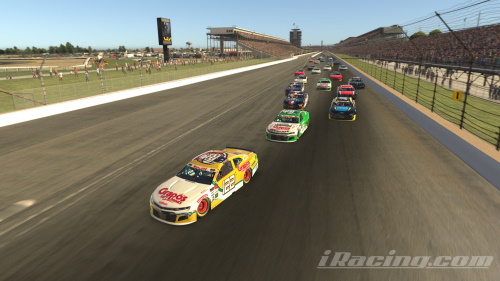 The hunt for the first ever ENES title and a unique Tijey ring is on with double points on the line at each of the next three events. Who will crown himself ENES Champion? Semi Final 1 will be broadcasted live on the EuroNASCAR Youtube channel, Facebook page and Twitch profile as well as on Motorsport.tv