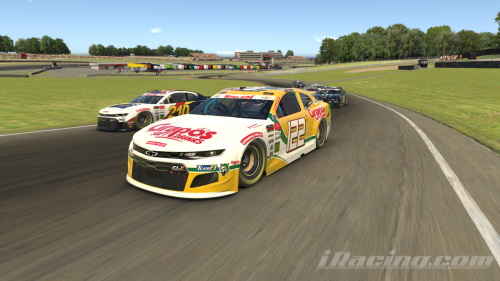 (June 15, 2020) – For the very first time, the NASCAR Whelen Euro Series drivers and teams will take on the Grand Prix layout at the traditional home of the American SpeedFest in Brands Hatch, UK. Semi Final 1 of the EuroNASCAR Esports Series kicks off the playoffs with double points on the line in the 30-minute Main Event race. Lasse Soerensen leads the championship after a thrilling regular season with five different winners in five events including the Prologue.

For the first time in NWES history, drivers and teams will battle on the GP layout of the Brands Hatch Circuit. The 3.908-kilometer old-school road course features 9 turns, high speed straights and plenty of elevation changes, making it a new exciting challenge for the ENES field. Brands Hatch, home of the real-life American SpeedFest will host ENES for the second time this season. Guillaume Deflandre won a thrilling battle on the Indy Circuit in Round 1. 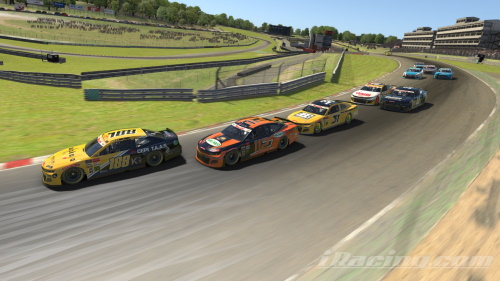 NWES track partners will be represented by a strong and diverse drivers lineup in the virtual trip to the UK. Circuit Ricardo Tormo will rely on sim racing ace Pablo Lopez to compete for the overall win at the wheel of the #413 Fordzilla NASCAR Fest Mustang. Round 2 winner and Simracing professional Michal Smidl will return to take over the wheel of the #483 Autodrom Most NASCAR Show Toyota, while Michael Niemas will drive the #479 Camaro for the Hockenheimring American Fan Fest.

While awarding double points in the 36-driver Main Event race, the ENES format remains unchanged for the playoffs. After a 2-lap qualifying session, three 10-minute Heat races will send 10 drivers each to the Main Event. A 10-minute Last Chance Qualifier gathering all the competitors eliminated from the Heats will then provide one more chance for the top-6 to advance to the 30-minute Main Event.

ENES Semi Final 1 at the Brands Hatch Grand Prix circuit will be broadcasted live on Tuesday June 16 from 20:00 CEST on the EuroNASCAR Youtube channel, Facebook page and Twitch profile profile of EuroNASCAR and on Motorsport.tv