ST. LOUIS (June 17, 2020) – During last Thursday’s ADRL LIVE presented by Twin Lakes Whitetails broadcast from his home in Lake Saint Louis, Mo., American Drag Racing League CEO Kenny Nowling announced the return of ADRL’s popular Battle for the Belts competition for the Pro Extreme class. The ADRL kicked its season off last weekend at the Texas Motorplex where Frankie “The Madman” Taylor took the first victory of the four-race series.

The Battle for the Belts has seen some of the top names in doorslammer history hoist the ADRL strap, including Taylor, John Lynam, Bubba Stanton, Jason Scruggs, Todd Tutterow, and Von Smith. This year’s field will see the top 4 PX racers after the third race on the schedule (to be revealed very soon) face off during qualifying Friday, Oct. 23 at the season-ending Dragstock event at World Wide Technology Raceway near St. Louis. The winner takes home $10,000 in cash. 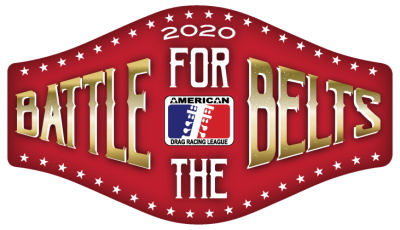 “What’s cooler than a world championship belt around your waist?” said ADRL President Mel Roth. “It’s the coolest trophy in racing, hands down, and we’re stoked to bring this competition back. One of the first questions I was asked when I came to ADRL was ‘When are you bring back the Battle for the Belts?’ We’ve got a great Pro Extreme field this year and if Dragpalooza last weekend was any indication, it’s going to be a great battle.”