The event is the first NHRA Mello Yello Drag Racing Series event since the COVID-19 pandemic and will be the third of 19 events that make up the 2020 schedule. The event also will be the first this season for the Pro Stock Motorcycle class, which was originally scheduled to begin competition at the Amalie Motor Oil NHRA Gatornationals in mid-March before all racing was halted.

The event, the first of two consecutive weekend events at the historic venue, will be covered on the NHRA on FOX family of channels including a live FOX national broadcast network for Sunday’s final eliminations and qualifying Saturday on FS1.

A limited number of tickets have been offered to NHRA members and to ticket holders for the Denso Spark Plugs NHRA U.S. Nationals. If you are in either of these groups and are interested in attending but have not received an email offer, please call 800-884-NHRA.

The race will also mark the resumption of competition for the Mickey Thompson Tires Pro Bike Battle, a special event-within-an-event for top Pro Stock Motorcycle qualifiers with a $25,000 payday that will take place when the NHRA returns to Indianapolis for the Denso Spark Plugs NHRA U.S. Nationals in late August. Matt Smith is the current points leader in the Battle standings with 1,265, leading a pack that also includes Andrew Hines (1,210), Jerry Savoie (1,185), Eddie Krawiec (1,120), Karen Stoffer (1,100), Angelle Sampey (1090), Steve Johnson (1,060), and Hector Arana Jr. (1,010).

On July 18-19, Lucas Oil Raceway again will host Top Fuel and Funny Car competition along with the 2020 season debuts of the E3 Spark Plugs NHRA Pro Mod Series and the SAMTech.edu NHRA Factory Stock Showdown and the resumption of the Mickey Thompson Tires Top Fuel Harley Series that competed at the season’s first two events. That event will also air on the FOX broadcast network and will also include the track’s Summit Racing Series bracket cars and Jr. Dragsters. 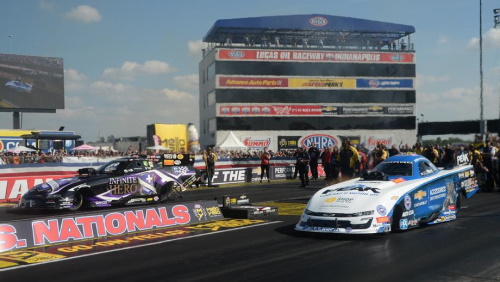