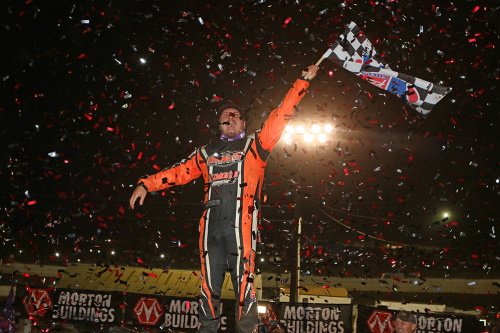 Bulls Gap, TN (June 21, 2020) – That first-career win is a moment that drivers never forget. On Saturday night at Volunteer Speedway, Zack Mitchell saw his moment and seized it.

Leading from wire-to-wire, Mitchell of Enoree, South Carolina rolled into Bulls Gap, Tenn. and grabbed the bull that is the star-studded field of World of Outlaws by the horns. His reward for that first career Morton Buildings Late Model Series feature win? A cool $10,000 check.

“Man, if you would’ve told me I would win this race on the way up here, I would’ve said you’re a liar,” Mitchell said in disbelief after a jubilant celebration. “This is just surreal. To come here and win against competition like this, I just can’t believe it.”

Earning the outside pole of the 50-lapper thanks to a heat race victory and fourth-place qualifying effort, Mitchell lined up on the front row alongside Darrell Lanigan of Union, Ky. in the catbird seat. Lanigan, chasing his 74th career World of Outlaws win, raced into turn one with control of the lead, but Mitchell quickly find momentum on the high side and rocketed by Lanigan’s No. 29V to assume the lead down the backstretch.

From there, a 29-lap green flag run brought the feature to life as the field stretched out and jockeyed for position. Entering lap traffic on lap 10, Mitchell faced his toughest task as he had to navigate the back markers with a rear view mirror full of Darrell Lanigan and Dale McDowell. While it was Mitchell, Lanigan and McDowell occupying the podium spots, Friday’s polesitter Scott Bloomquist of Mooresburg, Tenn. and Friday’s winner Brandon Sheppard of New Berlin, Ill. gave chase to them. 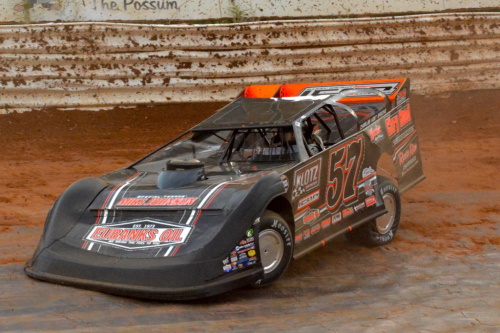 Mitchell was 4th-fastest & won his heat before leading all 50 laps of Saturday’s feature at Volunteer Speedway. (Ryan Roberts Photo)

Dealing with a trio of restarts just past halfway, Mitchell was never seriously challenged while McDowell focused on passing Lanigan for second, which he did on lap 30. Acing the final restart with 19 laps left, Mitchell quickly distanced himself from McDowell with assistance of a near-perfect Barry Wright Race Cars, Clemons powered No. 57.

“I was just aiming that thing into the corner and it went anywhere I wanted,” Mitchell said on his car’s ability. “This thing was flawless. Barry Wright Race Cars, Clemons horsepower, everything ran great. It’s pretty cool to race on a track like this. We don’t get many slick tracks around home.” 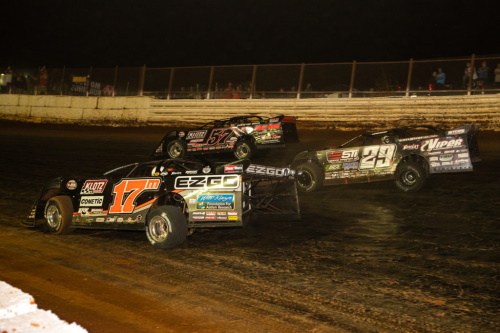 Mitchell found lap traffic one final time with ten laps left, but his 2.2 second cushion over McDowell became essentially unbeatable. McDowell of Chickamauga, Ga. ran it down to 1.3 seconds, but ran out of time as the checkered flag dropped and Zack Mitchell sealed the deal on his first career World of Outlaws Morton Buildings Late Model Series feature win at Volunteer Speedway.
“Hats off to everyone on this deal: my dad, Tim, Mike, Dalton my fiancé, they all mean so much to me,” an emotional Mitchell let out. “I know I’m forgetting somebody, but wow. I’m out of breath. I think I held my breath the whole 50 laps.”

Chasing Mitchell to the line with a second-place finish was Dale McDowell aboard the Shane McDowell Racing, E-Z-GO Vehicles No. 17M Team Zero Race Car. A former two-time winner at the Bulls Gap 4/10th-mile, McDowell was strong on Saturday night, but not strong enough to stop a determined first-time winner.

“I feel like I was probably a little better on the bottom side of the race track managing my tires, but those guys were a little better farther up,” McDowell noted post-race. “It just wasn’t our night. Congratulations to Zack, I know this is a huge win for him and he drove a really great race.”

Darrell Lanigan, who authored a remarkable turnaround from his past few performances, returned to peak condition with a podium run at Volunteer. Finding the speed in the Barry Wright Race Cars No. 29V again, the three-time World of Outlaws champion became a force at the front again and actually gained ground on Brandon Sheppard and Ricky Weiss in the title hunt, where he sits third.

“We just lacked a little bit of instant traction, but all in all we had a great car all night long,” Lanigan said afterwards. “I’m just really proud of these guys. We struggled hard this pat month and they went home to work on this car and got it way better. Dale [McDowell] was just better than us on restarts there, but overall no complaints.” 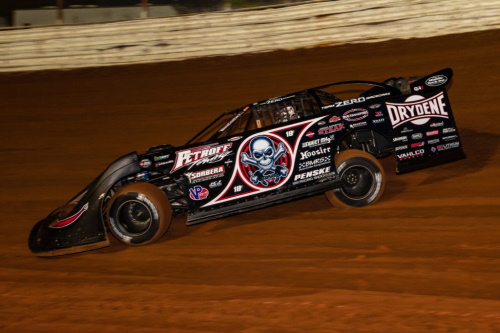 Racing at his home track for the first time in years, Scott Bloomquist had a solid weekend as the only driver with a top five finish both nights. (Michael Boggs Photo)

Hometown hero Scott Bloomquist from Mooresburg completed his weekend at the Bulls Gap track with two top five finishes in his pocket after a fourth-place effort on Saturday for the Team Drydene No. 0. Brandon Overton of Evans, Ga. finalized the top five just one night after an ignition failure took his Wells Motorsports No. 76 Longhorn Chassis out of the lead.

The World of Outlaws Morton Buildings Late Model Series is back in action next week with the $30,000-to-win, $1,000-to-start Firecracker happening at Lernerville Speedway in Sarver, Pa. from Thursday-Saturday, June 25-27, with Saturday’s main event airing LIVE on CBS Sports Network. More information on the crown jewel event can be found HERE.