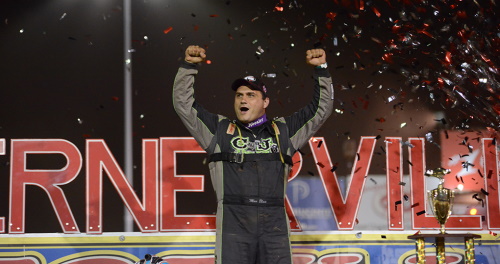 SARVER, PA. (June 26, 2020) – It’s only fitting that we kicked off the 14th rendition of the Firecracker with some jaw-dropping fireworks on Thursday night at Lernerville Speedway.

After Sheppard snookered Blair with the help of lap traffic out of turn two and down the backstretch on lap 24, the Rocket1 Racing No. 1 assumed the point and went into the final corners with a last-lap win in mind. However, as Sheppard backed it down and then clipped the turn three inside berm, Blair couldn’t adjust fast enough and the cars collided. Sheppard went spinning. The crowd went crazy. 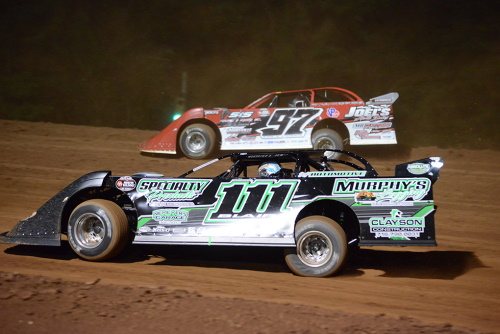 “Next to my dad, there is nobody in this sport that I respect more than Mark Richards and Brandon Sheppard,” Blair stated on the last-lap contact. “I hate that that happened. I got bottled up behind those lap cars and didn’t know where to go. I should’ve never got under him, I knew better than that. Brandon passed me and then he slowed down just way, way, way more than I was anticipating. I was trying to get by the lap car and back up the track to give myself a run. I know I definitely got into him and I feel terrible about it. Mark and Rocket are a big, big part of my program. I’ll go talk to them and apologize.”

Before Blair and Sheppard’s last-lap duel lit up Lernerville Speedway and created social media waves, Thursday’s opening program of the Firecracker started with a monster field of 48 World of Outlaws Morton Buildings Late Models in the pit area. After two flights of qualifying, six Drydene heat races, and three Last Chance Showdown’s, the 25-lap preliminary feature was brought to life by World of Outlaws contender, Cade Dillard of Robeline, La. in his MB Customs No. 97, and local hero, Mike Norris of Sarver, Pa. in his own No. 72.

From the jump, Dillard quickly commanded the field on the low side while Norris elected to tread the tricky trail up top. A lap two red flag was the first of two stoppages in the 25-lapper when a turn two pileup sent Darrell Lanigan, Dennis Erb Jr., Rick Eckert and Brent Larson all to the work area.

Going back green, Dillard had a new PA Posse standout to deal with as Blair of Centerville, Pa. dished away the Sarver native, Norris, to take the second spot. As the race ran to halfway and lap traffic came into play, the battle up front tightened with nearly five-cars of Dillard, Blair, Norris and then Brandon Sheppard of New Berlin, Ill. and Scott Bloomquist of Mooresburg, Tenn. all under a blanket.

Making it a side-by-side affair for the lead on lap 15, Dillard and Blair went toe-to-toe for the top spot as the feature hit ten to go. Behind those two was a fast and furious “Rocket Shepp,” who moved into the third spot when Norris slipped off the edge of turn two on lap 16. While Sheppard tracked those two down, he witnessed Blair find the outside and rip right around Dillard to assume the lead on lap 18. Once Blair disposed of Dillard, however, his challenge was only beginning; as Sheppard was coming, and coming fast in the closing laps. 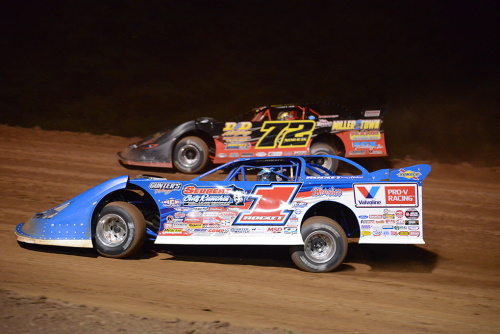 Brandon Sheppard (1) powers by Mike Norris (72) on his way to the front of the field. (Jason Shank Photo)

Reaching him just as the white flag waved, Sheppard set Blair up for a last-lap pass. Picking him off between the lappers of Dennis Erb Jr and Brent Larson in turns one and two, Sheppard turned the Rocket/Durham No. 1 off the banking off turn two and cut underneath Blair to take the lead down the backstretch. It all went wrong in turn three though. Slowing down to hit the bottom, Blair misjudged the corner behind Sheppard and ran into the back of the No. 1, spinning him around and causing a caution.

“I got a good run off turn four coming to the white flag when I got under Dennis [Erb Jr.],” explained Blair on the last lap. “I thought if I could get beside him to where he could see me that he would give me room, but I didn’t get far enough up. I was gonna pass him, but then I slid up, and stuff got ugly for a straightaway. Like I said, I feel terrible about what happened in turn three.”

“These races are tough to come by, especially here,” Blair commented on the big win. “This one means the world to me. It’s just a huge confidence booster. We tried a few different things on the car for the feature after I drew a bad pill. I don’t know how close those guys were when I got by Dillard and before I hit lap traffic, but I felt like we were really good.”

Chasing Blair to the stripe and earning his second podium result in as many weeks was “Thriller” Cade Dillard aboard the MB Customs No. 97. The Robeline, La. native led the opening 17 laps from the pole position and learned plenty about the Sarver, Pa. 4/10th-mile on Thursday night.

“We weren’t the best there at the end, we’re gonna have to work on that,” noted Dillard on his car’s transition. “I got more conservative there at the end. The top was probably better in turns one and two, but it just got thin and a couple of times I caught a push. I probably should’ve gave it a little more and took a chance at winning, but it was a good points night. It was definitely better than where we were at here last year. We’re building on that. Hopefully after two more days we can build up that notebook and figure out what we need. These guys have a lot of experience here and this is just our second time at this place.” 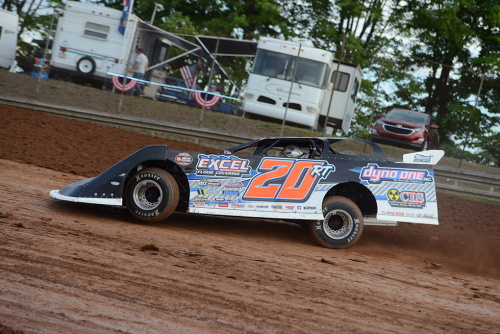 Completing the podium behind Blair and Dillard was a hard-charging Ricky Thornton Jr. in third-from-21st. Coming from the Last Chance Showdown, the Chandler, Ariz. native wheeled the SSI Motorsports No. 20RT Longhorn/Clements everywhere the track allowed him on his march to the front of the field. He capped the feature with a power move on the final restart that launched him from fifth-to-third in one lap.

“We took out time there at the beginning when I was just rolling around the bottom, but then I let it all hang out and moved up to the top,” Thornton said on his race. “We were really good. I’m super excited for the rest of the weekend!”

Rounding out the top five on Thursday night at the Firecracker was Scott Bloomquist with his third-straight top five finish and Chase Junghans of Manhattan, Kans. with a fifth-place effort for his Rocket/Clements No. 18.

Closing out the top ten at Lernerville was “Chubzilla” Chub Frank, Rookie of the Year leader Ashton Winger, York Have, Pa. native Jason Covert, Mason Zeigler from 19th, and Mike Norris after starting on the outside pole.

The World of Outlaws Morton Buildings Late Model Series is back at Lernerville Speedway in Sarver, Pa. tomorrow Friday, June 26 for night two of the 14th rendition of the Firecracker. Tickets are available for purchase at the gate or fans can watch from home LIVE on DIRTVision. Saturday’s 50-lap, $30,000-to-win finale is set to be simulcast LIVE on CBS Sports Network at 9:00pm ET. 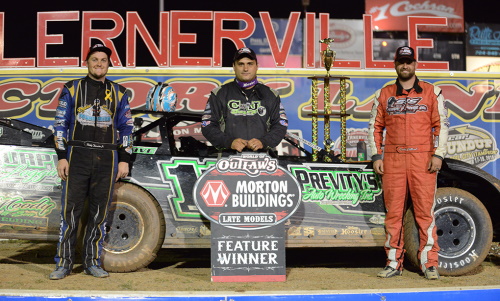