JACKSON, MN (June 27, 2020) – Aside from the medal around his neck and a few drops of sweat sliding down his face, you’d never be able to tell Logan Schuchart just endured a six-hour marathon.

The Hanover, PA driver not only survived a double World of Outlaws NOS Energy Drink Sprint Car Series Feature night at the 4/10-mile Jackson Motorplex on Friday, he ended the night as the top driver. 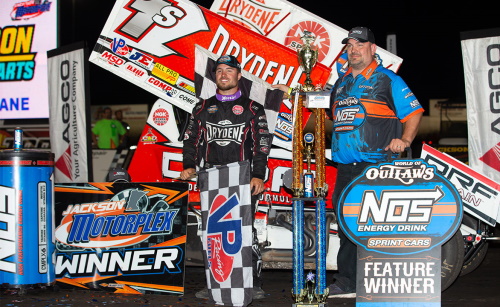 “It feels good,” said Schuchart about his point lead in the crown jewel event. “With the different format you never know if you should sandbag or try to start on the pole. That’s a tough equation to figure that out. You see some cars miss it when they try and do that. We tried to go as fast as we could every time we hit the racetrack. It’s paid off for us. We’re going to be up front in this thing.”

He picked up valuable points throughout the night with runner-up finishes in his Drydene Heat Race and the DIRTVision Fast Pass Dash – placing him on the outside pole for the Feature.

When the green flag waved to start the 25-lap event, Schuchart got a bad start, allowing polesitter Jason Sides to pull away and Daryn Pittman to sneak underneath him. He saw an opening to charge back around both of them off Turn 2, though. While riding the high side of the track, Schuchart ran both of them down by the center of the corner. However, the opening he saw closed when Sides slid up the track and blocked his lane. Sides’ mistake allowed Pittman to dart out front.

Schuchart made his way by Sides shortly after and began to hunt Pittman down. He could inch closer to the Roth Enterprises #83 car every lap, but never enough to the point where he could make a run at Pittman. The two cars were about equal in speed.

That changed on Lap 9 when Pittman slid off Turn 2 while trying to pass a slower car and allowed Schuchart bolt by him for the lead. From then on, there was nothing Pittman could do. The Drydene #1S quickly put about a straightaway distance between them and continued to grow it every lap.

Pittman and third-place Brad Sweet, who won round one early in the day, were left to try and maintain their podium positions.

When Schuchart crossed the finish line, he had a 4.7 sec. lead over Pittman.

“I was a little worried at the beginning because Daryn is always fast here with the 83 team, where it here at Jackson or a big track or a little track. They’re always fast,” Schuchart said. “But we were able to get by there in lap traffic. It just seemed like lap cars, when I get up to them, it seemed like they were racing with each other and I was able to get by them at the right time.”

For Pittman, the runner-up finish is a welcomed solid run for he and his Roth Motorsports team, who are building momentum with a top-five at Tri-State Speedway last weekend and now a top-10 and runner-up finish at Jackson Motorplex.

“We just keep working on our car,” Pittman said. “I’m happy with the direction we’re going. Brent, Tony, Steven, they’ve been working their butts off. Not a lot of good results to show for it. Hopefully we’re turning the corner, getting a little bit better and continue to finish up front.”

(AGCO Jackson Nationals points after rounds one and two)

The World of Outlaws NOS Energy Drink Sprint Car Series returns to Jackson Motorplex for the conclusion of the 42nd Annual AGCO Jackson Nationals Saturday night with $30,000-to-win on the line.

You can watch all of the action live on DIRTVision. 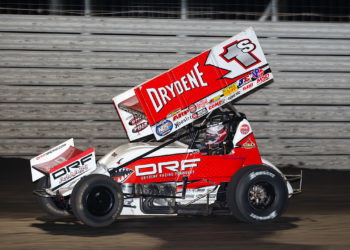