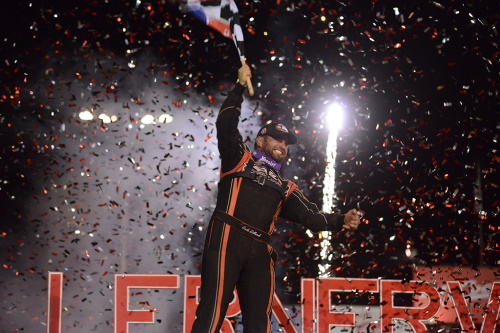 Leading every lap of the 14th annual Firecracker, the Robeline, La. native picked up the biggest win of his blossoming career at Lernerville Speedway. Showing up with big money on the line, Dillard has now won $15,000 and $30,000 in his two career victories with the World of Outlaws Morton Buildings Late Model Series. 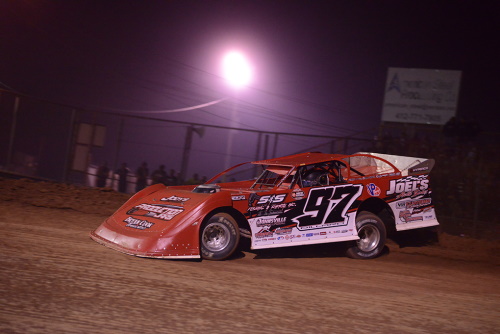 Dillard never finished outside the top five all weekend with preliminary finishes of 2nd & 4th followed by the Firecracker title on Saturday. (Jason Shank Photo)

“This is unreal,” Dillard exclaimed in victory lane. “I really don’t know what to say right now. This whole deal is a dream come true. I never in a million years thought that something like this could happen to me.”

Already one of the weekend’s top performers, Dillard entered Saturday’s finale with preliminary finishes of second on Thursday and fourth on Friday, earning him the pole position of a Team Drydene heat race. From there, he ran off with the ten-lapper and joined Scott Bloomquist, Darrell Lanigan and Mike Norris in the Morton Buildings redraw. However, the crown jewel drama was brewing when Bloomquist’s No. 0 was found with an illegal part in post-race tech, DQ’ing him.

Pulling the lucky one pill, Dillard drew the pole position with Mike Norris of Sarver, Pa. to his outside. Once the green flag dropped, the route was on. While Dillard saw a handful of legitimate challenges from Darrell Lanigan and Max Blair, the control that the MB Customs No. 97 had on the race lead was never seriously questioned.

“I didn’t want to see those cautions, that’s for sure,” Dillard noted. “I felt like I got in a good rhythm before that last one and it just seemed like they kept coming and coming. I don’t know how, but somehow I was able to stay fairly calm.”

Going side-by-side with Lanigan on a few occasions around the mid-point of the 50-lapper, Dillard only stepped up his game with each challenge. Keeping his cool with big money on the line, Saturday’s race along with his $15,000 January triumph at Vado, continue to serve as the turning point of Dillard’s crown jewel career.

“I’ve given some of these big races away by just not being good enough at the end,” stated a relieved Dillard. “The USA Nationals last year is still a hard pill to swallow, because we were so good for so long.”Everybody has worked so hard to get to this point, and I know we’ve still got a long way to go. This is all pretty humbling though. I can’t believe everything I’ve been blessed with over the years. 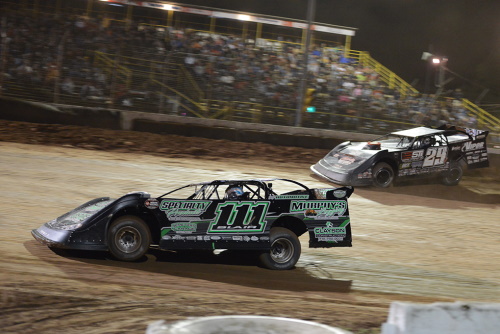 After going back-and-forth all race long, Max Blair of Centerville, Pa. ended up with a runner-up result as the highest-finishing Pennsylvanian in the 2020 Firecracker. Even after his third-career World of Outlaws Morton Buildings Late Model Series win on Thursday and a second-place effort tonight, the results are still surprising to the humble driver of the Rocket Chassis No. 111.

“I can’t believe how competitive we were all weekend,” said Blair. “I don’t get to race against these guys often, let alone be this competitive with them when I do. It’s a lot of fun. I hate how Thursday night ended still, but I’m excited for a second tonight. I didn’t have anything for the 97 and honestly I didn’t have anything for Lanigan either, but he got over the cushion there and I was able to sneak by him. 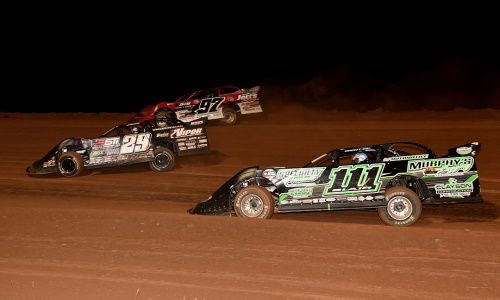 Limited fans at the track and those watching on DIRTVision were treated to excellent racing all three nights. (Paul Arch Photo)

Rounding out the podium after running second for most of the 50-lapper was Darrell Lanigan of Union, Ky. aboard his Barry Wright Race Cars No. 29V. His stellar success at the Firecracker continued with Saturday marking his eighth top five in the Pennsylvania crown jewel.

“I thought we might’ve had something for Cade early on, but man he never messed up,” Lanigan thought. “I’ve always loved coming here though. We always seem to run good here, so maybe next years we’ll get that win again.

The World of Outlaws Morton Buildings Late Model Series will resume their 2020 season next weekend with an Independence Day Spectacular at Wisconsin’s Cedar Lake Speedway on Thursday-Saturday, July 2-3-4. Racing alongside the World of Outlaws NOS Energy Drink Sprint Car Series, both divisions will come together for an epic three-day showdown with full fans in attendance. Thursday’s program will serve as qualifying with Friday and Saturday both offering $20,000-to-win, $1,000-to-start features. Saturday’s finale is scheduled to air LIVE on CBS Sports Network. 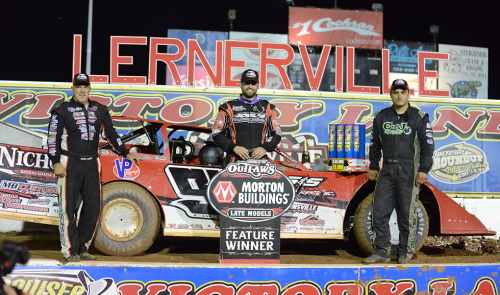