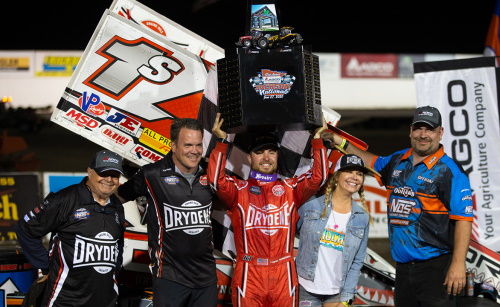 JACKSON, MN (June 28, 2020) – Crown jewels dangled in front of Logan Schuchart throughout 2019 but were never close enough for him to grab.

On Saturday night at the Jackson Motorplex, Schuchart fended off an assault of slide jobs and dive bombs throughout the 35-lap Feature to finally grab a crown jewel. He claimed the 42nd Annual Jackson Nationals title and the $30,000 prize that came with it. 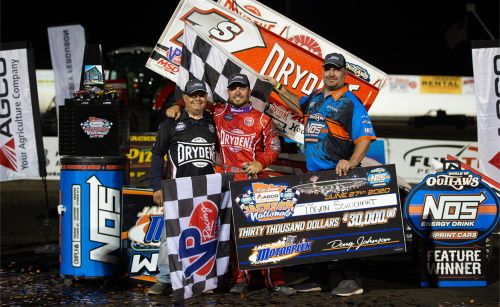 “It’s awesome,” Schuchart said about winning the AGCO Jackson Nationals. “We’ve been so close to a couple of them (crown jewel events). It’s a huge win. Great for our team, without even thinking about the money. To win a race like this at a great facility with all of these great names here. To be able to win during these trying times in 2020 with everything that’s going on and to get a big win is great for our team.”

The win is his fourth of the season – second in a row at the 4/10-mile track – and 20th career World of Outlaws NOS Energy Drink Sprint Car Series win.

The Hanover, PA driver entered the night as the points leader with his Shark Racing team for the event after a fourth-place finish and a win in the preliminary races.

He finished second in the DIRTVision Fast Pass King of the Hill Dash behind winner Daryn Pittman, placing them on the front row of the 35-lap Feature.

Schuchart darted ahead of Pittman at the start of the Feature, bringing two-time and defending Jackson Nationals champion Brad Sweet and Sheldon Haudenschild along with him. The next 30 laps became a summer blockbuster worthy of an Oscar nomination.

The lead officially changed hand six times throughout the event – not counting every time Schuchart, Sweet and Haudenschild swapped the lead before crossing the finish line. Haudenschild stole the lead from Schuchart in lap traffic on Lap 10. However, a red flag for Parker Price-Miller’s flip in Turn 1 put Haudenschild and Schuchart side by side on the restart.

Unwilling to lose another crown jewel event, Schuchart timed the restart perfect and powered his way around the outside of Haudenschild to reclaim the lead. But Haudenschild, who is winless this year, was just as hungry for the victory. He charged his way back around Schuchart the next lap.

Their duel of the fates was not yet over. Schuchart threw a slide job on Haudenschild going into Turn 1 and reclaimed the lead on Lap Lap 13. And this time, he was able to pull away, running the high line. Haudenschild fell victim to Sweet, as well.

With Schuchart in the lead, Sweet second and Haudenschild third, the three drivers ran single file around the top of the track for about the next 10 laps.

Once the Feature was under 10 laps to go and Schuchart again caught slower traffic, Sweet and Haudenschild closed in.

Like fighter jets playing war games, seeing how close they can dive around each other without touching, the three drivers swapped lanes every corner to try and get an advantage on the other. Haudenschild and Sweet almost made contact exiting Turn 4, forcing Haudenschild over the cushion with eight laps to go. He faded to the clutches of Pittman, while Sweet went after Schuchart.

“The Big Cat” pounced on Schuchart and edged him for the lead on Lap 29, but Schuchart dove into Turn 1 and slid ahead of Sweet for the final time. With tires wearing down, the reigning Series champion had nothing more for Schuchart. The Drydene #1S drove away with one of the biggest wins in his career. 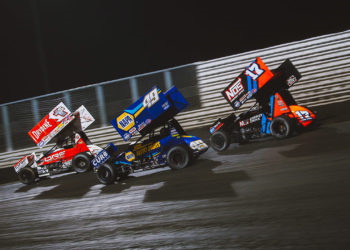 “It’s tough when you get guys like that, that are so good,” Schuchart said about having to race Sweet and Haudenschild for the win. “Sheldon is going to pound the top down and take his shots. He can pull a slider from way far away. And I knew Brad was going to be coming at the end. You just have to keep your composure with those guys. You just have to hit your marks and not get overly excited.”

Sweet finished on the podium all three nights of the 2020 AGCO Jackson Nationals, including a win on the first night. However, he had to settle for another runner-up finish with his Kasey Kahne Racing team.

“I went really hard there in the middle of the race and kind of used my one shot to get by Logan and didn’t make it stick,” said Sweet, of Grass Valley, CA. “He did a good job. I think he was able to set a nice pace out front and able to save his tires, while I tried to stay close.

“There’s some nights you just can’t get it done. NAPA Auto Parts guys gave me a good car. We’re working hard. It’s competitive out here right now. We’ll take a second and try to get better next week.”

Pittman was able to get around Haudenschild to finish third – his second podium finish in a row.

“We just got some work to do and got beat by, arguably, the two best cars on the tour this year,” said Pittman, of Owasso, OK. “We’re making gains.”

Ten-time Series champion and 2018 Jackson Nationals champion Donny Schatz ended the night eighth – his second top-10 finish in a row with his Tony Stewart/Curb-Agajanian Racing team after four straight races outside the top-10.

Carson Macedo earned the KSE Racing Hard Charger award in his Kyle Larson Racing #2 car with his run from 18th to ninth. He’s now tied with Schuchart for the second most top-10 finishes, so far, this season with 14.

Now, with a crown jewel win under his beat, Schuchart said it only gives he and his team more confidence going forward this year.

You can get tickets to the three days of racing by clicking here.

If you can’t make it to the event, all three nights will be broadcast live on DIRTVision, as well.