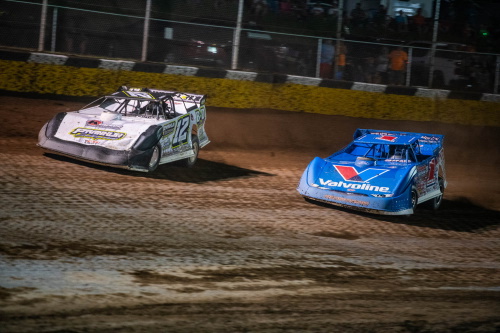 The 20-year old Rookie of the Year leader out-dueled the best in the business to earn one of the most hard-fought first career victories you’d ever see. Navigating lap traffic, trading sliders, and going wheel-to-wheel with $20,000 on the line, the young Hampton, Ga. native never cracked once with Brandon Sheppard’s Rocket1 Racing No. 1 breathing down his neck; if anything, Winger cranked it up in pressure time.

A misleading box score has Winger’s Franklin Enterprises No. 12 Rocket XR-1 leading every one of the 40 laps around the Cedar Lake 3/8th-mile, but it was anything but a wire-to-wire score on Friday night. Dealing with Sheppard’s immense presence over the final half of the race, Winger was up to the challenge time-and-time again. Withstanding a lap 37 slider, Winger went right back at B-Shep into turn three with his own massive slide job to retain the top spot. A position would furiously hang on to score an emotional first career World of Outlaws Morton Buildings Late Model Series feature win. 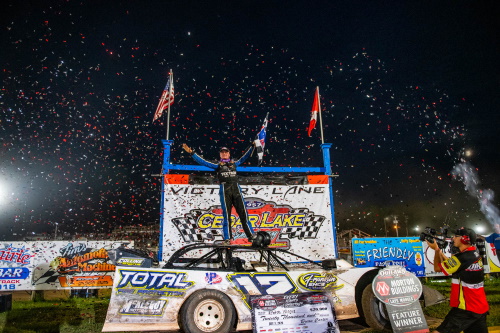 “This is so awesome man,” Winger shouted in victory lane. “This is all I’ve ever wanted to do. I never wanted to NASCAR or anything like that. I always wanted to be at the top level of the Dirt Late Model Racing and here we are. I’m so glad we got to do this in front of a full crowd. This is so badass! I’m speechless.”

Before Friday’s show thrilled a standing-room only crowd at Cedar Lake Speedway, fans entered the facility through state-of-the-art COVID-19 screening procedures. Once the action began though, a trio of heat races, a last chance showdown, and the 40-lap Morton Buildings feature accompanied an entire program for the World of Outlaws NOS Energy Drink Sprint Car Series.

Creating a pair of polar opposites on the front row of the 40-lapper, the Morton Buildings Feature Redraw gave fans 20-year old Ashton Winger vs. 50-year old Darrell Lanigan starting pole and outside pole. Running off to a steady advantage through lap 15, Winger’s challenge began on lap 16 when sixth-starter Brandon Sheppard overtook Lanigan for the runner-up spot. Reaching the cross flags on lap 20, the battle for the lead heated up as Sheppard applied pressure on Winger.

Stalking him over the final ten laps, a side-by-side affair with seven laps left brought the fans to life as Winger had Sheppard hounding him for a win that was worth $20,000. On the 37th circuit, with just three to go, Sheppard launched a turn one slider and cleared Winger for the top spot, but the 20-year old kid wasn’t done, nowhere close.

Winger came firing back down the backstretch and tossed his own turn three slider at Sheppard, retaking command of the lead as they saw the two-to-go signal. Over the final two laps, Winger ran the race of his life and held off Sheppard for a huge first career World of Outlaws Morton Buildings Late Model Series feature win. What followed was an emotional victory lane which sent the Cedar Lake Speedway crowd crazy.

“Sheppy was showing me a nose that whole time and this race track moved around so much that I just didn’t know where to be,” noted Winger. “This is a dream come true. I have to thank so many people: my mom, my dad, Billy Franklin, Colby, Todd Pruett, everybody who has ever turned a wrench on any of my race cars since I was nine years old. This is all for them. I’m so thankful.” 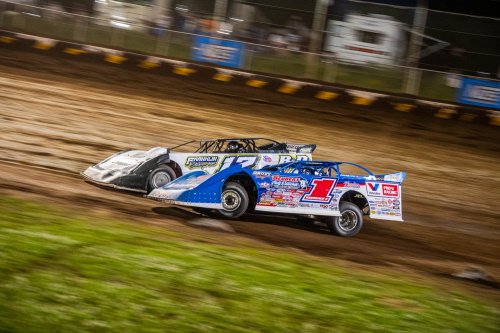 Falling short of stealing the win in the closing laps, Brandon Sheppard of New Berlin, Ill. ended up with a second-place finish in Friday’s show aboard the Rocket1 Racing, Valvoline No. 1. That makes 16 top ten finishes in 17 races this season for “The Rocket Shepp,” who again extended his points lead over Ricky Weiss in pursuit of his third-career World of Outlaws Morton Buildings Late Model Series championship.

“He did a really great job, congrats to those guys,” Sheppard said afterwards. “They’ve been working hard out on the road with us and they deserve this. We were right there with them and had a great car all night, just missed it there at the end. Hats off to all my guys Mark, Dan, Austin, Joel, Steve Baker, Rocket Chassis. This thing is so good right now. It means the world to me to be standing up here on the top three night-in and night-out with these guys. I’m excited for tomorrow. Thank you to all the fans for coming out!”

Rounding out Friday’s podium was a sneaky good Ricky Weiss in his Dryden Performance Products No. 7 machine. Chasing Winger and Sheppard down, Weiss made it a three-way war in the closing laps, but simply ran out of time. Still, however, a strong third-place bid put the Headingley, Man. native back into the top five for the first time in over a month with the World of Outlaws Late Model Series.

“I think we had a really good car and I think we had a real shot at winning it there,” Weiss thought after the feature. “Maybe if a caution could’ve came out or the cards just played differently, we could’ve got them. I’m just happy to be here standing on the podium. Proud of my team for a good showing after last night. It’s so awesome to see Ashton get his first career win. Hopefully that’s us up there tomorrow night.”

Closing out the top five in Friday’s program at Cedar Lake Speedway was Dennis Erb Jr. in fourth and Darrell Lanigan in fifth, who continue to offer a pair of resurgent mid-season campaigns. Concluding the top ten in the 40-lapper was Jimmy Mars of Menomonie, Wisc., Scott Bloomquist in his Drydene No. 0, Frank Heckenast Jr. of Frankfort, Ill., Thursday’s Elimination Showdown winner Cade Dillard in the No. 97, and Chase Junghans with a tenth-place score in the No. 18.

The World of Outlaws Morton Buildings Late Model Series is back at New Richmond, Wisconsin’s Cedar Lake Speedway on Saturday, July 4 for an Independence Day Shootout with the World of Outlaws NOS Energy Drink Sprint Car Series. Both of dirt racing’s premier divisions will compete for $20,000-to-win, $1,000-to-start features that will air LIVE on CBS Sports Network at 9:00pm ET.