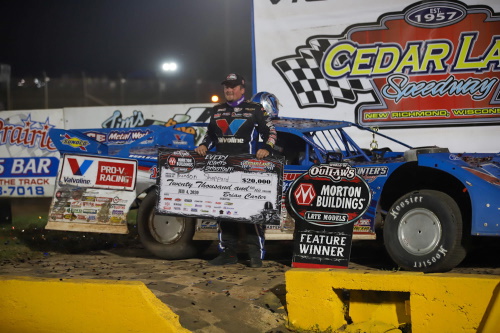 NEW RICHMOND, WISC. (July 5, 2020) – With the bright lights of national television shining on the World of Outlaws Morton Buildings Late Model Series, Brandon Sheppard stepped up to the plate and knocked a home run out of the park.

Leading 39 of the 40 laps on Saturday night, Sheppard of New Berlin, Ill. rocketed away from Cade Dillard on the second circuit and never looked back en route to his fourth career World of Outlaws win at Cedar Lake Speedway. Marking his sixth victory of the 2020 season, Sheppard’s latest triumph aboard the Rocket1 Racing, Valvoline No. 1 came with a cool $20,000 payday that he earned LIVE on CBS Sports Network.

However, Saturday’s triumph for Sheppard didn’t come without a little saving grace for “The Rocket Shepp.” After Dillard of Robeline, La. led the opening lap with his high-side momentum, Sheppard rallied on the bottom to narrowly lead the second trip around the New Richmond, Wisc. 3/8th-mile. On lap three though, Cade stormed right around B-Shepp and secured command of the top spot only for the caution to fly and negate his pass for the lead. The lap two red flag for a flipped Boom Briggs was the only stoppage of the 40-lapper on Saturday night. Boom was okay and even joked after climbing out, “Get my car back to the trailer okay, I’m going to have a beer.” 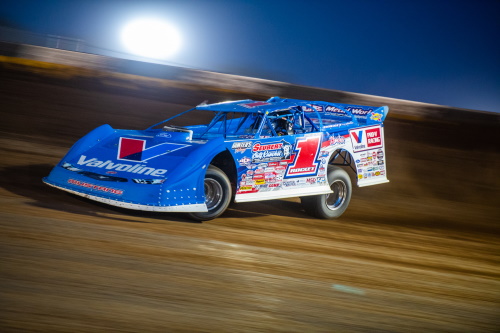 B-Shepp led the final 39 of 40 laps for his sixth World of Outlaws win of the season on Saturday night. (Jacy Norgaard Photo)

“We really got luck there at the beginning of the race when that caution came out,” Sheppard admitted in victory lane. “The bottom was still a little slimy and Cade was able to get a better start than I was. Luckily, I barely got him when we crossed the line on that second lap. I seen that Boom’s car got tore up and I hate that for him, but man that caution really helped me.”

As lucky as the stoppage served him, Sheppard still had to grind it out over the final 38 laps on a tricky track with Dillard following his every move throughout lap traffic. Dillard’s MB Customs No. 97 kept Shepard honest on a handful of occasions making it a close battle for the lead, but couldn’t find the momentum to overtake the defending World of Outlaws Morton Buildings Late Model Series champion.

“About halfway through I felty really good, especially through the center where I felt like I was making up some ground on him,” Dillard said afterwards. “I just couldn’t get through that hole in turn three the longer race went on. We got to him at one point, but he just wasn’t going to make any mistakes to give us a chance. Congrats to him and that team, it’s fun racing with those guys. I’ll echo what he said, it’s an honor to just be up here on this stage and consistently at that. It took me a long time to get to the point, so this is really nice. It’s awesome to come to a facility like this with all you fans.”

Speaking of the fans, Cedar Lake Speedway hosted a packed house throughout 4th-of-July weekend with state-of-the-art COVID-19 screening procedures used at the arrival of the facility. Along with the crowd at hand, thousands at home were able to watch the World of Outlaws Morton Buildings Late Models AND World of Outlaws NOS Energy Drink Sprint Cars not only on DIRTVision, but LIVE on CBS Sports Network as well.

Much like Dillard, Sheppard revels in the fact that he’s standing at the top of Dirt Late Model Racing on a nightly basis, and it humbles him

“Cade has been really tough, Ricky has been really tough, everyone we race with out here on the World of Outlaws makes for tough competition night in and night out,” Sheppard, the defending champion, stated. “To be as consistent as we are against this type of talent is pretty special. Between Cade, Ricky, myself, and the rest of the bunch, we race each other so clean, but really hard as well. It’s unbelievable to be standing up here and on CBS at that, that’s really awesome and great for our sport. Thanks to all you fans for coming out and supporting us, this is a great crowd.” 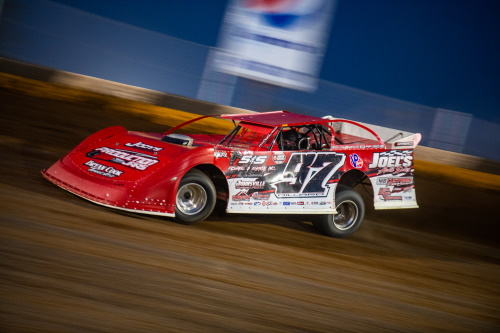 After winning the $30,000 Firecracker last weekend, Dillard was again a threat in this weekend’s big show. (Jacy Norgaard Photo)

After leading the opening lap, a second-place finish was the story for Cade Dillard and his MB Customs No. 97 entry. It wasn’t the $20,000 win they wanted, but it kept Cade’s hot streak of five straight top ten finishes alive and supplanted more momentum for a team on the rise.

“I’ve learned to be so much more patient over this past year,” Dillard noted about his progression. “Around 10 or 15 laps left I was closing on him in lap traffic and probably was a little too patient this time. It was just getting so thin up there on the cushion that you could really tear a race car up. It’s a hard act to balance while you’re trying to win the race, but you’re trying to finish in general too.”

Closing out the podium on Saturday was Ricky Weiss of Headingley, Man. for the second-straight night with a third-place finish. After going five straight races without a top five finish, Weiss and his Drydene Performance Products No. 7 walk out of Cedar Lake Speedway this weekend with some regained confidence after a pair of podium appearances.

“This has been a really great weekend for Team Drydene, I’m proud to be supported by those guys all year long,” Weiss said. “It’s cool we got to race on CBS Sports Network for them tonight and race in front of this great crowd too. Overall a solid weekend for us.” 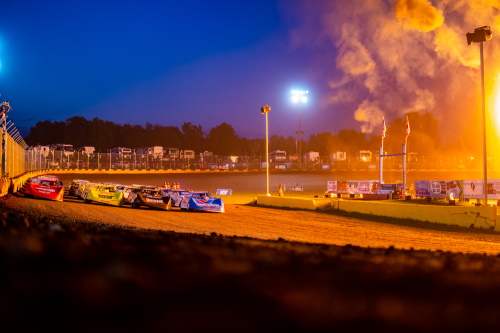 The whole weekend at Cedar Lake, let alone Saturday, was a historic one for the World of Outlaws. (Jacy Norgaard Photo)

Rounding out the top five was Dennis Erb Jr. in his Rocket XR-1 No. 28 and Jimmy Mars in his MB Customs No. 28M. Concluding the top ten at Cedar Lake Speedway was Scott Bloomquist in the Drydene No. 0, Chase Junghans in his own No. 18 machine, Frank Heckenast Jr. of Frankfort, Ill., Darrell Lanigan in his Barry Wright Race Cars No. 29V, and Friday’s first-time winner Ashton Winger.
Up next for the World of Outlaws Morton Buildings Late Model Series is another Wisconsin doubleheader next weekend. On Friday, July 10, the Late Models head for Outagamie Speedway in Seymour, Wisc. followed by a Saturday, July 11 trip to the Plymouth Dirt Track in Plymouth, Wisc.