SUNNYVALE, Calif. (July 7, 2020) – Following the industry-wide pause in its racing schedule due to the COVID-19 pandemic, CrowdStrike Racing returns to competition this week as SRO America and GT World Challenge America powered by AWS. It will be the second of six events on the season with CrowdStrike reaffirming its full-season commitment as an entrant and official sponsor of GT World Challenge.

Virginia International Raceway (VIR) is the site of the program’s first motorsports event in more than four months. The SRO weekend will take place with CrowdStrike Racing and all series participants supporting and adhering to strict local, state and federal guidelines on medical screening, social distancing and use of personal protective equipment (PPE).

The CrowdStrike Racing effort returns to VIR in force with a trio of race cars in two different SRO America series and three classes. Hopes are high following a stellar opening to the 2020 season at Circuit of The Americas in Austin during early March, when CrowdStrike Racing claimed three podium finishes to start the year.

It marked a successful beginning of 2020 for CrowdStrike, which also is the Official Internet & Cloud Security Provider for GT World Challenge. The program’s unique activation and hospitality events will resume with the series’ next race in August at Sonoma Raceway – an event which is sponsored by CrowdStrike. 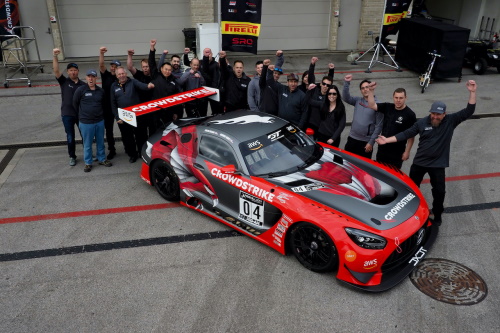 In the two main races of the VIR weekend, George Kurtz and Colin Braun seek to continue their trophy-winning momentum following a double-podium weekend to start the season at COTA. Driving the No. 04 CrowdStrike Racing AWS/Accel/DXDT Racing Mercedes-AMG GT3, the pairing claimed two second-place finishes thanks to impressive drives by the two teammates.

The results place them second in the GT Drivers’ Championship as the series resumes its season with live coverage on CBS Sports Network – 1:30 p.m. ET on Saturday and 1 p.m. ET on Sunday. Of note, the VIR weekend will be held behind “closed doors” with no spectators to meet state health and safety guidelines for professional sporting events.

“It goes without saying that we are happy to be back racing at VIR in GT World Challenge powered by AWS,” Kurtz said. “We’re supportive of the decisions and timelines set out by series leadership to get us all back on track in the quickest and safest manner possible. Colin and I enjoyed a great weekend with two podium finishes at COTA to start the season, and we hope to deliver again at VIR for the supporters of CrowdStrike, AWS, Accel, SINET, and Mercedes-AMG.”

Kurtz and Braun claimed their first GT World Challenge podium together in 2019 at VIR – a second-place showing in the weekend’s second 90-minute race. With that experience plus a number of technical enhancements on the Mercedes-AMG GT3 for 2020, the CrowdStrike Racing team feels confident for one spot better this year.

“There were a lot of positives that we took away from COTA with the updated CrowdStrike/DXDT Mercedes-AMG GT3,” Braun said. “We look forward to adding to those at VIR, which is a great challenge but one of my favorite tracks on the schedule. VIR has so many fast and flowing corners it’s thrilling to get right but easy to make some small mistakes that cost big lap time! We were proud to be on the podium last year, but grabbing that first win for George, myself and everyone at DXDT Racing and CrowdStrike would be very special.” 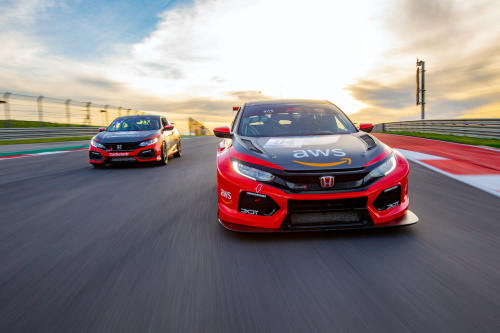 In addition to its championship-contending GT program, CrowdStrike will resume its first-year Touring Car program at VIR with three 40-minute races all streamed online by TC America. CJ Moses (TCR) and Kevin Boehm (TCA) made their debuts in the category at Circuit of The Americas and came away with positive results despite new equipment and new competition. While results are important, there also is the benefit of additional business networking opportunities in the fast-growing TC America paddock for CrowdStrike.

Moses and Boehm each will pilot CrowdStrike Racing Honda Performance Development (HPD) Civics in TC America’s pair of 40-minute races around the 3.27-mile, 17-turn road course on the border of Virginia and North Carolina. Moses will drive the No. 04 CrowdStrike/AWS/DXDT Racing HPD Type R TCR with Boehm in the No. 9 CrowdStrike/AWS/DXDT HPD Civic Si.

For Moses, a return to VIR is a sort of homecoming. A former driving instructor at the track, he enjoyed one of his best weekends of 2019 at VIR a year ago with a second-place podium finish in GT4 SprintX competition in a CrowdStrike Racing entry. Armed with that success and the 2020 TC opener at Circuit of The Americas, Moses feels confident heading to VIR. 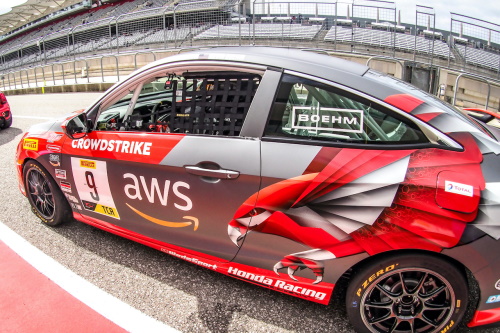 “I learned a lot at COTA,” Moses said. “That’s the biggest part of racing at this level. It takes a bit to learn new cars, new tracks and new competitors. Fortunately, the learning is coming quickly with the CrowdStrike/AWS HPD Civic Type R TCR. I feel like we had a very solid weekend in Austin. There is a lot of data that tools from AWS has helped us digest in preparation for VIR. With those findings and the experience from last year, I’m sure we will be quickly up to speed.”

Boehm, in his first year as part of CrowdStrike Racing, looks to continue his good start to 2020 that began with a pair of podium finishes at Circuit of The Americas. He also was one of the front-runners in GT World Challenge’s GT Rivals e-racing series in the weeks during the pandemic.

“We are fortunate to be able to have this TC America event at VIR,” Boehm said. “I can’t wait to get back on track with the rest of the CrowdStrike Racing team. It’s been a challenging few months and I hope we can bring some excitement and entertainment to our fans at this race. Even though I have a lot of experience at VIR, I do not take preparation for it lightly. I know that small adjustments to my driving and to the car can add up to big improvements on track so I will not let any time go to waste on or off track.”

While the excitement has built for a return to competition, so has it for CrowdStrike’s home race in August at Sonoma Raceway. Sponsored by CrowdStrike, the SRO America weekend in Northern California will take on a different look for CrowdStrike and its guests. Plans are underway for virtual in-race entertainment and interactive events that will allow for greater participation from those away from the track.

The goal is still the same: showcase to competitors and guests alike the wide array of methods that CrowdStrike protects and promotes its involvement in SRO.

To start, CrowdStrike is on the front lines of cyber protection with its Falcon platform to secure all data generated and stored by SRO.

Additionally, CrowdStrike VIPs and guests will continue to enjoy new and exciting ways of interacting with each other and the racing program once at Sonoma Raceway. That includes presentations by CrowdStrike leadership and industry thought leaders and Q&A with CrowdStrike Racing team members and drivers.

As the racing season is effectively re-launched, so too is CrowdStrike Racing’s online brand presence. The new website, crowdstrikeracing.com, offers fans, staff, and partners a richly immersive experience with new videos, dedicated event pages, and links to stream live SRO races right from the website. More photos, press releases, and features will be added throughout the race season.

First things first, however. The GT World Challenge Powered by AWS and TC America championships will resume their seasons at Virginia International Raceway on July 9-12. For more information on the series, visit the new crowdstrikeracing.com.