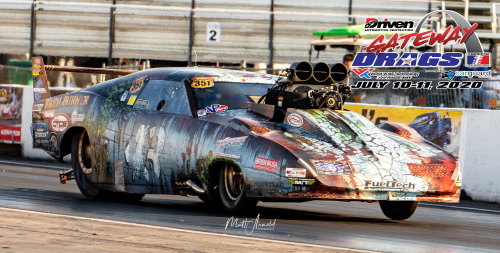 Madison, IL (July 8, 2020) – The American Drag Racing League comes home to World Wide Technology Raceway this Friday and Saturday for the 2020 ADRL Gateway Drags. On the heels of a hugely-popular season opener last month at the Texas Motorplex near Dallas, the ADRL comes to the St. Louis area ready to put on a drag race for the ages.

Leading the charge is the Pro Extreme class, an eighth-mile of fire-breathing Pro Mod excitement. With American muscle under the hood and exciting and colorful themes on the body, PX is guaranteed to thrill fans under the lights.

“The great thing about these cars,” said ADRL President Mel Roth, “is that they’re like the old drag cars back in the day. Back then, drivers went out of their way to create a personality for their race cars and that’s what we’re seeing now in our Pro Extreme class. These cars look like real cars, they sound like real cars, and they move down the track like nothing you’ve ever seen before.

“If you’ve never been to a drag race at World Wide Technology Raceway, I invite you to come out and see what all the fuss is about Friday and Saturday.” 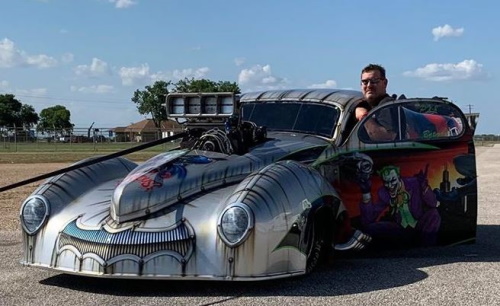 The series has provided standing room-only crowds and incredible drag racing since the early 2000s, with St. Louis being witness to some of the greatest moments in its history. ADRL’s 2009 race still stands as one of the best-attended events in the track’s history with a traffic jam consisting of eager fans backed all the way to the Gateway Arch. Thanks to the Stan Musial Bridge and expanded parking within the facility, fans won’t have to worry about heavy traffic, but can still expect breathtaking eighth-mile action on one of the best racing surfaces in the drag racing world.

Racers such as 2020 ADRL Dragpalooza winner Frankie “The Madman” Taylor, Bubba Stanton, Chuck Weck, John Sullivan, Travis Brandt, Michael Recchia, and more are en route to prove the Gateway to the West is also the gateway to the best drag racing in the country.

To print out FREE tickets or for the full schedule of events for this weekend’s 2020 ADRL Gateway Drags at World Wide Technology Raceway, click HERE.

Can’t make the race? SpeedVideo is streaming the entire event LIVE from WWT Raceway. Catch all the action by clicking HERE. Didn’t get a chance to get that Dragpalooza shirt? Can’t make it to the race this weekend, but still want the event merch? Head to the ADRL Store at ADRLDrags.com/Store.