CONCORD, NC (July 8, 2020) – The World of Outlaws NOS Energy Sprint Car Series kicks off a four-race swing from Iowa to Wisconsin to Indiana and eventually Ohio beginning Friday night. It begins to shape the next couple of months on the tour.

Following events Friday at 34 Raceway, Saturday at Wilmot Raceway, Sunday at the Terre Haute Action Track and Tuesday in the Ohio Logistics Brad Doty Classic at Attica Raceway Park, the World of Outlaws stars will turn their focus to Pennsylvania.

The Don Martin Memorial Silver Cup on Tuesday, July 21, at Lernerville Speedway remains one of the most historic events on the tour each year, and at $25,000 the biggest midweek payday all season. In addition, the previously postponed Gettysburg Clash presented by Drydene at Lincoln Speedway is rescheduled for Thursday, July 23, ahead of the July 24-25 Champion Racing Oil Summer Nationals at Williams Grove Speedway. 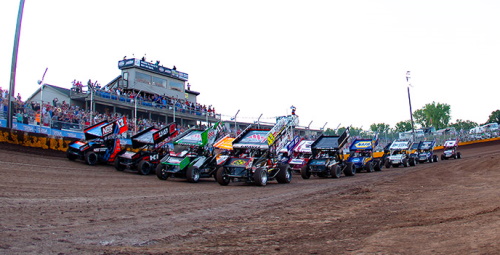 “These are some of the most challenging times we’ve ever experienced on many different levels,” World of Outlaws CEO Brian Carter said. “Our goal is to provide entertainment to our fans and high-level competition for our teams while also doing it as safely as we possibly can. We continue to work with local and state governments across the country, and in some cases it just doesn’t make sense to bring the Series to several of the locations that were originally scheduled given the current environment. Therefore, we’re doing our best to let our fans know where they can expect to see us over the next few months. And of course, they can always watch us on DIRTVision no matter where they reside.”

Mass gathering restrictions related to the COVID-19 pandemic have affected the events scheduled for July 31-Aug. 2 in New York. The event that was to run July 31 at Ransomville Speedway will be rescheduled for the 2021 season, and fans with tickets can use their same tickets for that event. The Empire State Challenge scheduled for Aug. 1 at Weedsport Speedway and the event Aug. 2 at Orange County Fair Speedway are canceled for 2020 and tickets will be handled through the tracks.

Two huge August weekends follow. First up is the Aug. 7-8 Ironman Weekend at Federated Auto Parts Raceway at I-55 with fully open grandstands. The World of Outlaws NOS Energy Drink Sprint Cars “Return to Racing” included I-55 in May with Brad Sweet and Kyle Larson winning a couple of thrillers.

The next week, Aug. 13-15, is “The One & Only” at Knoxville Raceway featuring the $50,000-to-win Brownells Capitani Classic presented by Great Southern Bank. Three World of Outlaws NOS Energy Drink Sprint Car Series races will run in place of the NOS Energy Drink Knoxville Nationals presented by Casey’s General Store with a total prize money in excess of $400,000. With limited three-day ticket packages available in advance, fans are encouraged to secure their seats at WorldofOutlaws.com before it’s too late.

Like normal, the Outlaws will head to North Dakota after Knoxville. The Series will invade River Cities Speedway Aug. 21 in Grand Forks and then head Aug. 22 to Red River Valley Speedway in West Fargo. The event originally scheduled for Dakota State Fair Speedway in Huron, SD, has been canceled, and fans will be contacted by SLS Promotions.

A major shift in the schedule will then take place. Rather than head towards the West Coast where local restrictions in several municipalities will make it impossible for the Series to compete, the Outlaws will aim to fill that stretch of the schedule from Aug. 28 through Sept. 19 with races that had been postponed in the spring when the sports world shut down.

Fans who purchased tickets to Black Hills, Santa Maria, Grays Harbor, Stockton and Calistoga will receive a credit for the face value of their ticket in their MyDirtTickets.com account. If a refund is preferred, CLICK HERE to request a face value refund.

All events, including The One & Only at Knoxville, will be broadcast on DIRTVision to Fast Pass subscribers.

For all the latest updates and information, visit WorldofOutlaws.com and follow on social media