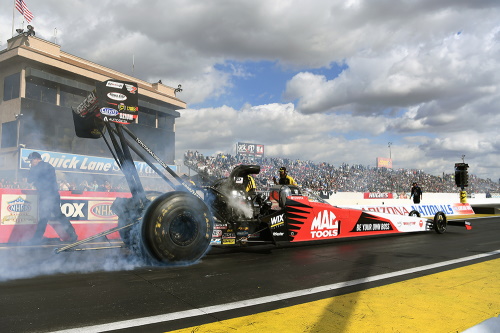 After two races Doug Kalitta and the Mac Tools Top Fuel team were riding a wave off dominant performances with two final round appearances including a third consecutive win at the historic Winternationals. The consistent world championship favorite had the Mello Yello points lead and momentum heading to the Gatornationals in March. When the season went on hiatus Kalitta and his team went to work getting ready for the season relaunch.

“Man, we were rolling to start the season,” said Kalitta. “I think we can pick up right where we left off this weekend. (Crew chief) Rob (Flynn) and the Mac Tools boys have stayed sharp and we have some good data for Indy. I am excited to get back there after our success last year.”

Last Labor Day weekend Kalitta broke through for his first U.S. Nationals win and used that win to propel his team to a runner-up finish in the Mello Yello Top Fuel point standings. This year Kalitta will get back into the Mac Tools Top Fuel dragster on Saturday looking to keep his Indianapolis win streak alive.

“The U.S. Nationals win was big for this whole Mac Tools team,” said Kalitta. “It was great to park the Mac Tools dragster in the winner’s circle and to also celebrate with some many of our great sponsors. This year we got off to a great start with new sponsors NGK Spark Plugs, Mobil 1 and RevChem, which I think will continue to pay dividends for us.”

This season Kalitta’s wins came at the expense of some of the biggest names in the class. On his way to the Winternationals win he defeated No. 1 qualifier Brittany Force in the semifinals and last year’s rookie of the year Austin Prock in the final. His reaction times were strong all day and his Mac Tools dragster was performing at peak levels. Two weeks later in Phoenix Kalitta took out Force again as well as three-time Top Fuel world champion Antron Brown before losing a close race to two-time world champion Steve Torrence.

“The competition in this class is fierce. You have to be on your ‘A Game’ in the first round or you could have a very short day. I did my job at the Winternationals and Arizona Nationals and I had a great race car. I am feeling good about this weekend,” added Kalitta.

Quotable: Kalitta on getting season re-started: “It has been a long time since I have been in the Mac Tools dragster. I don’t know if I have ever gone this long without making a run. I am not worried about shaking off any rust. Once I get strapped in I will be 100 percent focused.” 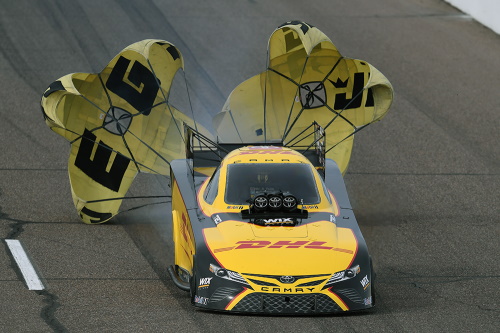 J.R. Todd and DHL Camry Eager to
Get Season Restarted on High Note

With the NHRA season rebooting this weekend at Lucas Oil Raceway Park outside of Indianapolis J.R. Todd, driver of the DHL Toyota Camry Funny Car is looking for a fresh start to the 2020 season as well. After the first two races of the season did not go as planned Todd and his DHL Funny Car team are geared up to make a move this weekend. The team will use the two days in advance of the NHRA National event to dial in Todd’s Nitro Funny Car with the hopes of racing to their third victory at the famed race track.

“We didn’t get off to a great start at the first two races but that is ancient history,” said Todd. “This is a whole new season starting this weekend and I feel good about our chances. We have had some success the past three years here so we are hoping to turn our luck around.”

Last Labor Day weekend Todd was racing to become the first Funny Car driver to win three U.S. Nationals in a row and he almost succeeded. Following his wins in 2017 and 2018 last season he raced to a semifinal appearance. His success behind the wheel of a Funny Car at this track does give Todd some confidence coming into this weekend.

“I know what happened two or three years ago doesn’t impact this season’s race but it still feels good to know that we won here twice and had some success last year,” said Todd. “I am really just focused on getting comfortable in my Toyota Camry Funny Car and making smooth consistent laps. I am looking forward to being at the track with all my guys and especially crew chief Todd Smith and Jon O (Oberhofer).”

With the move of former Funny Car teammate Shawn Langdon back to Top Fuel Todd is the lone Funny Car representing Kalitta Motorsports. The team is eager to show they can succeed in the highly competitive category throughout the Mello Yello season.

“I know Shawn will do great in Top Fuel. I don’t mind being the only Funny Car. We get so much support from Toyota and TRD and I can still talk with Shawn and Doug about the track. The Kalitta teams all work together. We have three great race cars over here and I am excited to get some more round wins with this DHL Toyota Camry Funny Car,” added Todd.

Quotable: J.R. Todd on getting season re-started: “I have been working out at PitFit to keep my reaction times sharp as well as some cardio. It is tough to replicate the power of these race cars. I know once I get strapped in everything will come back to me. I can’t wait to make that first run.” 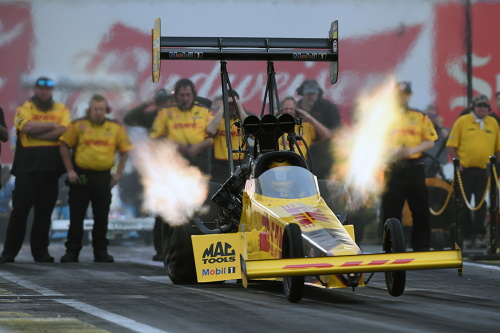 A four month layoff from NHRA Mello Yello Drag Racing has not kept DHL Top Fuel driver Shawn Langdon from staying on track and sharp for the return this weekend to racing action. Since the Arizona Nationals Langdon logged time in his iRacing simulator during the months of March and April and as race tracks began holding sportsman bracket races Langdon was one of the first to hand over a tech card. By his account he has raced 24 days and made 132 passes in his sportsman dragster all with an eye on keeping his competitive edge on the starting line when he straps back into his 11,000 horsepower DHL Top Fuel dragster.

“I think the bracket racing helps,” said Langdon. “It isn’t the same of course but you do get into a racing mindset and I think just having seat time is important. The biggest difference is I am doing everything myself at these bracket races usually. I think that will be a big plus once we get back to racing. I have been pretty hard on myself at some of these past races but I am ready to get back to the track for sure.”

While Langdon has been racing his team has been preparing so they can come out swinging. All the Kalitta Motorsports teams will be testing for two days leading up the NHRA Nationals at Lucas Oil Raceway Park on July 11-12. The races will be televised on FS1 on Saturday and Fox national broadcast on Sunday. The added national exposure to get the season restarted also has Langdon excited.

“I think it is cool we will be on big FOX on Sunday,” said Langdon. “Motorsports has been the only major sport on TV lately and you have seen good ratings. I am hoping a lot of people will tune in to FS1 and then FOX on Sunday to see this DHL Top Fuel dragster go some rounds. It will be interesting to see how we stack up against everyone else after this layoff.”

A full field of Top Fuel dragsters and Funny Cars will be on the property and with only two qualifying sessions on Saturday every run will count for positioning as well as qualifying bonus points. Two races into the season Langdon is sitting in eighth place in the Mello Yello point standings. He knows that a strong showing this weekend will help him close the gap on Top Fuel point leader and teammate Doug Kalitta.

“There isn’t a Countdown anymore so we need to start closing the gap on Doug this weekend so we can have both Kalitta Top Fuel dragsters at the top as we move into the season. These two Indy races are important. We want to get some round wins and hopefully wind up racing that Mac Tools Top Fuel dragster in the final,” added Langdon.

The season will be a gauntlet of back-to-back races as the teams move beyond Indy. Langdon knows throughout the layoff having the support of all the Kalitta Motorsports sponsors has been and will be a key to the championship run.

“We know we have a race car and team that can win races this season,” said Langdon. “The support we get from sponsors like DHL, Toyota, Mobil1, Fifth Third Bank and Sealmaster makes all the difference. We brought on some new partners before Pomona including Ozium and RevChem Composites too that will be great contributors to our success. We used to say the season is a marathon not a sprint but I think we will a sense of urgency for sure starting this weekend.”

Quotable: Langdon on getting season re-started: “I tried to stay as sharp as possible with iRacing and then bracket racing. I have made a lot of passes lately and I am hoping that gives me a little bit of an advantage. I think once we fire up the DHL Top Fuel dragster and make a couple runs we will be in great shape.”