CLERMONT, Ind. (July 10, 2020) – It has been nine long, interesting months since TJ Zizzo piloted the Rust-Oleum Rocket down an NHRA Mello Yello Series drag strap, doing so at World Wide Technology Raceway near St. Louis last September. His most recent official pass was a lap of 3.769 seconds at 329.75 mph, that speed being a personal best. Friday, the Chicagoland-based Top Fuel team rolled through the waterbox at Lucas Oil Raceway to drop the hammer for Zizzo Racing’s first run of the year in preparation for this weekend’s E3 Spark Plugs NHRA Nationals. This weekend’s event is the first of three total NHRA points races here with the second coming next weekend, and the third being the US Nationals on its traditional Labor Day weekend date. 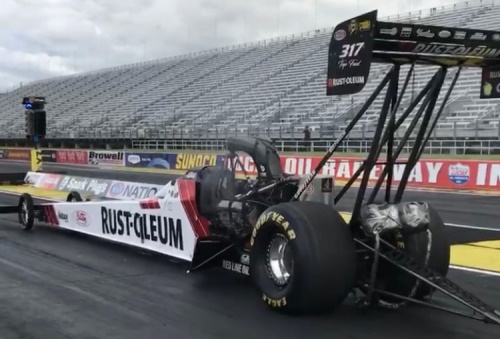 (Zizzo Racing took to the track for testing Friday at Lucas Oil Raceway, the site of this weekend’s E3 Spark Plugs NHRA Nationals, the first NHRA Mello Yello Series event since the season was put on hold in March. Photo Credit: Tyler Evoniuk)

“It’s official! We’re in Indy!” said a visibly-excited Zizzo. “It’s been a long time. It’s been almost 10 months since we’ve been on the race track. We’re good at it, though. We’re certainly good at missing time and doing well and performing at our highest level. The only little downside is that we’ve changed everything that makes this car go. We’ll have to sort through that at Friday’s testing. For example, we’ve changed ignition due to rule changes. We have changed fuel pumps, we have changed clutch management systems, we have changed a plethora of things. So we’ll test on Friday and hopefully be ready for Saturday.”

This weekend’s #IndyNats is the first NHRA Mello Yello Series event since the series, like the rest of the country, went on lockdown due to the pandemic stemming from the COVID-19 virus. The NHRA has worked with teams and facility staff to ensure fans have the safest-possible event and are working to minimize contact while maximizing social distancing. One of the ways the Glendora, Calif.-based sanction is working to help fans stay safe is by knocking two rounds of qualifying off the schedule. Two rounds will be run Saturday with eliminations running as usual on Sunday. 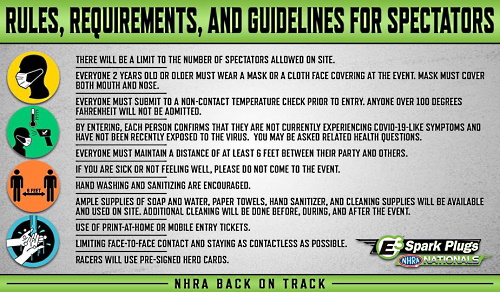 Zizzo, like many drivers, is a fan of the format.

“I think it’s cool!” he said. “I think two rounds of qualifying is fantastic. I think it’s exciting for everybody; fans, team members, drivers, everyone’s gotta be on their game. There’s no going back to the hotel on a Friday night and thinking about everything you screwed up on a Friday and adjusting for Saturday. You better be on it or you’re going home, period. I don’t care if you’re the No. 1 guy in points or the fastest car in the country or whatnot, you could be going home very easily on a Saturday night.”

At last year’s Big Go here, Zizzo was the 16th entrant into the fastest Top Fuel field in history after a strong weekend of qualifying in the heat. This year, as they have in recent years, Zizzo Racing has momentum, with their last race resulting in a personal-best speed. The team also has the advantage of being a quality on-track competitor despite only running sporadically throughout the year. This weekend, all the teams are starting on mostly-even footing.

For the crew of the Rust-Oleum Rocket, the season never ends. They work on their dragster year-round, a schedule that continued throughout the spring when it was safe to do so. Zizzo said his group is champing at the bit to get back to burning nitro at the drag strip.

“Lot of excitement!” he said. “Our team is definitely excited about getting out of the shop. Our guys never stopped working on this car. I’m surrounded by some wonderful people who never stop working and thinking about our race car. That’s the reason we’re successful. That’s the way our team is wired and it all starts from the top and the top is my dad (Tony). All is good there, we’re looking forward to it.

“It will certainly be an event that will try our patience. There’s no doubt about that. It’s going to be hot, it’s going to be humid, there will be different rules, a lot of rules to follow, 56 pages of rules that will need to be followed by our team members and fans, so it’s going to test a lot of people’s patience. We’re just going to have to take a deep breath and smile and just try to get through it. Even filling out our tech card in our shop was interesting. Everyone will take precautions and be healthy, we’ll do a good job on and off the race track as we always do, and we’re excited to go!”

Zizzo In The Media: TJ was featured in the Interview Issue of Drag Illustrated. Check out the piece by clicking HERE!

The E3 Spark Plugs NHRA Nationals at Lucas Oil Raceway kicks off Saturday with nitro qualifying scheduled for 12:30 p.m. and 4 p.m. EDT with eliminations kicking off Sunday at 9 a.m.