ALTON, Va. (July 10, 2020) – Blackdog Speed Shop and driver Michael Cooper left Virginia International Raceway on Friday hoping their bad luck is out of the way for the rest of the Pirelli GT4 America Sprint weekend.

Cooper and the No. 10 McLaren 570S GT4 finished 14th in the first of three 50-minute races on the weekend. After claiming a victory in the season’s opening event of the season at Circuit of The Americas, Cooper was set to challenge for a third podium in three races. A mechanical issue at the rear of the McLaren sidelined Cooper for two laps early in Friday’s race and knocked him from the championship lead. 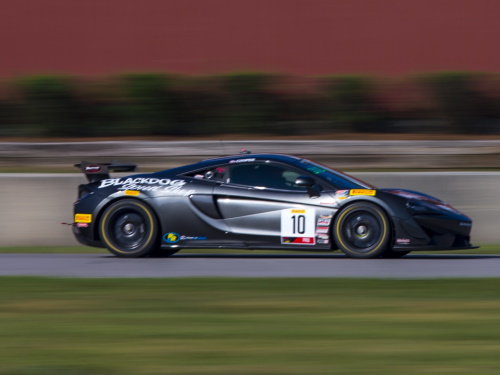 A three-time series champion, Cooper ran fourth in a train of lead cars about 12 minutes into the race. He lost boost power from the turbocharger about halfway through the lap and nursed the McLaren into the pitlane. Blackdog crew members quickly diagnosed an issue with the turbo intake manifold, tightened up things under the car’s rear bonnet and sent Cooper back out.

The McLaren returned to the pitlane near the end of the race with another boost issue but completed enough laps to score points. The team sorted the issue Friday afternoon and evening, which means Cooper will start Saturday morning’s race fourth on the grid with starting positions based on fastest race laps from Friday. The VIR event is the first for Pirelli GT4 America and SRO America following a months-long shutdown due to the COVID-19 pandemic.

Blackdog Speed Shop will race at 9:25 a.m. ET Saturday and 3:45 p.m. ET Sunday from VIR. Each race will stream live on gt4-america.com.

MICHAEL COOPER, NO. 10 BLACKDOG SPEED SHOP McLAREN 570S GT4: “Definitely not the start we wanted this weekend. We were all hopeful of coming back from the shutdown and regain the momentum from Circuit of The Americas. There was no catching the Porsche today, but I felt like I was in a decent spot early on and decided to conserve some tire life. Without warning we lost all boost pressure and had to come in for the Blackdog guys to fix it. The second issue didn’t hurt us in terms of points and that took the guys a little longer to resolve but it seems to be sorted. Hopefully we can go back to the front Saturday and Sunday.”