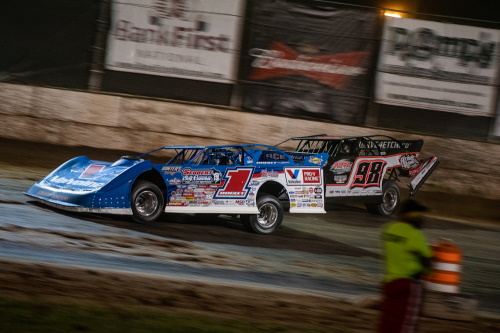 Plymouth, WI (July 11, 2020) – Racing at the gorgeous Outagamie Speedway, 17 miles away from the Green Bay Packers’ iconic Lambeau Field, Brandon Sheppard and the Rocket1 Racing crew made their own case as to which organization is truly “Title Town.” Leading the final 18 laps for his seventh win of the 2020 campaign, Sheppard extended his points lead as he continues to aim for a third World of Outlaws Morton Buildings Late Model Series championship, compared to Aaron Rodgers’ one Super Bowl title.

The 62nd triumph of Sheppard’s marvelous, yet still so young career didn’t come without some wild and wacky run-ins over the course of Friday’s 50-lapper. Assuming the lead on the 33rd circuit after a heavyweight title bout with Jason Rauen, “The Rocket Shepp” became the fourth different leader with the fifth and final lead change of the race. A late-race restart with eight laps left made it interesting for a standing-room only crowd in Seymour, Wisc., but challengers Darrell Lanigan and hometown hero Nick Anvelink just couldn’t match the overwhelming prowess of the Rocket1 Racing, Valvoline No. 1 machine.

“We’ve got a great crowd here and had a great track to race on, it doesn’t get much better than this,” Sheppard said in victory lane. “I was little worried in the heats when it was bottom dominant, but the track crew stayed right with it and gave us a really racey track for the feature. That was a lot of fun!”

Starting fifth in the 50-lapper, Sheppard bided his time from the third row while an all-out war waged in the opening stint. Going three-wide for the lead at one point, it was Dennis Erb Jr. of Carpentersville, Ill. on the bottom, Ashton Winger of Hampton, Ga. through the middle, and Jason Rauen of Farley, Iowa railing the high side. Officially, Erb controlled the opening lap aboard his Rocket Chassis No. 28, but then 20-year old Winger wheeled to the front on laps 2-4, before Rauen rocketed around the outside and got the top spot on lap five.

The battle at the front really heated up when Rauen and Winger found their way into dense lap traffic with seemingly no moves on the table. As lap cars ran low and high, a boxed in Rauen forfeited all his ground and allowed Winger to close right in. Taking the lead back on lap 13, it looked as if the Rookie of the Year leader might make a run for it and sneak through the back markers, but disaster struck the next time by in turn four. Just as quickly as he snatched the lead back, the lead was ripped away from Winger when contact from Rauen sent the No. 12 spinning to a stop bringing out the second caution. 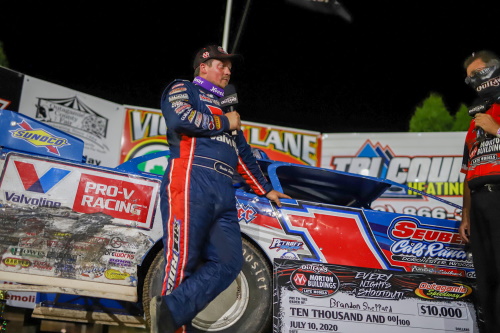 Capitalizing on the incident, Sheppard positioned his No. 1 in row two on the restart and immediately pointed it to the second spot as the green dropped. Hounding Rauen like a dog chasing a bone over the next 20 laps, Sheppard methodically followed the No. 98 machine around the 1/3rd-mile and through lap traffic, but struggled time and time again to actually make his move. The duo went side-by-side on a handful of occasions, but it wasn’t until lap 33 that B-Shepp was finally able to wrestle the lead away from Rauen with a perfectly executed dive to the bottom of turns one and two.

“I was trying to give him plenty of room, but man he wanted to run into me real bad there,” Sheppard noted of his long duel with Rauen. “I don’t really know what was going on there. We could roll the middle real well through turns and one two though, and that’s when we were able to get underneath him. I’m not sure what happened with him and Ashton, but I would’ve really like to race with him for another win.” 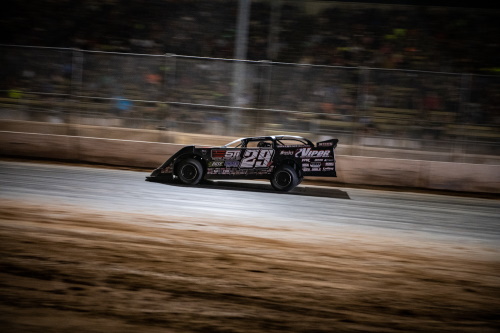 Darrell Lanigan continued his impressive summer turnaround with a second-place effort in the No. 29V. (Jacy Norgaard Photo)

After Sheppard took the lead with 17 to go and set sail, all eyes turned to the battle for second which was brewing between Rauen and Darrell Lanigan, who established the Outagamie Speedway late model track record at 14.322 seconds in qualifying. Their intense boxing match hit its own boiling point on lap 42 when a turn three slider from Lanigan found Rauen’s front end and sent the No. 98 spinning in the same location of Winger’s lap 14 heartbreak.

Lanigan, of Union, Ky., made it interesting on the final restart as he chopped away at Sheppard’s lead, but ultimately ran out of time and real estate to track down the No. 1. While Sheppard picked up his seventh win of the year, Lanigan continued his mid-season resurgence with yet another stellar finish aboard the Viper Risk Management Group No. 29V Barry Wright Race Car.

“We just needed to get through all that lap traffic to be able to do anything more, it was just so hard to pass in all that traffic,” Lanigan said of his potential in the feature. “All in all, we had a great car. We’ve all been working so hard lately and this turnaround we’ve been on has been awesome.”

Rounding out the podium with the most noteworthy story of the night was Nick Anvelink of Navarino, Wisc., which is just a 15-minute drive from Outagamie Speedway. Competing in front of his home crowd, the three-time and defending Dirt Kings Late Model Tour champion delivered the performance of a lifetime, setting a new career best with a third-place effort against the World of Outlaws Morton Buildings Late Model Series. Stepping up the podium after climbing out of his car, Anvelink was welcomed with a roaring applause from the local fans.

“Anytime you can go forward against the World of Outlaws, it’s a good night,” Anvelink noted afterwards. “I thought we’d be able to get up there and race with those guys for a win, but we just didn’t take off on that last restart like we had been. This has me real excited for tomorrow. Plymouth has never been all that kind to me, but hopefully this setup will give us a good starting spot. Qualifying is everything with these guys, so if we can turn a good lap maybe we’ll have a chance to go for another win tomorrow night.” 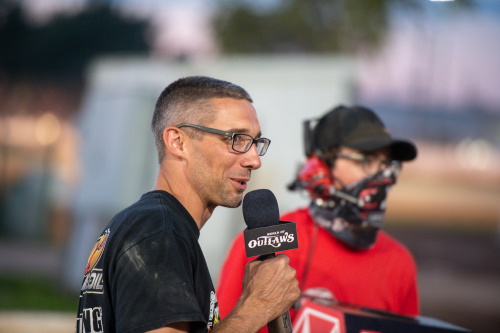 Nick Anvelink was the hometown hero on Friday night with a remarkable 3rd-place finish against the World of Outlaws. (Jacy Norgaard Photo)

Closing out the top five on Friday night was Ricky Weiss of Headingley, Man. with a solid 12th-to-fourth recovery in his Drydene Performance Products No. 7 and Rodney Sanders of Happy, Tex. with a career-best fifth place finish in the Jimmy Mars owned MB Customs No. 20.

The World of Outlaws Morton Buildings Late Model Series resume the Northern Swing tomorrow night with a trip to Plymouth Dirt Track in Plymouth, Wisconsin. Tickets are available for purchase HERE or can be bought at the gate. As they do every night, DIRTVision will have a live broadcast for all the fans unable to attend. 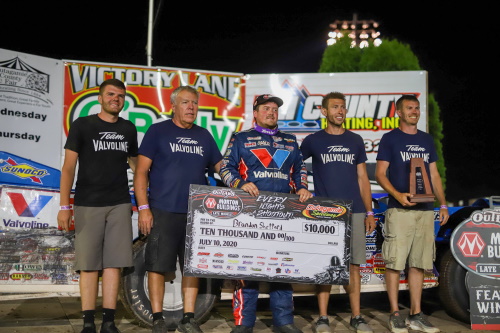