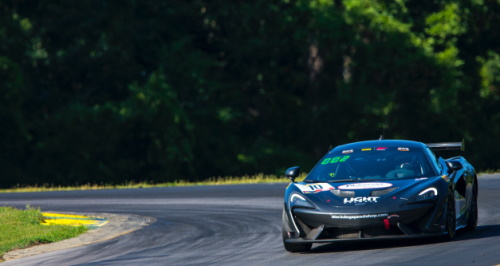 ALTON, Va. (July 11, 2020) – Michael Cooper and Blackdog Speed Shop saw their fortunes reversed in a big way Saturday morning with a victory in the second of three races in the Pirelli GT4 America Sprint Championship at Virginia International Raceway.

Cooper took a come-from-behind, 1.859-second victory in the No. 10 Blackdog Speed Shop McLaren 570S GT4. It was his second win in four races to start the season and vaulted him into the GT4 America Sprint Championship lead heading into Sunday’s weekend finale. Blackdog Speed Shop added to its class-leading win tally, now at 31 since 2013.

The victory came a day after multiple turbo-related issues with the car forced Cooper to the rear of the field after Race 1. The Blackdog Speed Shop crew worked into the evening to the resolved the issue, and Cooper was satisfied with a late-day lap to evaluate the McLaren before the team left the track Friday night.

Starting fourth Saturday, Cooper wasted no time putting the hammer down in the No. 10 McLaren. He gained a spot on the opening lap in a tense side-by-side fight with Drew Staveley’s Mustang for three corners before emerging with the third position.

Cooper immediately went on the attack and passed Jarrett Andretti’s McLaren near the same spot and entering the Uphill Esses, stuffing the No. 10 McLaren on the inside of the 90-degree left-hander. 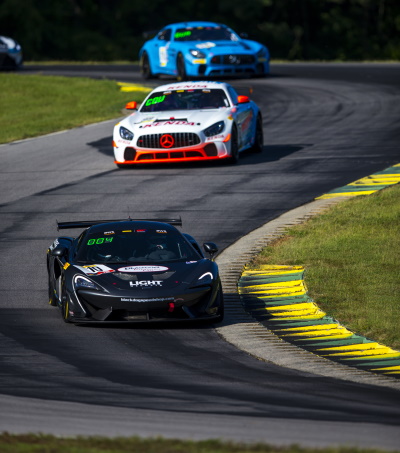 Unfortunately for Cooper, the battles with Staveley and Andretti allowed Spencer Pumpelly’s Porsche to build a five-second lead… until a full-course caution with 17 minutes left brought Cooper right on the back of the leader. Cooper wisely scrubbed his tires and built up temperature and pressures in his Pirellis and swallowed up Pumpelly on the restart.

Again, a strong drive off Turn 3 allowed Cooper to dive to the inside at Turn 4, complete the pass and pull away.

Blackdog Speed Shop will wrap up its weekend with a 3:45 p.m. ET start Sunday from VIR, where Cooper will start second. The race will stream live on gt4-america.com.

MICHAEL COOPER, NO. 10 BLACKDOG SPEED SHOP McLAREN 570S GT4: “It feels awesome to get this result with Blackdog Speed Shop and McLaren after the day we had yesterday. It was one of the worst days I’ve had as far as results go, so to turn it around builds great momentum going forward.
“I thought it was going to be a short yellow late in the race with where the parked car was stopped… right at pit entry. I knew there would be enough time left to pressure Spencer, but with the pace of the Porsche I had to make the restart count. He slipped up in Turn Three and I got through there well, we went side-by-side through Turn Four. That was pretty clean racing. We were giving each other just enough room, and I was able to get around and pull away.”