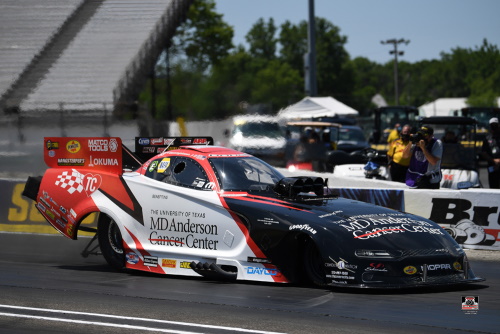 BROWNSBURG, Ind. (July 11, 2020) – A four-month hiatus couldn’t slow down the momentum Tommy Johnson Jr. and the MD Anderson Dodge Charger SRT Hellcat Funny Car team built during the first part of the 2020 NHRA Mello Yello Drag Racing Series season before it was suspended due to the COVID-19 global pandemic.

Johnson, who entered race weekend as the most recent Funny Car winner on tour, put down an impressive Q1 blast of 3.983 seconds at 317.72-mph to earn the E3 Spark Plugs NHRA Nationals No. 1 qualifying position right out of the gate.

“It’s just a great start after such a long layoff and all the uncertainty,” said Johnson, who claimed the NHRA Arizona Nationals victory in February. “It’s great to be able to carry the momentum from Phoenix right into this race and not miss a beat. The guys worked hard those four months so to be able to give them a No.1 qualifier right out of the box and just carry that momentum is really good. I have a really good race car and it shows that Phoenix wasn’t a fluke. It was a good race car and is continuing to be.”

While Johnson’s stout Q1 pass allowed him to bank three bonus points, and pick up his 19th No. 1 qualifier award, it set him up for a less-than-favorable first-round matchup versus his Dodge Charger SRT Hellcat teammate, Ron Capps. Both Capps and Johnson are focused on securing their first Lucas Oil Raceway victories, and Johnson knows that an Indy win could boost him from second in the Funny Car point standings up to the top of the leaderboard.

“It’s going to be a tough day tomorrow because the conditions are going to be so different,” said Johnson, a resident of nearby Avon, Ind. “Today was really irrelevant for tomorrow, but it’s good to know that we have a good baseline and can go from there.

“Testing on Friday before the event was so valuable. You can’t put a price on that because we probably wouldn’t have qualified if we hadn’t tested with the issues we had with the new body and being able to work through some things. We also found a problem with one of our controllers for the clutch and the fuel system. To find those issues on Friday and be able to run so well on Saturday, it just shows you that we needed a couple of runs to work everything out after being off for four months.”

The Competition: No. 16 Ron Capps 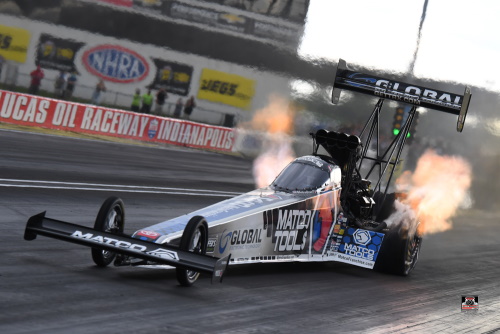 The Competition: No. 3 Terry McMillen

Quotable:
“We’re observing everything. The first run out today, our car was on a great lap just like Tony’s (Schumacher) car was and we were both the two quickest to the 330-foot mark, so that gives us a lot of hope going into tomorrow. It will be different conditions in the morning and the racing is looking like it’s going to be really, really good. It looks like we’ll be able to put our cars back to normal like how we ran them in the first two races, and we’re going to get after it. We’re going to go out there, put our best foot forward and give it all we’ve got. Tomorrow is a brand-new day and that’s the way we’re going to take it. The game plan is to keep it on all eight and turn on some win lights.” 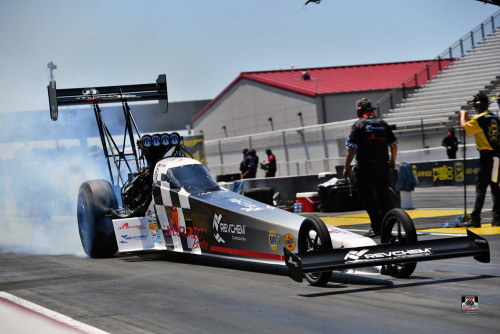 The Competition: No. 5 TJ Zizzo

Quotable:
“Testing was good yesterday, getting used to the canopy. It didn’t take much getting used to it, it’s such an awesome thing DSR developed. I’m really comfortable in the car. We’re trying to put down a lot of power and the track is not having it right now, so we’re going to make some adjustments. I have nothing but confidence in my crew chief Todd Okuhara, and this whole team, and we’ll stand up when it’s time to stand up, and we’ll make a point tomorrow.” 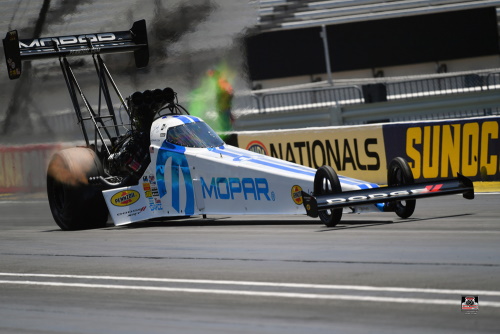 The Competition: No. 7 Tony Schumacher

Quotable:
“We have Tony Schumacher first round. He has a long list of success here at Indy but this is not the U.S. Nationals. This is the Indy Nationals and this Mopar team is definitely ready to fight this fight, and we’re looking forward to the competition tomorrow. We have a long night ahead of us as we triple-check everything. I’m going be on my practice game tonight, and I’ll have my race face on tomorrow, even under the mask.” 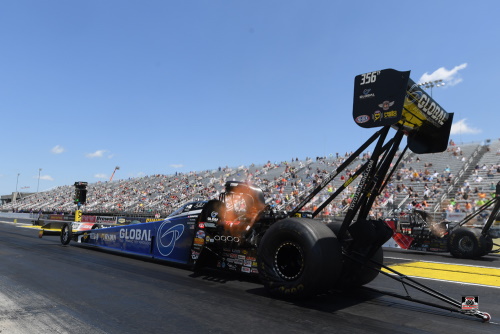 The Competition: No. 10 Leah Pruett

Quotable:
“We’ll run against my teammate Leah Pruett in round one, and we’ll get up in the morning and do our jobs. We’ve got a good car. We’ll do it nice and smooth down the race track, and get after it. We’ve got great guys over here. I didn’t get as many laps under my belt as I wanted. Only made two test runs and then got one qualifying run due to weather. We’ve got a great car with Global Electronic Technology, Rydin Decal, Matco Tools, Pennzoil and Toyota. Our partners are tremendous. They gave me a gift; a gift to go out and race a couple more races in Indy. We’ve got great guys in the trailer, outstanding people working on the car. We’re going to go get it done.” 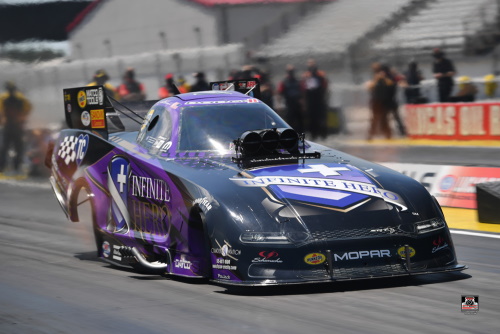 The Competition: No. 14 Mike McIntire

Quotable:
“I felt like I’ve had the emotions of four races in one day here. Now that we’ve lost the first two qualifying runs, and the fact that 18 cars showed up, we knew qualifying was going to be a nail-biter. We just didn’t think it would be for us. We made two test runs and then when we go out there for the first qualifying run, it just wore a ton of clutch early. Every once in a while, these cars will reach up and bite you. Now, not a big deal if you have three more qualifying runs. Huge deal for us because we weren’t sure if that run was a fluke or if we needed to address something and the guys kind of split the difference. We limped it down there and wound up being second-low E.T. of the second session, and that tells you that you’ve got a good combo because even when you miss it, you still can run quick enough to be second-low. We ‘front halved’ the car during the downtime, so we are listening to what it is telling us. It’s going to be a little bit different until we get more runs on that tubing. If we get four more runs tomorrow, we’ll all be happy. I always think we have a car good enough to win the race. Qualifying third kind of underscores that for me.” 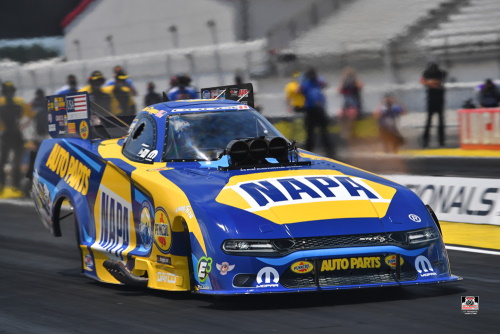 The Competition: No. 1 Tommy Johnson Jr.

Quotable:
“I have no idea what happened yet to make the car shut off in Q2. It was something in the ignition apparently, and the crew guys are going through everything right now to try and determine what it was and get it repaired for tomorrow. As far as facing a teammate in the first round, that’s never what any of the DSR cars hope to do. You always want to face your teammate in the final round of eliminations.

“It feels incredible to be back at the track. I was blown away by the politeness of all the fans and everybody adhering to all of the physical distancing requirements and doing everything they’re supposed to do in order to make sure everyone is safe. It was great to see fans in the grandstands. I’ve always said NHRA has the best fans, and this proved it today. Thank you to everyone that came out.” 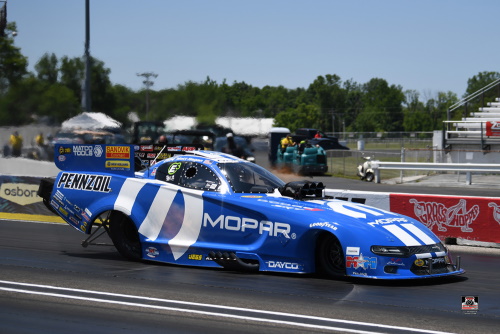 The Competition: No. 11 Dan Wilkerson

Quotable:
“All in all, it was a great qualifying day. Really glad to be a part of NHRA and I want to thank the sanctioning body for bringing the fans back out. We’re one of the first motorsports series to do that. Our Mopar Dodge Charger SRT Hellcat is running well, and we have Daniel Wilkerson in the morning. I love the Wilkerson family. Timmy and his boy, they’re just amazing people that you look to as role models because they’re really good guys. But, it’ll be fun to get back into competition mode tomorrow. Our car is running strong, we had two good laps today. It was hot today which it makes it a little trickier to be able to navigate the track, but the conditions will be different tomorrow. I’m excited. It’s going to be an early morning tomorrow. We warm up at 6:45 a.m., so I’m going to eat a good steak dinner tonight, get some rest, and get ready to do this tomorrow.”