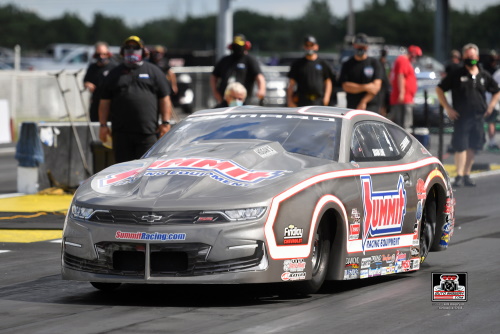 Brownsburg, Ind. (July 11, 2020) – After a four-month break in the action due to the COVID-19 pandemic, Team Summit showed up at the E3 Spark Plugs NHRA Nationals well-prepared and in fine form. Jason Line, driver of the silver Summit Racing Chevrolet Camaro, made it clear that he intends to make his final season as a Pro Stock driver memorable – both for himself and for his competitors.

Minnesota native Line laid down a powerful 6.626-second pass at 206.10 mph in the opening session that moved him right into the No. 1 position, and not one driver was able to dethrone him at Lucas Oil Raceway at Indianapolis. Line secured the 56th No. 1 of his career and first since Brainerd in 2019, where he went on to win the event.

The second session of qualifying brought about a blazing 130-degree Fahrenheit racetrack beneath bright sun and air temps hovering in the high 80s. The potentially challenging conditions were not a factor, though, as Line’s Chevy simply wouldn’t start when his number was called.

“You’ll have to see Michael Hiner for that one,” joked Line, whose longtime friendship with Deric Kramer’s crew chief has been a hotbed for mutual antagonization. “Michael didn’t want me to make that run, so he borrowed a part off of my car and decided he didn’t want to put it back on. Anyway, we have it fixed, and we’re ready for tomorrow – but Michael is now two inches shorter than he was.”

With his good-natured jabs at his respected colleague out of the way, Line gave kudos to Summit Racing teammate Greg Anderson for the powerful pass that locked him into the lead.

“I have to give Greg the credit for that,” he said. “He worked very hard, way harder than I did. The whole team worked hard. It’s a strange time right now, and not any of us know exactly how to handle these unusual circumstances, but we did the best we could to prepare for this weekend and getting back to racing. It was a good run, even though we didn’t get to make the second session. We’re off to a good start.” 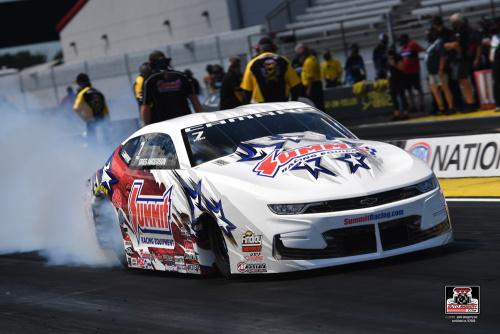 Anderson was outstanding in the warmer second session and clocked a best-of-the-round 6.642 at 207.53 mph – top speed of qualifying. He is No. 4 and will race Troy Coughlin Jr. in the first round.

“Four of the KB Racing cars are fast, and there are two more that we have to pick up a little bit, but it certainly looks like we have the performance. We just have to put the round pegs into the round holes. Jason and I are the two best so far, and that’s great news for us, but there are a few runs to make, yet, before anybody can win this event.”

Summit Racing teammate Bo Butner wheeled his KB Racing-powered Strutmasters-branded Chevrolet Camaro to a best time of 6.684, 205.72. In the first round of qualifying, his 207.30 mph was top speed. Butner qualified in the No. 14 position and will race Erica Enders in round one.

“Today was different with just two qualifying sessions to set the field, but I’m kind of excited,” said Butner. “My burnout wasn’t the best in Q1, and that hurt the run a little bit and probably caused us to be a little safer for Q2. When you just get two runs, you have to go A to B no matter what – especially when there are 21 cars trying to make a 16-car field. Anyway, we’ve got a good first round tomorrow with Erica Enders. I like our chances a lot. That team is already good, but we’re going to get way better. We’re going for ‘most improved’ tomorrow.”

Eliminations for the E3 Spark Plugs NHRA Nationals will begin at 9:00 a.m. ET on Sunday, July 12 2020, at Lucas Oil Raceway at Indianapolis.