CLERMONT, Ind. (July 12, 2020) – Any round win earned during NHRA Mello Yello Series competition is a good thing, but sometimes, it’s not as good a thing as it should’ve been. TJ Zizzo went 1-1 Sunday at Lucas Oil Raceway in the E3 Spark Plugs NHRA Nationals, the team’s first race of the year and the series’ first event since most of the nation was shut down in mid-March due to the COVID-19 pandemic.

Zizzo earned the E1 victory against Cory McClenathan with a 3.778-second pass at 326.40 mph, one of the quickest Top Fuel passes of the weekend. Unfortunately, the Chicagoland native fell to Billy Torrence in Rd. 2, Zizzo’s 3.822-second lap at 319.14 mph unable to top Torrence’s 3.768-second run.

In the first round of eliminations, Zizzo, the fifth-place qualifier, faced McClenathan, who entered the day starting from the 12th position. Zizzo commenced his burnout in the Rust-Oleum Rocket and began backing up. However, when MacClenathan tried to back up, nothing happened. 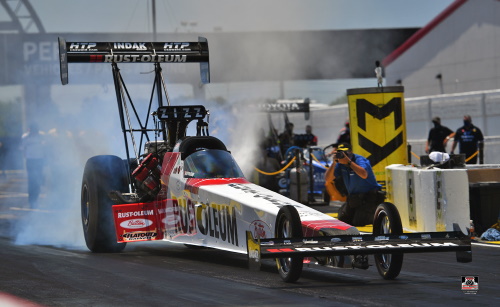 “Cory Mac couldn’t get it in reverse,” Zizzo said. “Absolutely spotted that right away when I was backing up from my burnout. They tried vigorously to get it worked out, it didn’t happen. The team ran out to push them back and at this point, we’re ready to stage the car. It took them a long time to push the car back, which is understandable, everyone has troubles.”

While Zizzo and the Rust-Oleum crew understood MacClenathan’s woes, they also understood the longer their rail sat idling, the better the chances were the car would run out of fuel. When that happens, engines can tear themselves apart, which is what happened to the Zizzo Racing dragster.

“Our car sat for two-and-a-half minutes from the time I started it to the time I staged it,” he said. “By that point, it had burned a lot of fuel, two gallons more than normal. The starter and I didn’t communicate as well as I would have liked as a driver. My team told me to put it in, I put it in stage, I went down the race track, and I blew it up right at the finish line because we ran out of fuel.”

Zizzo spoke to NHRA officials both at the top end and at the starting line and said everything is resolved. He said Cory Mac also stopped by the Rust-Oleum pit to talk about the situation as well. 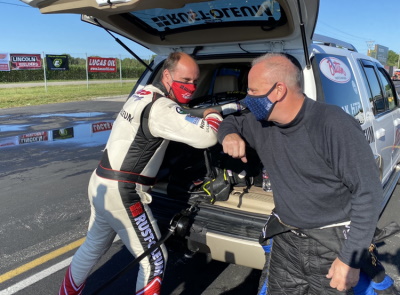 TJ greets Rd. 1 opponent Cory McClenathan in the staging lanes prior to strapping in. Photo by Tyler Evoniuk

Beyond the drama, Zizzo said he was pleased with the team’s performance this weekend and is looking forward to getting back on the track here again next weekend.

“The car ran well, it ran good, although it was 30 lbs lighter than it was all weekend because we burned fuel at the starting line,” he said. “Billy Torrence, man. They’re a first-rate team. Billy Torrence, Steve Torrence, right now, they have the best cars on the property. I looked at the ladder yesterday and I knew we’d have to go through both of them to win this event, which would make us look like heroes.